There are a ton of Nerf guns out there to choose from, but forking out hundreds of dollars for them is not for everyone. Spending a day’s wage (or more) on a big Nerf blaster can be hard when the small ones are still cheap and fun.

You might be saying, “Isn’t any Nerf Gun under $5 just trash?” and the answer is no. You aren’t going to get anything super fancy, of course, but you get a little slice of joy for a very fair price.

These cheaper ones get the basic job done and have something other Nerf blasters don’t; compact size. These guns will fit in your pocket and make a perfect toy for a fun sneak attack!

These small pistols are easy to use and have provided hours of entertainment for countless people worldwide.

Now that you know what to expect in this low price range, let’s check out the best Nerf guns for $5 or less!

You can still find Nerf guns for $5 or less, but prices often change.

The best $5 Nerf gun is the Nerf Elite Jolt due to its ease of use and popularity. It is a single-shot, spring-powered blaster that shoots well. It is a fan favorite Nerf gun due to its small pocket size and reasonable price.

It is one of the most common Nerf guns and is a basic gun that does what it is designed to do — shoot those darts!

Enjoy our list of these very little blasters that won’t break the bank! 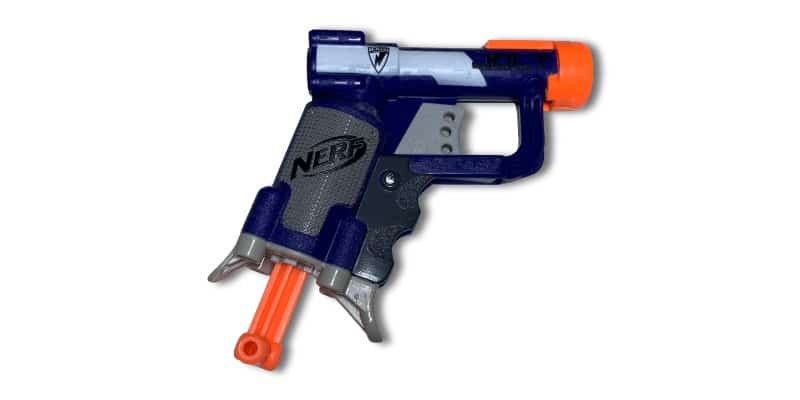 The Nerf Jolt was the beginning of the small backup pistol style Nerf gun and was first released in 2011.

It is designed well as the extra pieces on the grip make it easy for even larger hands to hold.

The Jolt may be small but still shoots hard enough to feel.

Most other small blasters like the Jolt are actually the same gun with a different shell. Some people refer to these small single-shot blasters as “Jolt Reskins.”

It is still really cool to see so many options of similar style blasters as they work great, and everybody has their own style.

The are many versions and colors of the Jolt available; for more info on these, you can check our detailed Nerf Jolt Review! 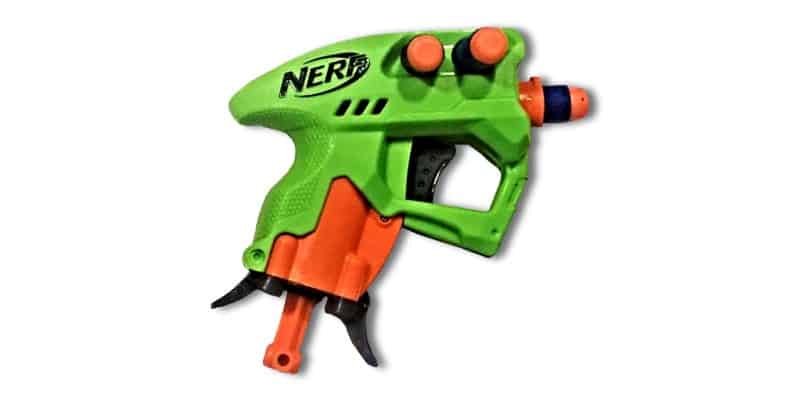 The Nerf NanoFire is a slightly bulkier version of the Jolt that includes two slots for ammo storage.

Instead of fumbling in your pockets for your darts, you can have them ready to load right on the gun.

It also includes three darts instead of two, so you have a little more firepower out of the box.

One bad thing about having the darts in the storage spaces is that it makes the blaster harder to hide.

Other than that, this is a great value blaster that is available in a few different colors. 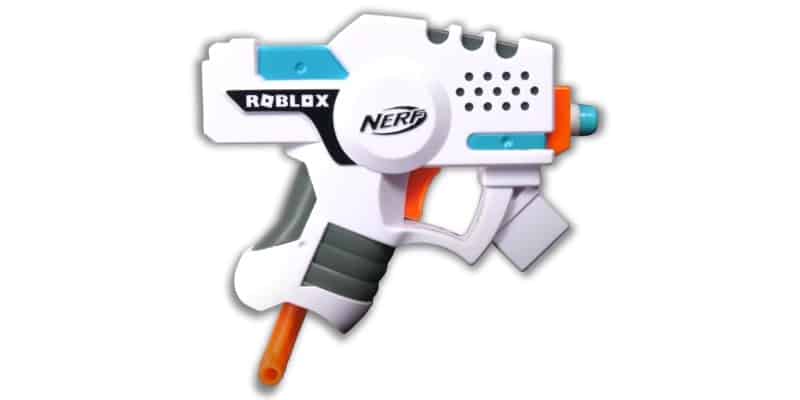 The Nerf Roblox Strucid won’t knock your socks off with its performance, but it’s a great choice for kids.

This blaster is based on a weapon in the popular kids’ game Roblox.

Included with its purchase are two sky blue and white darts and an unlockable item code for those playing the video game.

It fires at around the same speed as the other guns on this list, 60 FPS, which is softer than the average Nerf gun.

If you or the person you are shopping for loves the game, this is a good option for a real cheap Nerf Roblox blaster. 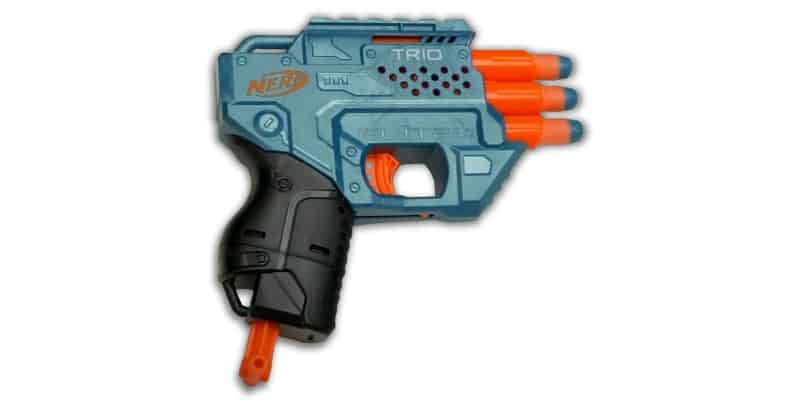 If you don’t mind spending a little more on a slightly better Nerf gun, check out the Nerf Elite 2.0 Trio!

For just a few dollars more, you can get this slim 3-shot blaster with a tactical rail on top.

You can get wild and throw a scope or another attachment on this sleek Nerf pistol.

The Trio is primed and loaded similarly to the other blasters on this list, with three times the firepower before needing to reload.

It is a little bit larger, but the slim design will fit right into your pocket and is perfect for a Nerf concealed carry!

I believe everyone can have a little fun with a Nerf gun, but many aren’t looking for a high-paced foam-slinging battle.

These little Nerf guns make for perfect stocking stuffers or a quick and cheap birthday gift.

If you are shopping for a child, these are some of the better options as they are small and shoot a little softer than average.

The Nerf age recommendations for all these Nerf guns are still 8+ years old.

With prices on so many things rising, who knows how long there will be $5 Nerf guns around.