The unveiling of the Nerf Mega series brought much more size and some extra power to the foam-flinging game.

Mega Nerf blasters have a few characteristics that set them apart from other types of blasters.

In this guide, we will look at the eight best Nerf Mega blasters you can buy. We will also cover the details of each gun, including the pros and cons of each.

The Mega Mastodon is the best Mega Nerf gun because it has a 24 darts capacity and is fully-automatic. It is a large Mega blaster that shoots about three darts per second with a velocity of 80 FPS. 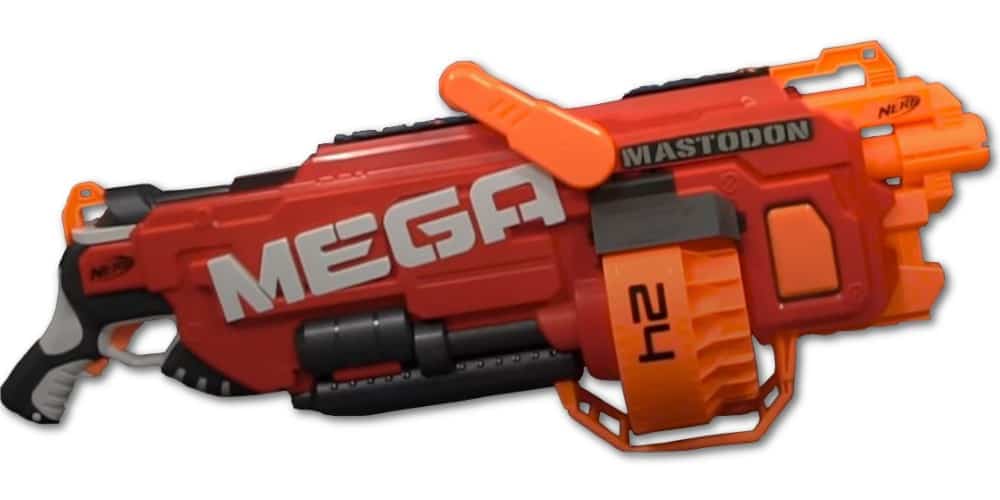 The Nerf N-Strike Mega Mastodon is an automatic flywheel blaster and the largest of the series!

The Mastadon is one of the biggest Nerf guns you can buy and features a twenty-four dart capacity drum.

You will definitely put the front and rear sling mounts as two hands are needed to use with this heavy weapon!

There are two separate tactical rails on top and another under the barrel for attachments.

The 6 D Type batteries required are installed on the left side of the blaster, and not included with the purchase.

It flings foam at 80 FPS and has an impressive fire rate of 3-4 darts per second.

The range you can expect is 40-55 feet straight, and up to 90 feet when given an angle.

Who Should Buy the Mega Mastodon

Everyone can have fun with this blaster, but it is kind of heavy for younger kids. This would be perfect for a parent to have to put their mark on a Nerf war.

The runner-up is the Nerf N-Strike Mega Megalodon, and is basically the Mastodon’s little non-automatic brother.

The Megalodon is a spring-powered blaster that is primed with the top carrying handle. The handle offers a different style of priming that is smooth and complemented by comfortable ergonomics.

Catching the eye right away is the impressive 20-dart drum that rotates with each pullback. It is easy to front load and comes with enough darts to fill it up.

There are two iron sights on top, though they are not real useful due to the way the gun is designed to be held. The gun also features three sling mounts: above the barrel, above the trigger, and below the grip.

The Mega Megalodon launches darts at up to 60 FPS, which is about average for the Mega series. It also can have a pretty solid fire rate with slam fire.

Typically you can expect ranges of 40-50 feet shooting straight, with a max of around 65 feet when angled up.

Who Should Buy the Mega Megalodon

The Megalodon is the best choice for a real Mega Nerf war. It is fairly compact for the high-ammo capacity and can be fired fast.

The Nerf Mega Cycloneshock is basically the larger version of the Elite Strongarm.

The CycloneShock has an ammo capacity of six within its rotating cylinder drum design. This is great for a Mega blaster, as the Magnus has only a three-shot capacity.

This gun is primed at the top rear and has smooth ergonomics and operation. The six darts can be quickly frontloaded by turning the cylinder to get them all in.

If you want to get even bulkier with it, there is a tactical rail on top for something like a scope or light attachment.

The CycloneShock shoots Mega darts at around 65 FPS, with a max range of 85 feet. However, the average range is about 40-60 feet when shot normally.

Who Should Buy the Mega CycloneShock

If you like its style, this is a solid Nerf revolver with decent capacity for its size.

If you want a hefty blaster that demands respect, take a look at the Nerf Mega Twinshock!

Ten darts are included with this blaster to fill each of the ten barrels on the Twinshock. It features a two-stage trigger that allows the firing of one or two darts with each pump.

One full pull will launch two darts, while pulling the trigger just halfway first will let you fire one at a time.

You will fall in love with the Twinshock if you get a chance to prime it. It has a smooth prime with a super satisfying loading sound.

It launches darts at the Mega average of just over 70 FPS, and has slam fire to increase the rate of fire a bit.

The range to expect with this blaster is 45-65 feet normally, and up to 80 feet when given an angle.

Who Should Buy the Mega Twinshock

If you like the size of it, the Twinshock is one of the best Nerf Shotguns you can buy.

I have the Nerf Mega Magnus as the best pistol of the series because it feels more pistol-like than the CycloneShock.

The Magnus has an interesting three-round internal magazine that works quite well. It can be loaded just as fast as a front loader once you get the feel of it.

You can use the one tactical rail for a grip, most likely as it’s located under the barrel. This blaster also features a sling mount on the grip and an unjamming button on the left side.

I have this blaster as one of the top Nerf pistols because of its solid quality and smooth shooting.

This gun shoots at just over 70 FPS which is typical Mega speed and slightly harder than the average Nerf gun.

When shooting for max range, it will go about 80 feet with the barrel angled upwards. Otherwise, the typical range is around 50-60 ft.

Who Should Buy The Mega Magnus

This blaster is perfect for those looking for a more compact Mega blaster. If you are considering buying this gun, check out our detailed review of the Nerf Mega Magnus for more helpful info. 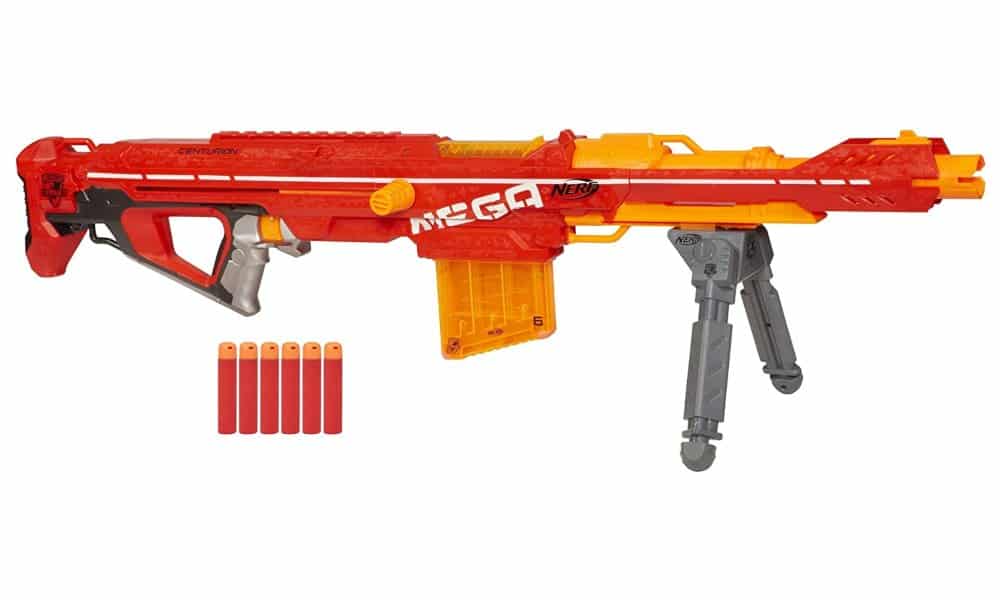 When the Nerf Mega Centurion was announced, there was a buzz of excitement and anticipation. Did it live up to the hype?

The Centurion is on our list of the best Nerf snipers, but mostly because there aren’t a ton of snipers out there. Let’s just say, most Nerf enthusiasts expected more from the Centurion than they got.

Looking at the good first, this blaster has a sweet look and great operating sounds. It includes a 6-dart magazine and is primed to fire bolt action style.

The bipod is great quality with height adjustment options and is removable. There are also three sling mount points to possibly help you bear the load of the gun.

One of the main things that baffles buyers is that this sniper doesn’t come with a scope. A tactical rail up top allows you to throw one on if you have it, but why not include one?

Nerf snipers always are disappointing because you expect them not to have the standard performance. The Centurion shoots okay for the size of ammo, firing darts at about 70 FPS.

The performance of any Nerf gun is rarely consistent, and the range of the Centurion fluctuates quite a bit. In good conditions and with the gun at a bit of an upward angle, you can get a max range around 90 feet.

Who Should Buy The Mega Centurion

This blaster won’t impress with performance, so it is best for collectors or just role-playing as a sniper. It feels good, looks good, and sounds good.

The Fortnite Heavy SR is a newer Mega sniper that has a very unique design resembling a gun from the video game.

Let’s start with the upper tactical rail that comes with a decent scope attached. This scope has crosshairs, non-magnifying lenses, and is removable. There is also another rail that is at an angle just in front and below the scope.

Like the Centurion, this sniper features an external 6-round magazine that, of course, uses Mega darts. This magazine is released with a release trigger in the same area as the firing trigger.

The bipod is the other notable feature; it is a bit flexible and good quality but not removable.

At 43 inches long, you would hope for a better performance out of a big blaster like this. As with most other Nerf sniper guns, this one feels like it should shoot harder and farther.

It has an average shooting speed of about 65 FPS, which isn’t all that bad if you consider the ammo size.

You should expect standard range performance while using the Heavy SR with a max of about 80 ft. Though it is large, it is definitely not a high-performance Nerf blaster with exceptional power.

Who Should Buy the Fortnite Heavy SR

The Heavy SR is great if you like Fortnite or the generally cool aesthetics of this massive sniper. If you do enjoy the game it is based on, be sure to check out our top picks for Fortnite Nerf blasters.

The Nerf Mega Motostryke is one of the only automatic magazine-fed blasters shooting Mega darts.

This automatic blaster comes with a ten-dart magazine and requires 4 C Type batteries that are not included.

To fire this gun, you load the magazine in and use the rev trigger to get the motor going. You can then pull the normal trigger to launch darts one at a time.

The fixed attachments included a compact stock in the rear and a grip below the barrel. This blaster also features two sling mounts, and a tactical rail above that doubles as a carrying handle.

I have the Motostryke as a wild card because it has mixed reviews.

The trigger can have the issue of slowly going back into place after firing. This slows down the firing significantly as you have to manually push the trigger or wait for it.

With that said, it is hard to pin down the rate of fire. The Motostryke slings its ammo at 70 FPS.

Who Should Buy The Mega Motostryke

The Motostryke is a big auto Mega blaster at a fair price. If you want an automatic Mega gun and aren’t worried about having a fast fire rate, this is a decent choice.

The Mega series is a fun line of blasters that can make size an element of fun without reducing the performance.

It is true that the new Mega XL series has taken some of the novelty of Mega away with the much larger Mega XL darts. However, while Mega XL is super fun to shoot, the blasters shoot a good amount softer than Mega.

Mega was not made for high performance, but it brought another fun element to Nerf battles. The other nice thing about this series is that they bring some guns that have a large ammo capacity.

Overall, the Mega line is one of my favorites and can be a lot of fun to get into.