It is hard to beat the feel of slinging foam with a Nerf revolver that can be operated entirely with one hand. That is unless you have one in each hand going ham like you are in an old west shootout.

While there aren’t a ton of real Nerf revolvers, we sorted through them all to bring you the best ones you can get in 2022.

If you want to save some time reading and get straight to the best of the best, here is number one on our list!

The best Nerf revolver is the Nerf Elite 2.0 Trailblazer RD-8 because of its 8-dart capacity and smooth one-handed operation. It has a fancy color design and offers a solid revolver-style feel. It also includes 16 color-matching darts with the purchase.

If the Trailblazer isn’t what you are looking for, there are more revolvers on this list sorted by why they are one of the best options.

Released in 2022, the Nerf Elite 2.0 Trailblazer RD-8 has brought us an upgraded version of the Nerf revolver design.

The Hammershot will always hold a special place in the hearts of Nerf lovers, but the Trailblazer has an 8-dart capacity. It also comes with 16 darts which adds some solid value.

The Nerf Trailblazer has the standard pistol performance but does have an average 70 FPS dart velocity.

Some people may find reloading revolvers a bit of a pain, but this one is pretty quick. The left side of the rotating drum is exposed to make it much faster to squeeze in those darts.

I do wish they had a sling mount on this blaster, and that the tactical rail was on the top. I just feel a scope is a better attachment option than a grip.

They dubbed this pretty color scheme the “Wild Edition,” so fingers crossed we get some more sweet versions of this blaster in the future.

Once you feel and fire this Nerf gun, you can instantly tell why it’s one of the top 10 best Nerf pistols. With the single-hand operation and eight darts to fire before reloading, this blaster is a great sidearm.

The Nerf Zombie Strike Hammershot is perfect for those who want to feel like a cowboy and slay zombies at the same time.

It gets its name from the hammer-action spring-powered design that launches darts at around 65 feet per second.

Included with this gun are five green Zombie Strike elite darts and instructions.

The most popular features of this blaster include the comfortable wood-painted grip and the ability to be fired one-handed.

You can hold one of these blasters in each of your hands and prime the guns with your thumbs to unload darts at two different targets. This is a big reason it’s one of the best Zombie Strike blasters.

The Hammershot also has a sling mount on the handle and a tactical rail on top for customization with additional attachments.

This blaster is popular, fair-priced, and just a must-have for all Nerf enthusiasts.

If you like the design of this one and want some more info on its performance, check out our detailed review of the Nerf Hammershot.

If you want a revolver that is easy to use and shoots hard, the Nerf Ultra 2 is sure to please.

This flywheel blaster holds six ultra darts and slings them up to 90 feet per second, which is well above the Nerf elite average of 70.

Not included are the 6 AA batteries needed to power the gun, but they are easy to install in the battery tray on the side.

The Ultra 2 can be operated with one hand but is slightly heavy with the batteries installed. This feature also makes this gun an excellent option for capture the flag Nerf game modes where having a free hand is necessary.

You shoot the gun by using the rev trigger on the handle, then firing with the main trigger.

A tactical rail on top and bottom of the barrel leaves room for accessories and customization.

One of my only complaints with Nerf Ultra blasters is that they will often shoot a dart wildly in a while with inconsistent accuracy.

Ultra darts are advertised as more aerodynamic and accurate, but they aren’t really that much better than regular darts.

Overall the Ultra 2’s revolver design feels slick, and not having to prime the gun makes this a lot of fun. 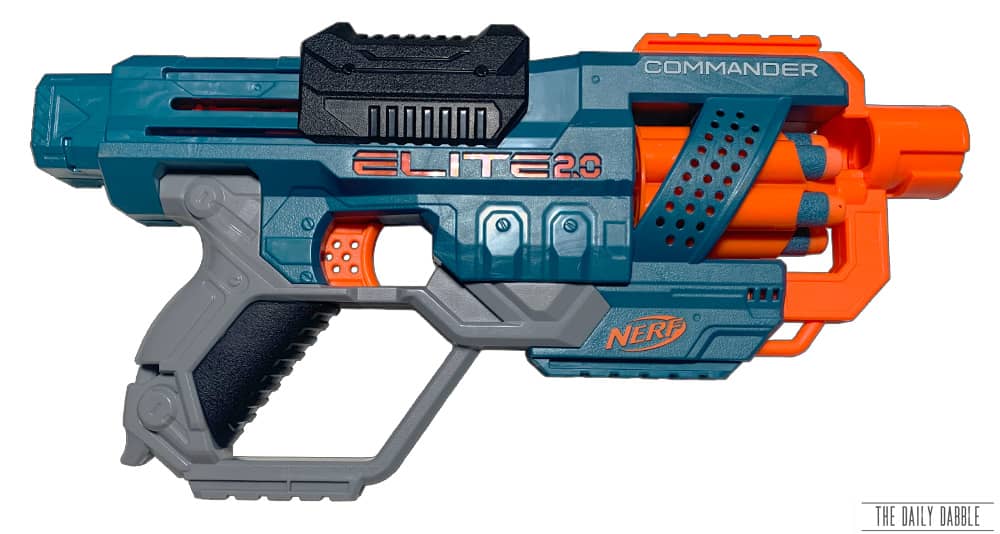 The Nerf Elite 2.0 Commander Rd-6 was made for those who like to have options. This bad boy has three tactical rails, room for a stock attachment, and an N-strike barrel lug.

Even more impressive is that it is still the least expensive gun on the list with all that design.

This gun is a part of the Elite 2.0 series first released in 2020. It is named Commander because it was the initial gun released in the series and can be transformed drastically with additional attachments.

The RD-6, standing for the rotating drum(6-shot), is a six-shooter with a fixed front loading cylinder. It shoots at an average of 70-75 feet per second and the black handle on top primes each shot.

With the gun comes 12 elite darts which is enough to fill the gun twice. This gun also has slam-fire so that you can hold the trigger and rapidly pump the handle to fire faster.

On a side note, you may have trouble priming the handle if you put a big scope on top because of where the priming handle is.

One issue with this blaster is loading the gun can be a bit slow because you have to manually rotate the barrel to get all the darts in.

Overall the Commander offers the most bang for your buck if you already have some attachments you can use with it. It may not look like a traditional revolver, but it is an excellent example of a new take on the design.

Check out the hands-on review of the Nerf Commander for more details about this gun. 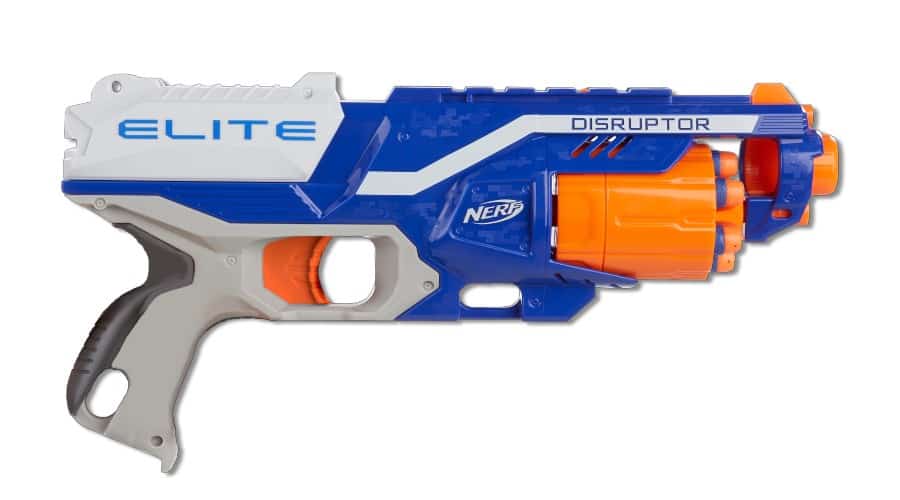 The Nerf Elite Disruptor is a sleek, easy to reload, and smooth-firing classic revolver.

The Disruptor is an updated version of the Nerf Elite Strongarm. The main difference between the two is that Strongarm has a pop-out cylinder for reloading while the Disruptors’ is open-ended and fixed.

Its cylinder holds six darts which it fires at 70 feet per second. The velocity is average, but it does have slam-fire so you can get the darts off quick.

Some front-loading cylinders are partially blocked or slow to reload, but this one is quick and easy.

While there isn’t much room for customization, this blaster includes a tactical rail on top and two strap points for lanyards or slings.

You can find this gun in a few other color designs, but the translucent red version is one of the coolest I’ve seen.

The Disruptor is another great basic Nerf blaster that does what you want it to without breaking the bank.

The Nerf Fortnite 6-SH has the look and feel of an old western revolver minus the weight. If you ignore the big whacky barrel, it looks the most like a true revolver.

It is based on the six-shooter from the Fortnite video game, and that’s where it gets its name.

One nice thing about Fortnite Nerf blasters is that even though they can look oversized, they are actually lightweight.

That means the 6-SH can easily be dual-wielded because the hammer-action prime handle also allows it to be operated one-handed.

The average dart velocity this blaster shoots is around 65 feet per second, which is just under the average par of 70.

The barrel comes detached when you open the package, but once it is clicked into place, it can’t be removed.

You can try to fan the hammer and shoot, but its performance goes way down when you do.

Overall, this is a good revolver option because of its looks and ease of use.

The Nerf Mega CycloneShock is a larger Mega darts shooting version of the Strongarm and Distruptor.

A six-shot capacity and smooth firing system make this blaster one of the best Mega Nerf guns. It is a spring-powered front loader that feels really good in the hand.

It shoots the Nerf average velocity of about 65 FPS when launching Mega darts. You can expect average ranges but relatively consistent performance.

The only tactical feature is the rail on top that could sport a scope if you feel the need to attach one. Unfortunately, this blaster does not have the slam fire feature.

The CycloneShock is a great choice if you want a revolver that shoots Mega ammo.

The Nerf Overwatch Mcree blaster is a single-shot spring-powered blaster based on the gun Peacekeeper from the video game.

If you prefer rival round blasters and like the revolver style, this one is different but enjoyable.

You prime the blaster by pulling back on the top front portion of the barrel, opening up the cylinder where you can load one rival round.

The catch is that the cylinder doesn’t revolve as it doesn’t need to with only one shot.

The Overwatch Mcree blaster fires rival rounds just above 70 FPS, which is average for Nerf but lower than most Rival blasters.

Some people like the feeling of loading one shot at a time, while others view it as a big con. I just wish this blaster shot at a higher FPS to make the single-shot worthwhile.

This blaster makes the list mostly on looks but is entertaining to operate and shoots smoothly.

The Magpie by frontline foam is a custom 3D printed half-length dart-shooting revolver.

The main reason one would pay the higher price for this gun is the customization options and the extremely high FPS.

When picking the color scheme, you can choose a primary, secondary, and grip color. For each of these choices, there are over 20 different colors from which to choose.

You will want to wear safety gear when firing this one because it packs a punch.

The Magpie launches half-length darts at a velocity of 120 feet per second, which makes it one of the hardest-shooting Nerf guns.

Reloading can be quick and easy as you can get additional cylinders that can be swapped fast if you pre-load them with darts.

Besides the price, the main con of this gun is that you will have to buy a battery, darts, and a charger separately if you don’t have those.

Let’s be honest; this is the definition of a splurge if you want to go a little more extreme than the average Nerf revolver. It is also made one of the Nerf alternative brands that isn’t yet as reputable. 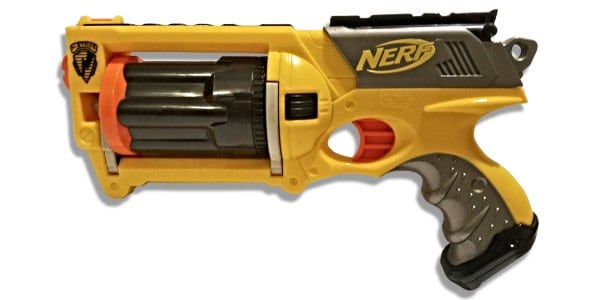 It wouldn’t be a proper Nerf revolver list without mentioning the Maverick REV-6. It is the original Nerf revolver that paved the way for many of the popular revolvers on this list.

The Maverick was released in 2005 and included 6 Micro darts (the suction cup darts).

It would definitely be on the list if it wasn’t discontinued and is now hard to find. If you can find it on auction sites, you will likely pay 3-4 times its original price to get your hands on it.

The Maverick was made even more iconic by YouTuber and engineer Mark Rober who made the world’s largest Nerf gun based on this gun in 2016.

The current gun most closely resembling the Maverick is the Strongarm, which has a cylinder that pops out a bit more when reloading.

While the FPS and velocity didn’t make the Maverick REV-6 stand out by any means, it will always hold its place as an OG Nerf gun worth remembering.

I hope you enjoyed our list of the seven best Nerf revolvers in 2022. This list did not include those that have been discontinued and are now hard to find.

Our list will continue to be updated as more blasters like this are released in the future.