There was once a time when Nerf wars were gentle—a friendly dispute of slow and soft foam.

Those days are over; a new age has dawned.

Like a mighty lightning bolt being hurled from the heavens, Nerf Rival Rounds descended into this world as a gift from God to spread his good word. “Thy shall feel his foamy wrath!”

In this guide, we’re going to take a closer look at Nerf’s High-Impact Rival Rounds.

Buckle up, and let’s get to it!

What Are Nerf Rival Rounds?

Introduced in 2015 as a part of Nerf’s new Rival Series, the High-Impact Rival Round is a ball-type projectile made of Nerf’s “high-impact foam.” This newly designed ammo is fast and one of the most accurate foam bullets to date!

Rival rounds are much denser than traditional foam darts but still squishy enough to be used safely around the house—although they tend to bounce everywhere.

They also pack more of a punch compared to regular darts, which is partly due to the fact that Nerf Rival blasters tend to shoot at higher velocities—most shooting between 90 and 120 FPS.

But this begs the question, do Rival balls hurt?

Not really. From experience, they’re about twice as painful as traditional darts. You’ll definitely know when you get hit, and from most people, you’ll hear an “ouch,” but they won’t leave a bruise, and the discomfort dissipates almost instantly.

Why Do Nerf Rival Balls have Dimples?

Nerf rival balls have a porous surface, similar to a golf ball. These pores create turbulent air around the ball, which reduced reduces drag and overall air resistance.

In a nutshell, these pores make the balls faster and more accurate.

Overall, it’s really cool to see such a simple technology be used in foam warfare.

Fun Fact: The dimples on a golf ball allow it to travel almost twice as far as a golf ball with a smooth surface.

The main characteristics of Rival ammunition are: 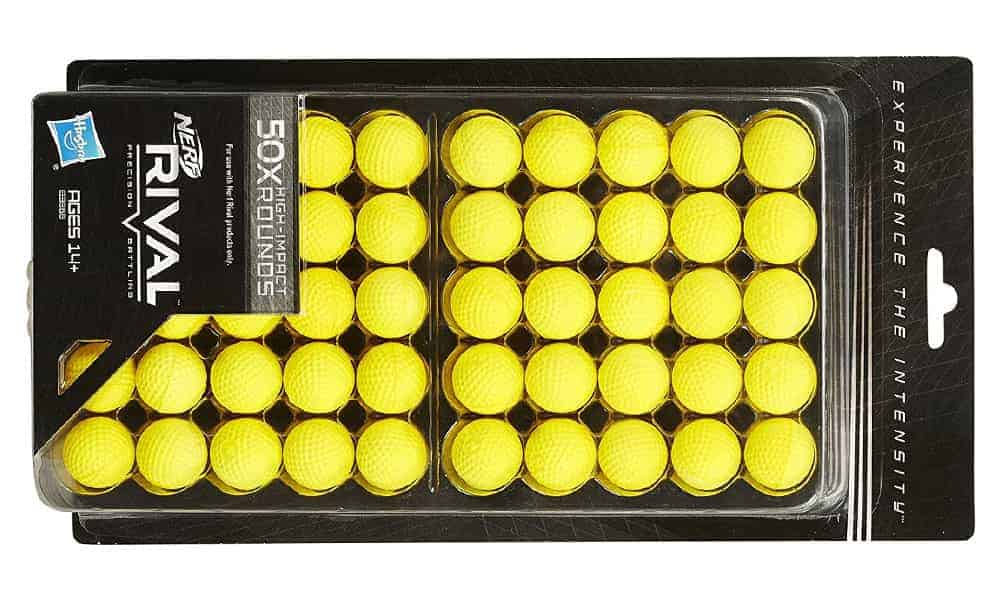 The Official Nerf Rival Ammo Refill Pack is a must-have for any Nerf War enthusiast. It includes 50 high-impact rounds made of high-impact foam and are designed for use with Nerf’s Rival blasters.

While a little more expensive than off-brand refill packs, they truly are the best in terms of quality control—which will give you better accuracy and overall shot placement.

Nerf also has several other colors and themed rounds—you can find that list at the bottom of this guide (or click here).

I highly recommend this product to anyone looking to add some excitement to their next Nerf War!
CHECK AMAZON PRICE 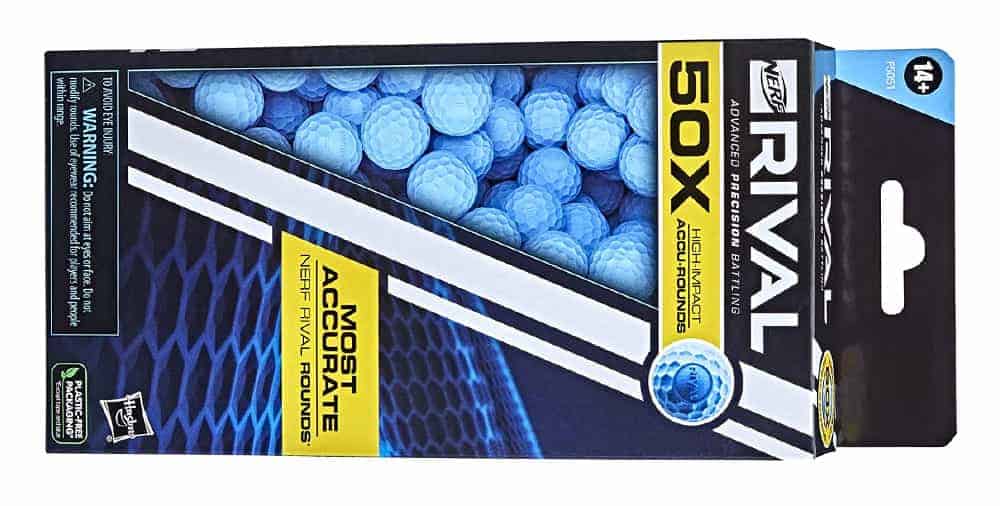 The Official Nerf Accu-Round Refill Pack is another must-have for any Nerf War enthusiast.

It includes 50 Accu-Rounds made of high-impact foam and are designed for use with Nerf’s Rival blasters. I highly recommend this product to anyone looking to add some excitement to their next Nerf War!

These rounds are even more accurate and consistent than standard Rival Rounds, making them perfect for maximum impact in any Nerf battle.

They have an upgraded aerodynamic design and dimple pattern that provides a more stable flight pattern. If you’re looking to take your game to the next level, then you need to check out these rounds!
CHECK AMAZON PRICE 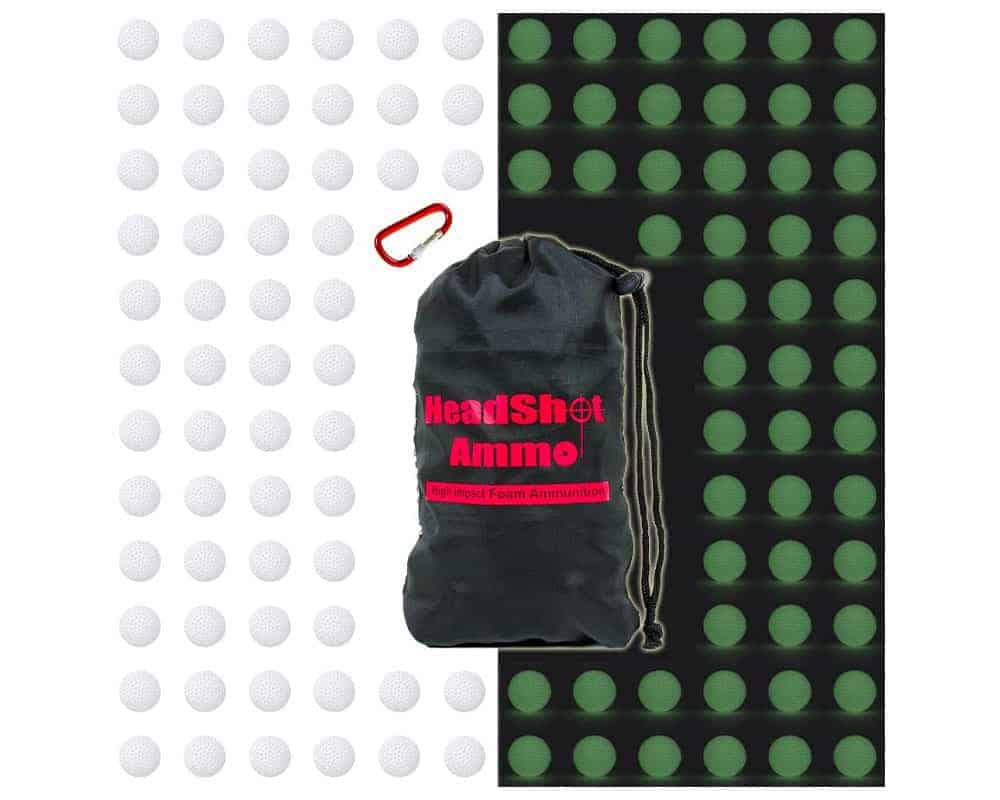 This pack includes 110 rounds and comes in a variety of colors, including red, blue, yellow, orange, and hot pink. They even have rounds that glow in the dark!

While the official Nerf Rival rounds have better quality control and perform slightly better, these rounds fly true and are really accurate.

So if you’re looking for stock ammo to keep your blaster firing on all cylinders, then this is definitely the refill pack for you.
CHECK AMAZON PRICE 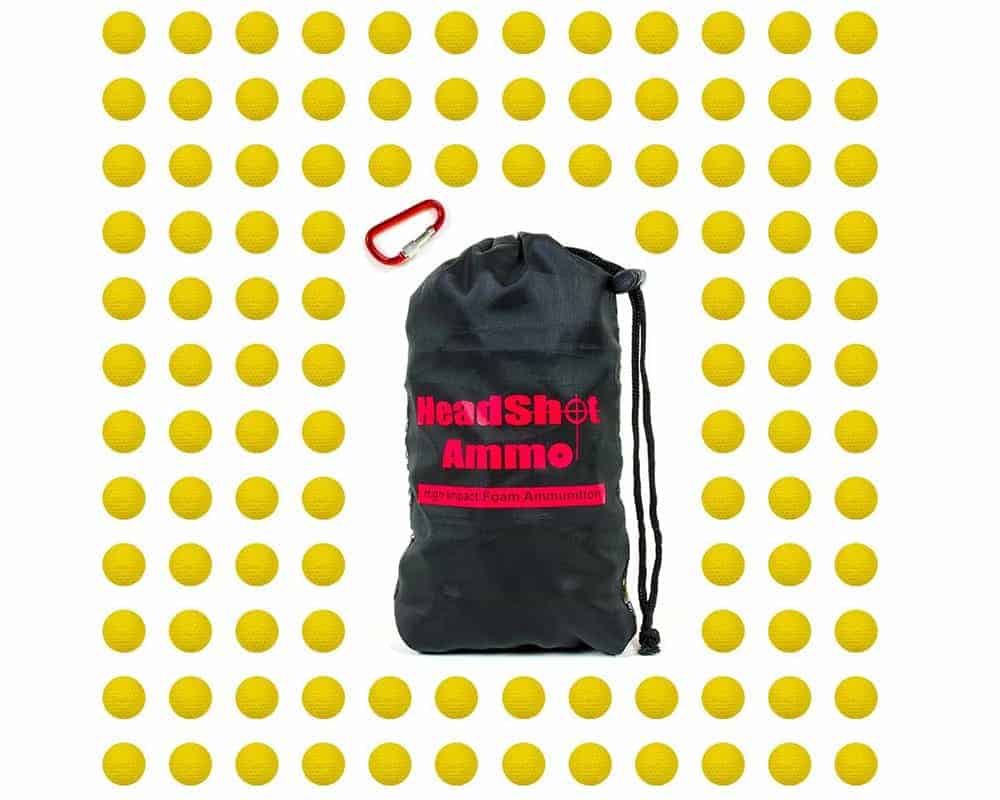 What if you never had to worry about ammo again? What if you could spray lines of foam so long that your enemies eventually soil themselves while waiting for you to run out of ammo?

With the HeadShot Ammo 1000 pack, you can do just that!

This pack comes with an insane 1000 rounds and comes in a variety of colors, including red, blue, yellow, orange, and hot pink. You can even buy 1000 rounds in their glow-in-the-dark version!

While the official Nerf rounds have better quality control and perform slightly better, these rounds perform very good and is a great value for your money.

So if you’re looking to stock up on some ammo for your next Nerf War, then be sure to check out the HeadShot 1000 pack!
CHECK AMAZON PRICE 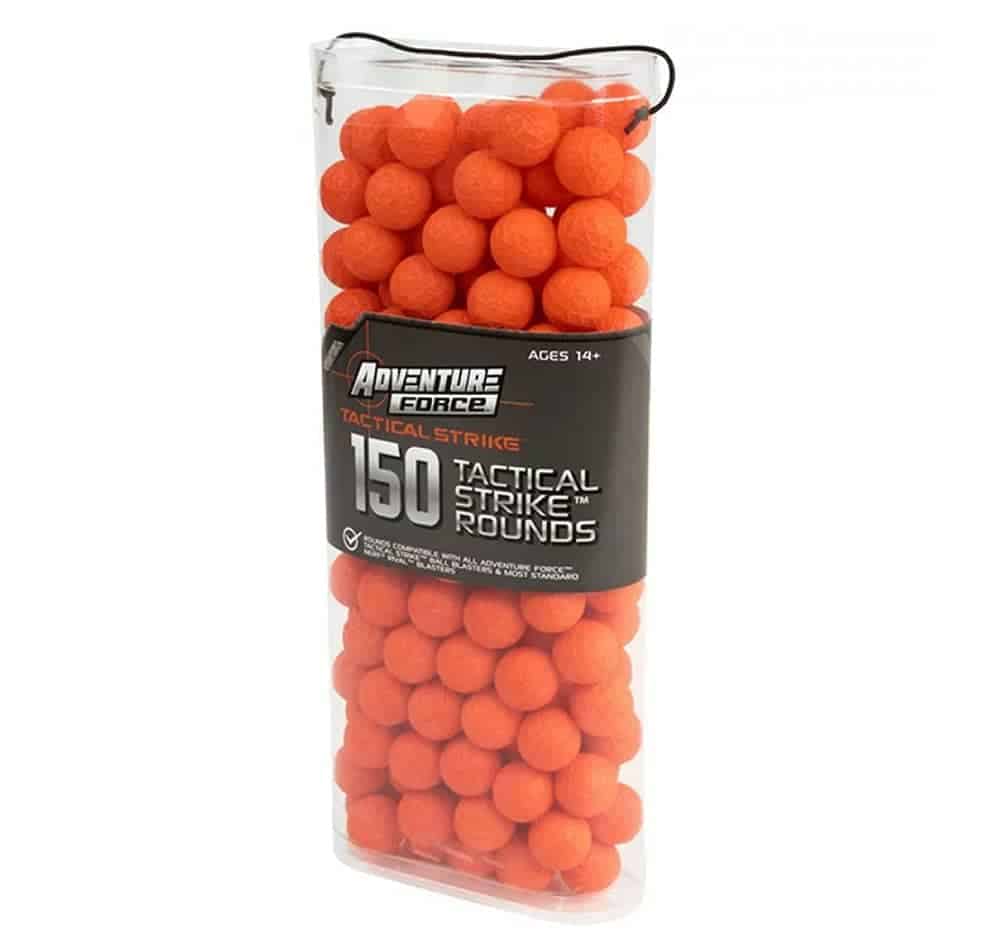 Adventure Force is known for their high-quality and powerful nerf guns, and I was thrilled when I saw they released a knock-off Rival Round.

I didn’t know what to expect when I ordered Rival balls from a Nerf alternative brand, but I wasn’t disappointed.

These rounds are on par with the original Nerf Rival rounds but cost much less. They fly true and pack a punch!

The only downside is that they’re only available in orange and can only be bought at Walmart.
CHECK WALMART PRICE

Over the years, Nerf has released various versions of the Rival rounds. With the exception of the Accu-rounds, the only difference between each is the color.

Rivals rounds inflict about twice the pain as traditional Nerf darts for two reasons. Firstly they are much denser material than darts, so the impact carries a little more heft to it. Secondly, they are ammo for Rival series blasters, which shoot at much higher velocities—-some reaching up to 120 feet per second!

What Are Rival Balls Made Of?

Rival balls are made of Nerf’s “high-impact foam.” This is a new type of material designed specifically for the Rival line that is denser than traditional Nerf darts but still squishy enough to be used safely around the house.

Why Do Rival Balls Have Dimples?

The dimples on Rival balls serve the same purpose as they do on golf balls. They create turbulent air around the ball, which reduces drag and overall air resistance. This makes the balls faster and more accurate.

Rival rounds are much denser than traditional Nerf darts. This gives them a couple of advantages. Firstly, they pack a bit more of a punch. Secondly, because of the increased density, they are less likely to be affected by wind gusts and other factors that can throw off your shot.

Can I Use Off-Brand Foam Rounds With My Nerf Rival Blasters?

Yes, you can use off-brand rounds with your Nerf Rival blasters. However, you may notice a decrease in performance with some off-brand products—such as feeding issues on hopper-fed blasters like the Prometheus. This is because Nerf engineered their Rival blasters to work best with their own brand of ammo.

Are Rival Rounds More Accurate than Other Nerf Darts?

Rival rounds are much more accurate than traditional Nerf darts. They are designed with a golf ball-like surface that creates turbulent air around the ball, reducing drag and overall air resistance. This makes the balls faster and more accurate.

Where Can I Buy Nerf Rival Ammo in Bulk?

You can buy Nerf Rival Ammo in bulk from a few different places. my favorite place to buy is Headshot Ammo, which is a great alternative to Nerfs more expensive refill packs. They have a variety of colors and even rounds that glow in the dark! You can find a variety of refill packs such as their 110 pack, 500 pack, or even their 1000 ball pack.

Nerf Rival Rounds have definitely changed the way we play and have created a more intense style of nerfing. Though they may be seen as controversial by some, they offer an experience that is unmatched.

Whether you’re a fan of the rounds or not, it’s hard to deny that they’ve made quite the impact on the Nerfing community!

Thanks for reading, and happy Nerfing!