Can You Eat a Goldfish?

So you want to know if you can eat a goldfish?

I won't ask why you're asking, and you don't have to tell me. But I will answer your question.

The Goldfish is an edible freshwater fish native to East Asia and is a member of the carp family. Carp were bred as food in East Asia for thousands of years, goldfish being among them. However, pet goldfish do carry parasites and mycobacterias that can cause disease among humans. Some of which, like capillariasis and sepsis, can potentially be fatal.

Now, if that answer wasn't in-depth enough for you, fear not! I wrote an entire collection below answering all of the most crucial goldfish eating questions.

I fell down the goldfish-eating rabbit hole with this one and...well...buckle up cause this one is weird.

Notice: No little fishies were hurt in the writing of this article.
Other Great "Can You Eat It?" Guides:

What Happens if You Eat a Goldfish?

Let's say one Friday afternoon you decide to harvest your freshly cultivated mushrooms; however, you quickly discover they aren't your average mushrooms, but instead a little more magical. During your "adventure," you decide to eat your goldfish.

Stranger things have occurred, I'm sure, but the question begs to be answered, what happens if you eat a goldfish?

While goldfish are edible, humans should avoid eating them. Even when goldfish appear healthy, they are commonly affected by parasites and mycobacterias that are transmittable and sometimes dangerous to humans. One of the main types of bacteria that cause Fish-Handler's disease is Mycobacterium which is very common among goldfish.

In short, there are risks, but you'll likely be just fine. However, let's expand slightly more on what happens when humans eat goldfish.

Common symptoms of C. philippinensis are diarrhea, fatigue, and abdominal pain, and in rare cases, can be fatal.

Cooking your goldfish is the best way to avoid capillariasis but may not fully kill other parasitic infections.

Goldfish also carry mycobacterial diseases– regardless if they are raw or cooked. Some of these mycobacteria can be transmitted to humans and cause ailments such as Fish Handler's disease.

Common symptoms for Fish-Handlers disease caused by mycobacterium are skin lesions, joint pain, tendonitis, and in rare cases, sepsis (which can be life-threatening.)

Even if your goldfish appears healthy, it may still suffer from one of these conditions and could pass it on to you.

It's better to just leave the fish in its bowl.

Eating goldfish was popularized in the late 1930s in American colleges. It later exploded into a fad that has never truly died.

You can find hundreds of YouTube videos online of people eating goldfish.

Beyond attention-seekers, most people do not eat goldfish. They are tiny fish that are hard to clean and cook, taste bad, and provide little nutritional value. There are also health risks associated with eating goldfish that most find not worth the risk.

There is no real reason to do it besides being cruel to the fish. Imagine for a moment being thrown into a pool of acid and that you could do nothing but roll around in that acid until it devoured you alive.

Probably a pretty painful experience for anyone, including a fish.

Can Eating a Goldfish Kill You?

If you're looking at your goldfish and licking your chops, the first question that's probably going through your mind is, will eating a goldfish kill you?

In most cases, eating a goldfish will not kill you. However, goldfish do carry parasites and mycobacterial diseases such as capillariasis and sepsis that, when consumed, can be fatal.

So while it is rare, eating a goldfish can cause other life-threatening diseases and kill you.

Again, just leave the goldfish in its bowl.

Can You Cook Goldfish?

What if you are hungry but not that hungry, and your little goldfish seem about the perfect size for a meal? But you don't want to eat it raw.

Can you cook a goldfish?

A goldfish is a small variation of a carp and, like any carp, can be cleaned, cooked, and eaten. If you do eat a goldfish, cooking it is a good idea as it can reduce your chance of disease.

However, even though you can cook a goldfish, it doesn't mean that it will be easy. Unless you want to eat it whole, cleaning and deboning a goldfish is a task even a skilled surgeon would find difficult.

And truth be told, you would get more meat from a chicken nugget. More nutrition too!

One thing that we can all likely agree on is that real goldfish probably don't taste like cheezy crackers. If they did, I think we'd all be in trouble.

I've never personally eaten a goldfish, so I had to reach out to the darkest parts of the internet to find out. This is what I found.

Goldfish are tiny carp that typically have a smooth texture and a light "non-fishy" taste. Because most goldfish are fed flakes or pellets, they will likely have a dominant flavor representing fish food. 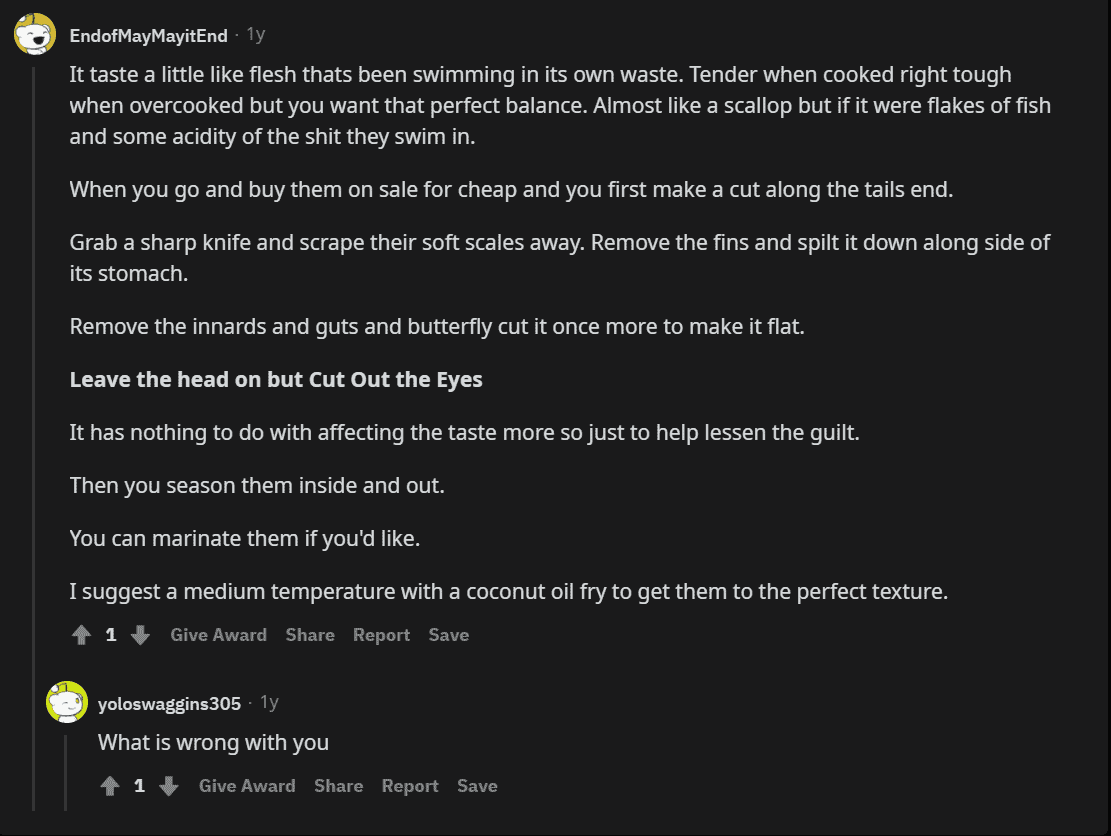 Is It Illegal to Eat Goldfish?

In most parts of the world, it is not illegal to eat goldfish. However, in the UK you can be arrested and fined if caught in the act of consuming goldfish.

He was later arrested, fined £200, and was banned from owning a pet for three years.

Is It Safe to Swallow a Live Goldfish?

Let's say your too lazy one night to clean and cook your goldfish, and you just want to eat it sushi-style!

Is it safe to swallow a whole and alive goldfish?

Goldfish are fairly safe to swallow. While they do pose a slight choking hazard, most goldfish are small enough to eat with ease.

I assume the scales don't feel too great going down, nor up for that matter.

Taking that observation further, I bet a little tail slapping the inside of your throat on the way down feels weird as well.

Can You Feel a Goldfish in Your Stomach?

The human stomach is a pretty terrible place for a goldfish—or any living creature for that matter.

But if you ate a goldfish, would you be able to feel it in your stomach?

Thanks to Steve-O and an episode of a jackass where he ate and vomited a live goldfish, science now knows that goldfish do not die immediately when consumed.

Also, if you have ever seen how a fish acts when it is not happy—like when left out of water— you know they flip and flop a lot.

With these two observations, I can only conclude that you could feel a goldfish in your stomach.

Can You Eat Pond Goldfish?

Throughout this post, we've established that eating tiny goldfish is not a good idea and could pose health risks.

But what about those bigger goldfish that live in ponds? Can we eat those?

Pond goldfish are edible and are related to carp. Carp have been bred and consumed in Asia for thousands of years. However, depending on the conditions in which pond goldfish are raised and fed, there can be associated risks with eating them.

They may be big enough to clean, cook, and provide a decent meal, but unless it is your only option, perhaps consider leaving the bigger goldfish alone.