Whether it was for the shock factor or maybe just due to pure boredom in the classroom, you likely know someone that chose to eat glue.

Even though they possibly turned out "fine," you may still have wondered if you can eat glue or what the side effects would be if you do.

It is best never to eat any type of glue, even if it is labeled non-toxic. Other than some designed for the food industry, most glues are not edible and provide no nutritional value.

Glue should not be consumed or used in any other way than intended for as an adhesive.

It is important to know what the terms non-toxic, edible, and food-safe mean.

There are many non-toxic types of glue, but that doesn't mean it is ok to eat them or breathe in their fumes. The more toxic glues, the industrial-strength kind like super glue, are more cause for concern.

Non-toxic means it doesn't have poisonous chemicals that will cause you physical harm.

The term edible refers to the ability to digest something.

Food-safe means that it will not cause issues or reactions if it comes in contact with food. This term does not really imply that it is entirely safe to eat.

So while some glues are non-toxic, they are still not edible and can still cause you harm in other ways when too much is consumed.

Other Great "Can You Eat It?" Guides:

What Happens if You Eat Glue?

Luckily most of the glue that is eaten or tasted is non-toxic household stuff like Elmer's and not the stronger more industrial types.

Eating a little bit of non-toxic glue will usually cause no ill effects. However, if you eat enough household glue or even a small amount of industrial-strength glue, it can cause serious health issues.

It should be obvious that eating strong glues can cause major issues in your mouth as well as within your digestive system.

Here are some basic side-effects that can come with eating glue:

This is why it is better to not eat glue at all and why preventing kids from doing so is also suggested.

That being said, there is generally no need to panic if some non-toxic glue has been eaten.

What is Glue Made of?

We have all heard the jokes or comments about glue being made from horses and other animals, but is that still true?

Glue made from collagen harvested from animals is generally a thing of the past. Most glue these days is derived from petroleum or natural raw materials. Common glues like Elmer's or Gorilla Glue are not made from animals and have synthetic and natural ingredients.

While glue has been made from horses before, it is seldom the case now as they are just not as prevalent as they used to be, and there are better options now.

Animals have been used to make glue for thousands of years, but it is now more efficient and often cheaper to create and use synthetic glues.

The main ingredient in animal-based glue is collagen.

Collagen is a critical building block for bones, muscles, ligaments, tendons, and even skin for both humans and animals.

All those body parts mentioned will release collagen when boiled and broken down.

When glue is made from animals these days, it is primarily sourced from the leftover parts of cattle and pigs after all their usable meat is harvested.

As stated previously, most glues used today are synthetically created without the use of animal parts.

Most synthetic glues are made from some combination of a few ingredients: polyvinyl acetate (PVA), ethanol, acetone, and water.

While these are the most common ingredients found in glue today, additional additives are used to increase the shelf life of the products.

Finding the exact recipe for a certain brand of glue can be difficult because that is often valuable proprietary information that can be crucial to their business.

Can You Eat Elmer's Glue?

I think it is pretty safe to say that Elmer's glue is one of the most consumed glues out there.

This is most likely because it is a trusted brand that kids and families have used for a long time.

Elmer's is non-toxic and generally safe but is not considered edible because it cannot be digested. Non-toxic glues can still make you sick and even cause digestive issues when enough is consumed.

As you may well know, people do eat it, and some do so in large quantities.

Even though it is not edible, most people will be fine eating a bit of non-toxic glue as it will just pass through the body without being digested.

It can be eaten, but it will do you no good other than if, for some reason, a person enjoys the taste or texture.

There have been people reported to eat bottles of this glue and still be fine, but is it really worth the risk?

Can You Eat Super Glue?

Super glue is a glue brand and a term used for a type of powerful glue containing cyanoacrylate.

Real super glue that contains cyanoacrylate, a toxic chemical,  is not edible or food safe. Eating super glue is way more dangerous than eating Elmer's glue because the bond that forms is stronger and often waterproof.

Super glue is unsafe to eat and is also more dangerous to handle in general because of its strong adhesive power.

You will not want to use super glue in any areas of your home that may come in contact with food.

Many high-strength types of glue are considered food-safe but still non-edible that are safer options to use around the home.

Since people are eating glue, they must be curious as to what it tastes like, right?

As glue was not designed to be eaten, it does not taste all that good. Glues can vary in flavors from burnt rubber to a more floral taste, and some can even have an inky taste.

If your stomach can handle it, here are some YouTubers named Rhett & Link who tried some glues to see which tastes best.

Remember that these guys are eating glue for entertainment purposes and it is still not advised to consume glue.

Why do People Eat Glue?

This is, to me, one of the most important questions to ask. Why do people eat glue?

People likely eat glue because it seems safe to do so or possibly just to get some attention. Kids are more likely to eat glue because they are bored or don't realize it can make them sick.

I mean, there is normal edible food that I will gladly risk getting sick from by eating it.

There is just nothing enticing enough about glue that would make me eat it and get a tummy ache.

What Does the Phrase "Eating Glue" mean?

As a side note to the question of whether eating glue is safe, you may have heard the phrase "eating glue" or "eating paste."

The phrase "eating glue" or "eating paste" generally refers to someone who is simple-minded or doing something stupid. This is because most people recognize eating glue as something that is not a smart thing to do.

It can also be used as a joke to refer to someone or something totally oblivious or who doesn't understand what is going on around them. 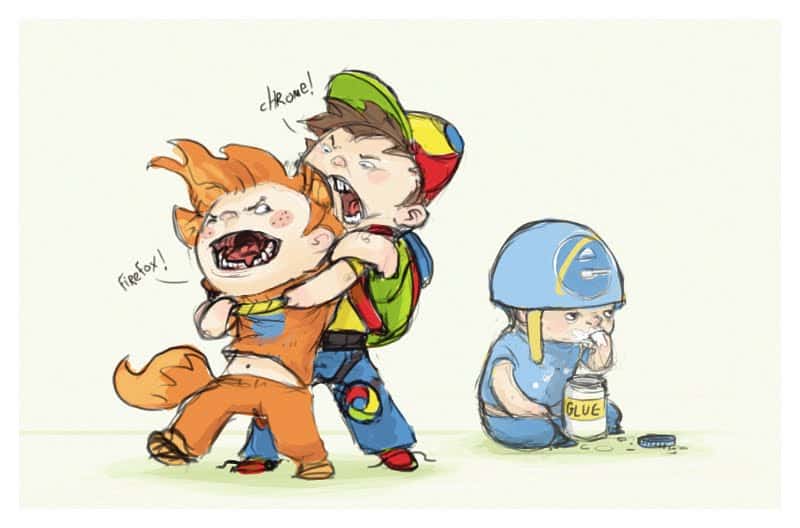 This picture is a classic glue-eating meme that pokes fun at the web browser Internet Explorer.

Yes, people eat glue all the time, but there is no point to it at all.

Many types of glue and epoxies are considered food safe, but that doesn't mean they are good to eat.

I won't personally judge a person if they actually enjoy eating glue; I just hope people know the risks.