As rats are commonly associated with diseases and plagues like the black death, you probably have not thought about eating one. But if you had to, can you eat rats?

People do eat rats around the world, but there are health risks associated with doing so. Generally, at least in the US, rats are considered unsafe to eat because they commonly carry disease.

Some rats can be considered safe to eat when properly handled, prepared, and fully cooked.

It is important to note that in places where rats are normally consumed, people eat rats found in fields and not "city rats."

Now we will dive deeper into the risks of eating rats, how they are usually cooked, and even what they taste like!

Other Great "Can You Eat It?" Guides:

What Happens if you Eat Rats?

While they won't likely crawl their own way onto your dinner plate, what happens if you do eat rats?

If handled properly and cleaned and cooked thoroughly, eating certain rats shouldn't make you sick. However, before doing so, you should do your own due diligence and research the risks.

Rats do clean themselves often in a similar manner to cats, but they are not considered clean animals by any means.

When choosing a rat to eat, you should be picky and search for those out in the wild.

You obviously wouldn't want to eat one killed by poison or one that you found already dead. 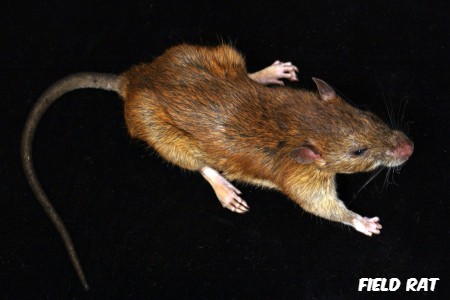 While both can carry disease, field rats have a more transparent diet.

In areas where rats are commonly eaten, like parts of Asia, the diet of the rats includes mostly just rice.

This is not to say that they don't eat gross stuff, but a field rat's diet is cleaner than a city rat.

City rats usually have a diet of mainly human waste which they can usually find in abundance in the sewers.

What Happens if You Eat Rat Poop?

People don't usually go around eating rat poop on purpose, but it can find its way into the foods we consume.

Consuming rodent feces happens accidentally and can make you sick. Unfortunately, rodent poop is found in some of our common foods.

Because it is so commonplace and nearly impossible to filter out completely, the FDA considers a certain amount of rodent feces acceptable in foods.

While this is worrisome, foods and spices go through sterilization processes to help reduce risks of disease transmission.

Do Rats Poop A Lot?

One of the main ways rats and other rodents spread disease is through their poop.

Some rats can excrete more than 50 pellets of poop in a day.  Rats are constantly eating, so it only makes sense that they are continually pooping as well.

A lot of poop means a lot more opportunity to spread disease, so it is important to clean it up properly if you locate some.

The safer way to clean up rodent droppings is not to sweep or vacuum them up but rather by picking them up with proper protection.

You want to avoid stirring up the feces in the air with a vacuum or broom, and then also remember to sanitize the area well.

What Diseases do Rats Carry?

When considering eating rats, you should first know they are no stranger to disease and bacteria.

Rats and mice are known to spread more than 35 different diseases, along with some deadly bacteria. The main diseases and bacteria rats spread today include hantavirus, leptospirosis, lymphocytic choriomeningitis (LCMV), Salmonella, and Tularemia.

Most of the diseases contracted from rats will come from bites, handling them, or coming in contact with their excrements.

What Parasites do Rats Carry?

Rats and other rodents can carry fleas, mites, ticks, and lice, which are all parasitic insects that can carry disease.

In fact, the spreading of parasites is how they helped spread diseases like the black plague so drastically in China and Europe during the 1340s.

The black plague, or black death, was responsible for wiping out one-third of the European population then and still is around today.

It is rare, but this disease can still be transferred to humans by parasites who have first fed on infected rats.

If you are still interested in how rat meat tastes after going over all the risks of dealing with them, you should know that many people actually love the stuff.

Rat meat has its own distinct taste that people describe as gamey but not gross. Rat is often described as tasting really similar to squirrel, rabbit, and even chicken.

If you don't believe it, a simple search on YouTube will prove that many people regularly eat and enjoy rat meat.

The meat on rats is known to be tender and even juicy when prepared correctly.

However, as mentioned before, the most commonly eaten rats are those that eat primarily field crops like rice.

Eating rats is not too out of the ordinary for people in many countries; in fact, people have been eating them for centuries.

Rat is still eaten all around the world but seems to be most popular in Asian countries. It is believed rats have been eaten in China as far back as at least 618-907 AD.

Some of the other countries or areas that are regularly known to eat rats include:

While they still eat a variety of wild animals, China has recently banned the breeding and consumption of certain rats like the bamboo rat since the coronavirus outbreak.

While it is not as common as in some other countries, rats have been and are still consumed in the United States.

One example is in West Virginia, where an original rat stew recipe seems to have originated.

This stew is cooked and shared at least yearly during the West Virginia Roadkill Cook-off.

How to Cook Rat

I am not advising anyone to catch and cook a rat, but here is the most common way it is done if you ever needed to for survival.

A rat can be prepared and cooked in a similar way to a chicken. After killing it as humanely as possible, the basic steps to clean and cook a rat can include:

Viewer Discretion Advised: Rats are killed and cooked in the following video.

Once again, these are wild-caught field rats and not "city" or "sewer" rats.

Hopefully, you never have to rely on living off rats, but at least now you have an idea of what to expect if you do!

It really is best to avoid rats altogether unless you absolutely had to eat one for survival.

So that we don't completely tarnish the rat name, let's examine a few good things they do for us to conclude.

What Benefits do Rats Provide Humans?

While it's easy to see the harm and dangers of rats, there are a few purposes or benefits of the existence of rats.

A few examples of the services that rats do provide to the ecosystem and humankind are: