He also holds the world record for highest card throw 21.41 meters (70 FT 3 IN) and the record for the most accurate card throwing, 46 of 52, playing cards from a deck thrown into a target.

Check out the details on these fast, far, and accurate card throwing records below! 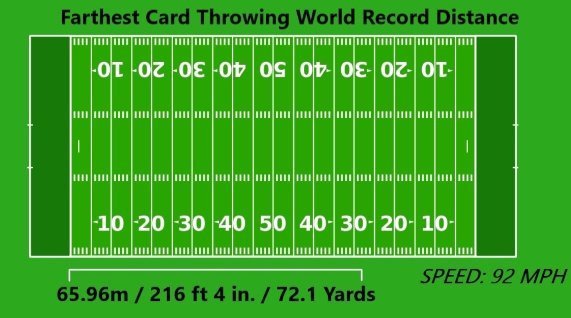 Rick Smith Jr. set the farthest card throw world record when he threw a playing card a total distance of 65.96 m (216 ft 4 in).

This current card throwing world record was set on March 21, 2002, in Cleveland, Ohio.

This throw was also the fastest recorded card throw at 92 mph (148 kph).

The distance he threw the card is almost three-quarters the length of an American football field.

This is about the same as NFL players max football throwing range, 70-80 yards. 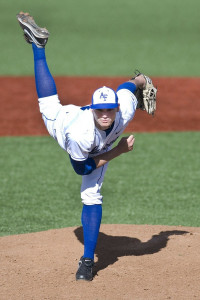 While not an official world record, Rick Smith Jr. has the fastest recorded card throw at almost 92 mph (148kph).

This was recorded when he set the world record for the farthest card playing card throw in 2002.

The fastest land animal, the cheetah, can run up to 70 mph to put this in perspective.

The average fastball pitch from a Major League Baseball starting pitcher in recent years is about 92.3 mph.

This does start to make a little more sense when you learn he was a pitcher on the collegiate level for Cleveland State University.

Want to learn the skill of card throwing? Check out our comprehensive guide on one of the best brands! Banshees Throwing Cards: Review & Guide 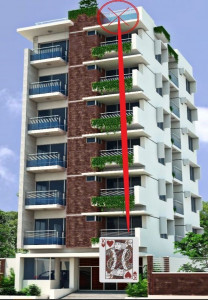 Rick Smith Jr holds the current record for the highest throw of a playing card.

If that doesn't seem that high to you, then look at it this way.

It's the same as throwing a card from street level to the 7th story of a tall building.

That is the height of seven basketball hoops combined and also equal to about ten of the tallest NBA players standing on top of each other.

If you try to throw a card up in the air yourself, you will know how awe-inspiring this record is.

The most accurate card throwing world record was set by Rick Smith Jr. on April 22, 2014.

He threw 46 out of a 52 card deck into a card throwing target with a 12-inch diameter from six feet away.

This officially gives him the most accurate card throwing world record and means he holds at least four world records total.

He later beat this record by getting 48 out of 52 on video, but the Guinness World Records do not officially recognize that attempt.