In the world of cast iron accessories, there is a lot of nonsense and gimmicky products such as "special seasoning sprays" or "dedicated cast iron soap!"

But then there are accessories of real utility that are not only pretty cool, but you'll honestly actually use.

Things that can take the joy of cooking with cast iron to the next level!

So let's get to is and look at some of these awesome cast iron accessories that you might actually use! 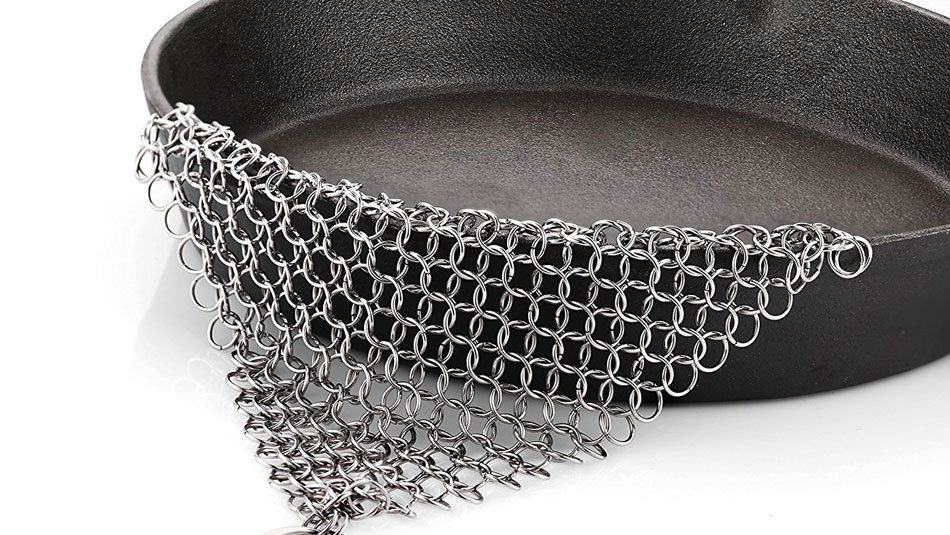 Cleaning cast iron can sometimes be the bain of your existence – especially if that cast iron is new or you are new to cast iron.

While salt and a rag are typically all you ever need to scrub away the burnt remains of your last meal, sometimes we look to live in luxury.

Cast iron chainmail scrubbing pads are a mesh made of smooth and round stainless steel links.

Not only are they very effective at scrubbing away food, but because the metal used to make them is harder and smoother than cast iron, they are non-abrasive to your seasoning.

If chainmail could protect soldiers on the battlefield from the slashing and stabbing of swords, imagine what they will do to a little burnt on food?

Cast iron is a beautiful piece of cookware, but if you've used it long enough, you know that one of its most irritating features is that the handle often gets just as hot as the rest of the skillet.

While using a kitchen towel or an oven mitt works just fine, it doesn't give you a great grip, and there is always that chance that something could slip.

Cast iron is hot and heavy, and the last thing you want to do is drop it on your foot or that poor fluffy little animal eyeballing your food.

This is where a silicone handle holder saves the day. They fit snugly onto the handles of your cast iron skillets and insulate your hands from the heat. Most silicone holders provide up to 450 Degrees F+ of protection.

No slippage, no burnt hands, and they are very cheap!

If cheap silicone isn't refined enough for your tastes, how about leather?

Not only do you get the beautiful smell of fresh rawhide every time you cook a meal, but your hands also get significantly more protection from the heat.

Just like cast iron, leather gets better with use. It also gives your skillets a real rustic and classy look!

Lodge makes a beautiful spiral-stitched leather handle holder that can protect your hands up to 600°F – that is 150°F more insulated than the silicone handle holder.

Alright, we may have fallen slightly down the handle holder rabbit hole, but not all cast iron cookware has a little stub to slip some rubber over.

Some cast iron cookware – such as larger skillets, dutch ovens, woks, or even teapots – have "loop-like" handles that regular handle covers like the ones above won't fit.

So if you're using something other than just a regular cast iron skillet, consider picking up a set of silicone assist handles for a super tight grip on whatever cookware you're using.

There isn't much variety for this type of cast iron accessory. However, Crucible Cookware does a great job filling the void with their Cast Iron Hot Handle Holders. 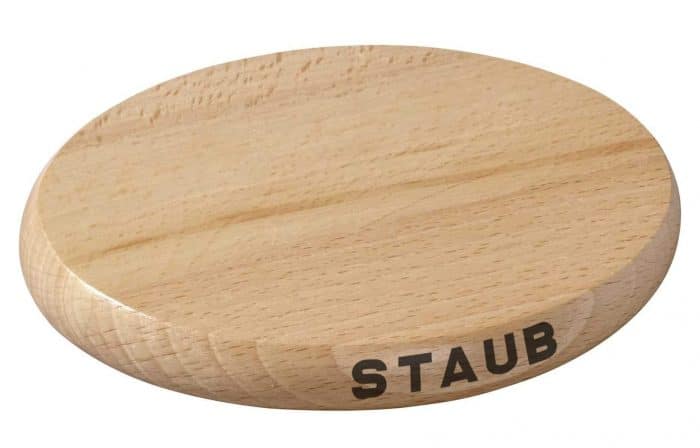 The last thing you ever want to do is take your hot cast iron skillet and set it directly on your table or countertop.

Furthermore, cast iron is well known for holding its heat, and even placing your skillet on an oven mitt may not be enough to stop that high heat from seeping through into the beautiful wood of your kitchen table.

So if you want to serve your skillet straight from the stovetop to the table, consider picking up a trivet. 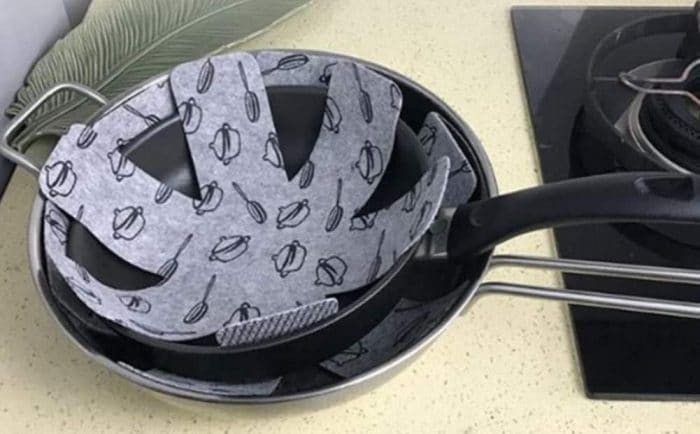 There is nothing more precious than a well-established seasoning on our favorite cast iron skillets.

This beautiful polymerized layer of oil gives us that wonderful non-stick surface and should be cherished and protected.

Like most people, you likely stack some of your cast iron away in a sad and dark closet – and by doing so, you risk scratching your seasoning.

If you want to keep the seasoning on your cast iron skillets and pans in pristine condition, consider picking up some pan dividers.

They are a cheap and effective way to keep your cookware from rubbing and scratching each other during their sad hibernation in the cupboard. 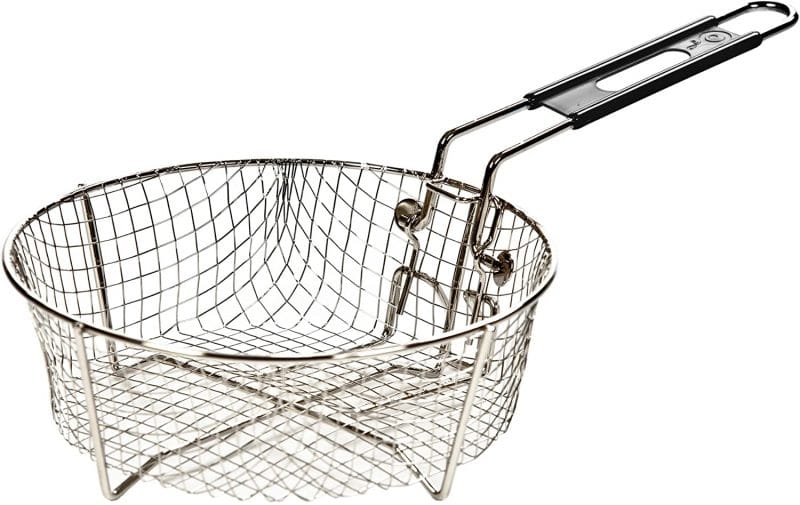 Did you know that you don't need a fancy deep fryer to cook that perfect fried chicken that makes people salivate from miles away?

All you need is a dutch oven, a fry basket, and some paper towels to drench the grease! 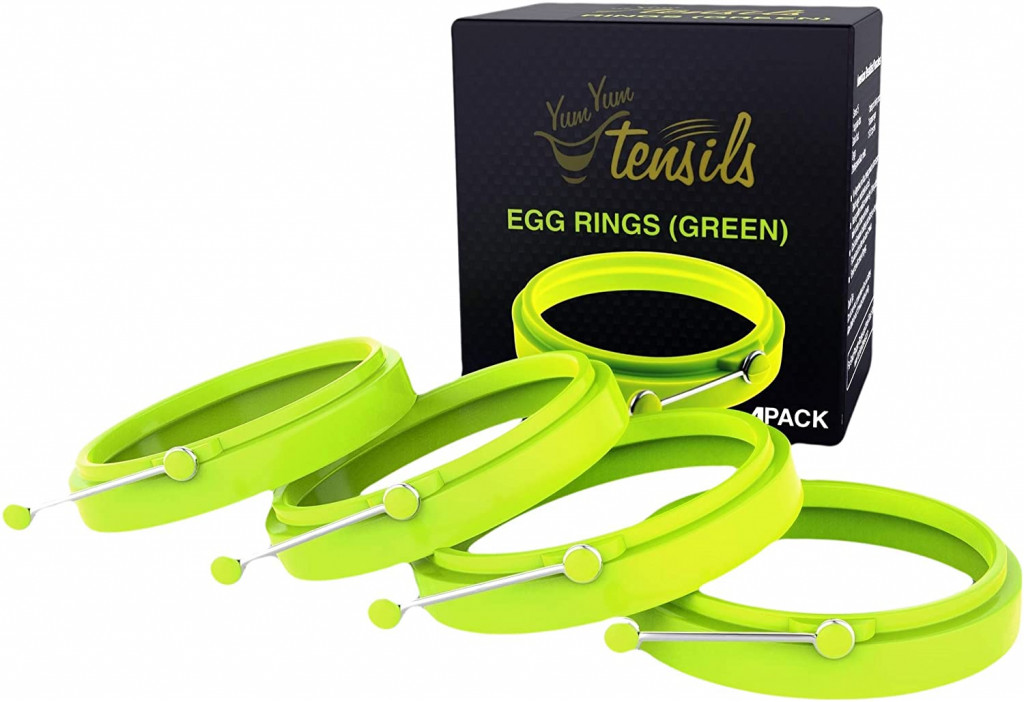 Sticky foods like eggs and pancakes are not ideal foods to cook with a new – or newly seasoned – cast iron skillet.

However, once you cast iron has built a nice coating of polymerized oils, sticky foods should no longer be an issue.

But what might be an issue is trying to cook several eggs, omelets, or pancakes at the same time without drooling into each other on the pan.

A nifty little cast iron accessory called an egg ring allows you to cook several individual eggs, omelets, pancakes, or anything else runny without the collision and without using several skillets. 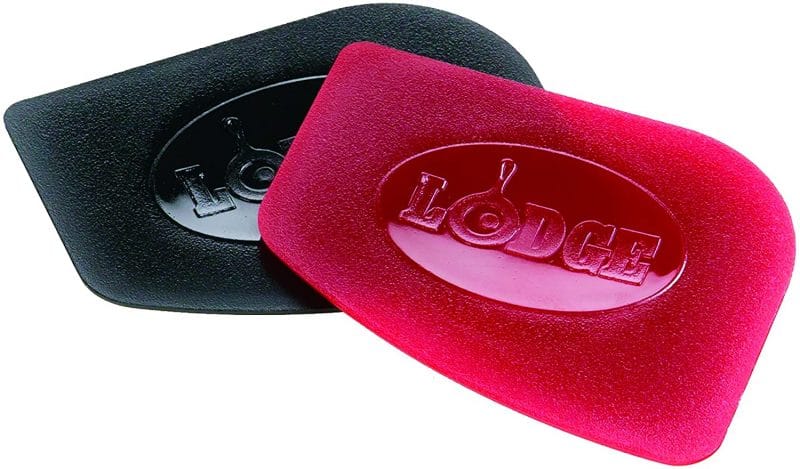 "I have been told I cackle madly when using these. Where there used to be frustration and curse words there is now glee and sweet satisfaction." ~ Pan Scraper Customer

Pan scrapers are an easy and safe way to remove stuck-on food or grease without roughing up your seasoning.

They are also great for non-cast iron cookware and removing pesky stickers!

However, they are known to melt, so don't use them on any cookware that is fresh out of the oven and hot-as-hell! 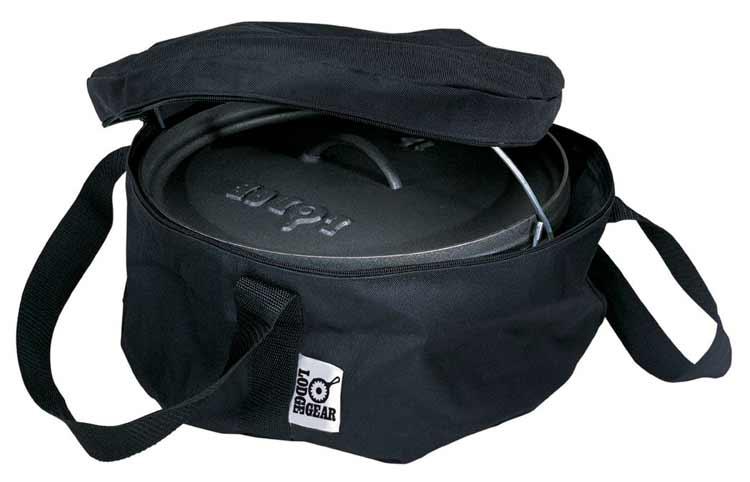 So you just pulled your famous tater-tot hot dish out of the oven, and you need to transport it over to the in-laws for Thanksgiving dinner.

But, the problem is, cast iron holds its heat, and driving around with a blazing hot dutch oven riding shotgun is a disaster waiting to happen.

No worries! Just pack it away in dutch oven carrying tote and travel worry-free. 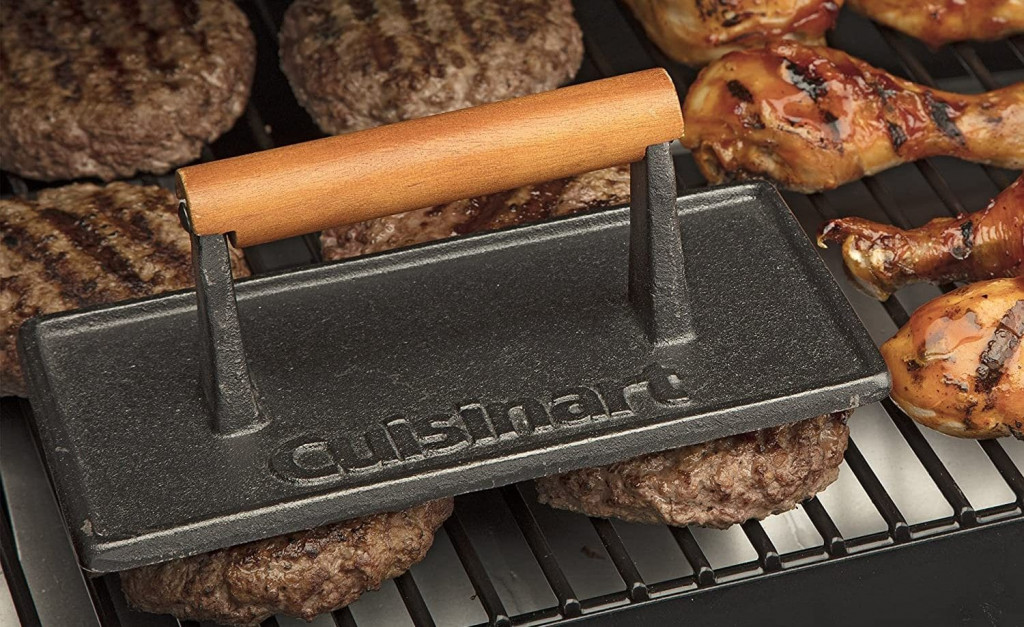 Hate when your bacon curls up into a wavy and greasy strip of sadness? Squish!

The grill press gives anything under it's crushing power a perfect and tasty sear. 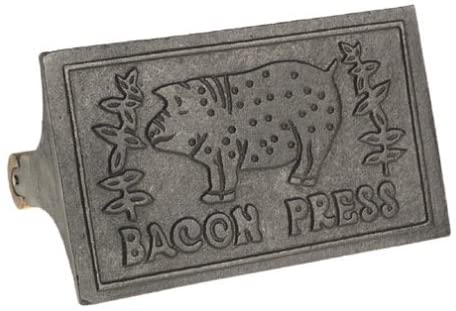 Regular bacon is for peasants.

Why use a simple grill press on your bacon when you can use a bacon press.

This nifty hunk of metal will imprint a little piggy on your tasty bacon to remind you and everyone else that bacon doesn't grow on trees.

Everything is better with a "SQUISH!"

If a chainmail scrubber is too much shine for your taste, you may fare better with a cast iron scrub brush.

While they have a much shorter lifespan than chainmail, they truly do make short work of cleaning food and grease off cast iron – without scratching up your beautiful seasoning!

Hot water and this brush are all you need. No salt and no greasy rag required. 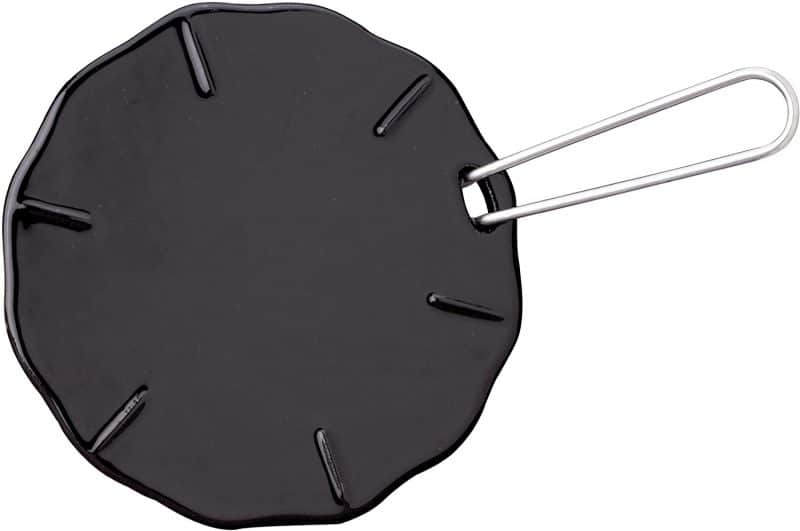 Cast iron is an amazing piece of cookware, but it doesn't always play nice with others – especially glass-top stoves.

Cast iron is heavy and has a rough surface, which can easily scratch or crack your glass-top if you are not careful.

One way to reduce the risks of using cast iron on your glass-top stove is to use a heat diffuser.

These awesome little products act as a buffer between your stove and cookware and transfer heat quickly and evenly – without scratching and scuffing your stovetop. 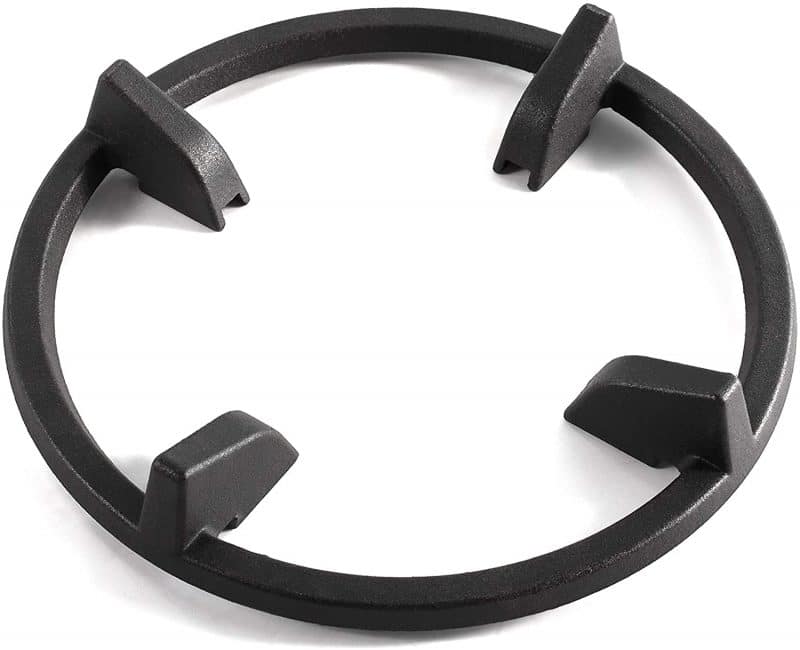 If your cast iron wok has a round bottom and you are using it on a flat-surfaced stovetop – you may be experiencing some problems.

A wok ring is similar to a heat diffuser where it acts as a buffer between the stovetop and the wok. However, where they differ is that they are made for the round bottom of the wok and allow you to toss your food – as a wok should be used.

They also help focus the heat on the bottom of the wok, rather than much of the heat being lost from being applied to parts of the wok that aren't touching the stove.

So if you want to up your cast iron wok game – or any type of wok – pick yourself up a wok ring and get tossing!

Just make sure you get one that will fit your stove! 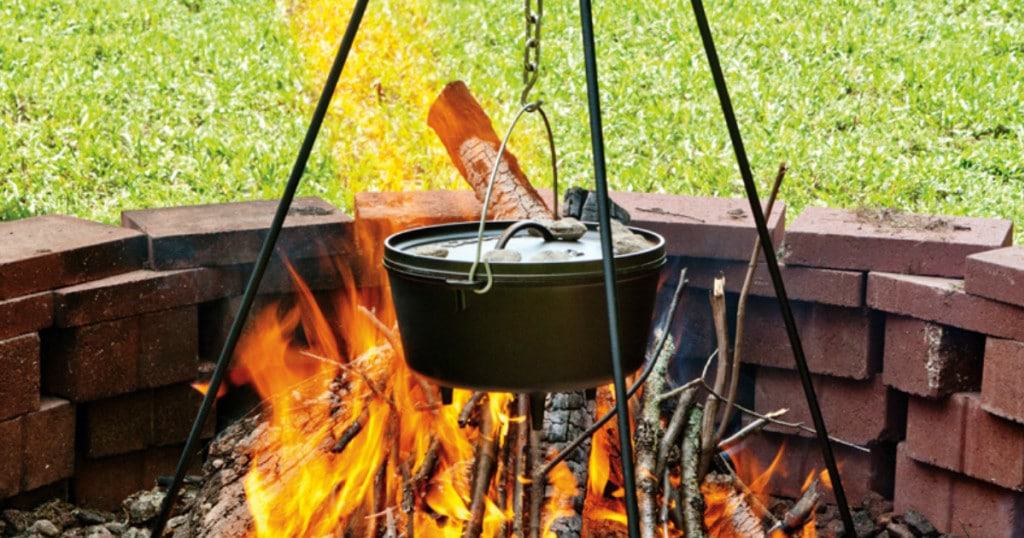 Cast iron is very versatile and can be used in many places outside of the kitchen – such as while camping.

If you're looking to cook a stew or soup using those fresh mushrooms and rabbits you just harvested from the bowels of nature, you're going to need something sturdy to hang your pot on.

Lodge's heavy-duty and adjustable camp tripod will serve you well!

Bonus: This awesome cast iron accessory is great for the survivalist prepping for that next disaster, when social distancing out in the woods, or cooking while on the run during the zombie apocalypse.