Learn how to fold a dollar bill origami rose with this detailed guide for money origami.

This money rose is relatively easy for beginners and can be used to gift different amounts of money.

In this tutorial, I will use three one-dollar bills for the rose and one for the optional stem, but you can substitute them with larger bills.

The folding is easy, but the shaping and assembly can be a bit harder.

We will use three bills for the rose and one for the stem. 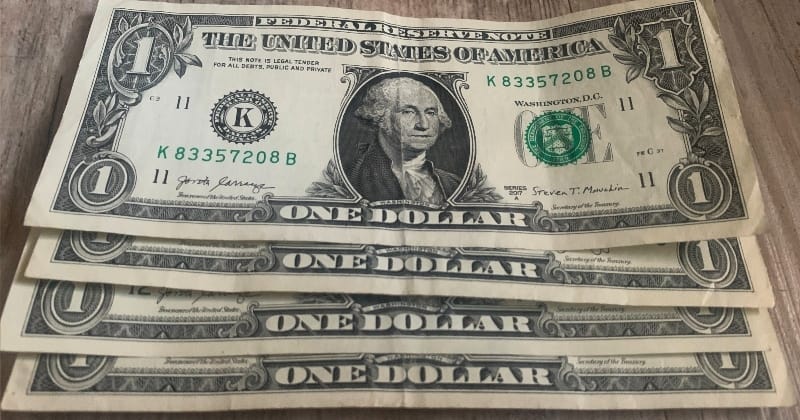 You will also need some tape, scissors, and a pencil if you want to attach a stem.

We will start on the front side of the first dollar bill.

STEP 1: Fold the bill in half from right to left 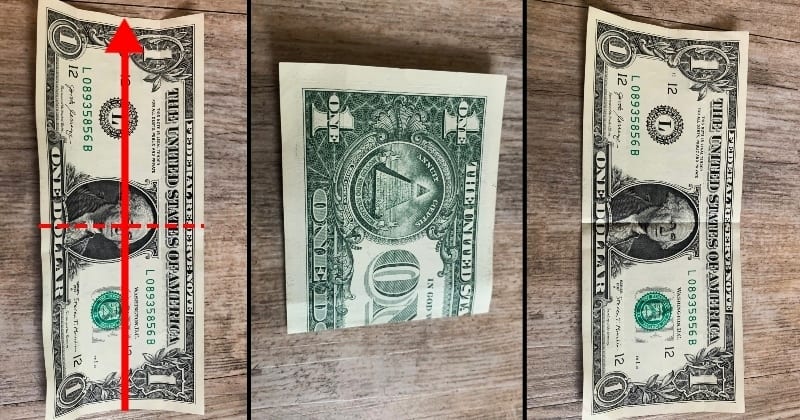 After folding the bill in half like shown, crease the fold well.

STEP 2: Fold the bill in half lengthwise 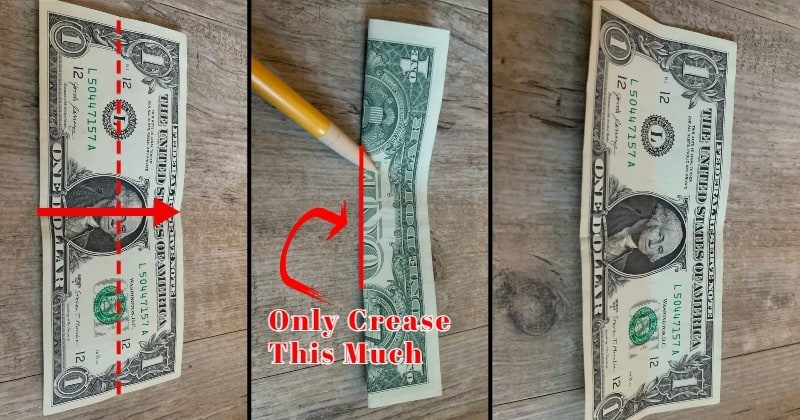 Fold the bill over but do not crease the bill end to end.

Crease the middle portion of the edge as shown above.

STEP 3: Bring both bottom edges to meet the center 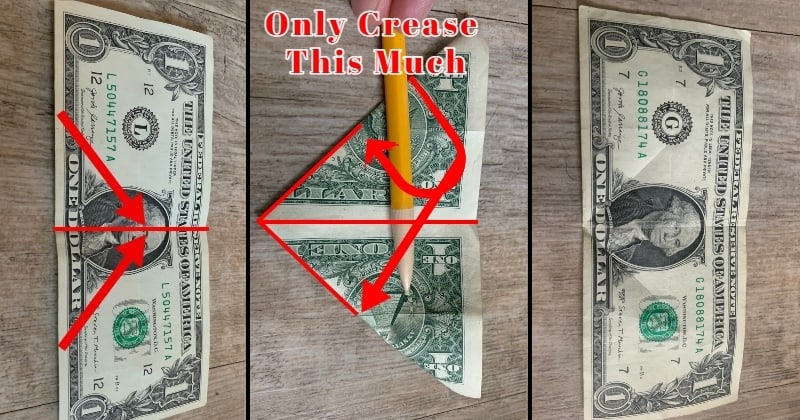 Fold the bottom edges to meet the middle vertical crease.

Only crease about halfway and then unfold the bill.

STEP 4: Repeat the last process with the top edges 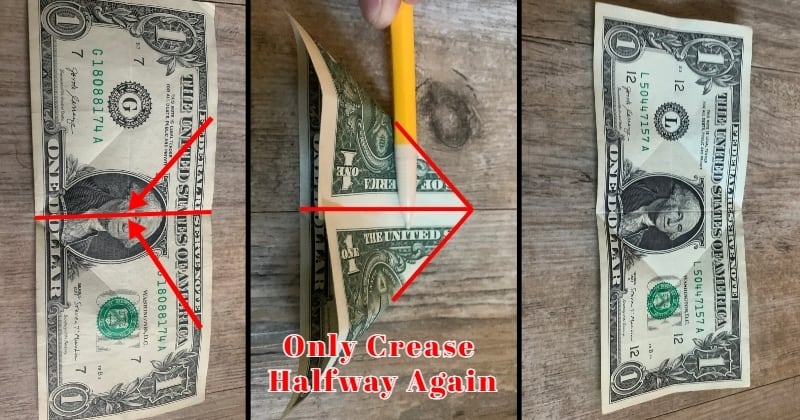 Fold the top edges to meet the middle vertical crease.

Only crease about halfway and then unfold the bill.

The goal is to make the creased square, as you can see in the last picture.

If you over crease a little bit, it is fine, but try to keep it as close as possible.

STEP 5: Fold bottom to center, flip over, fold the tip 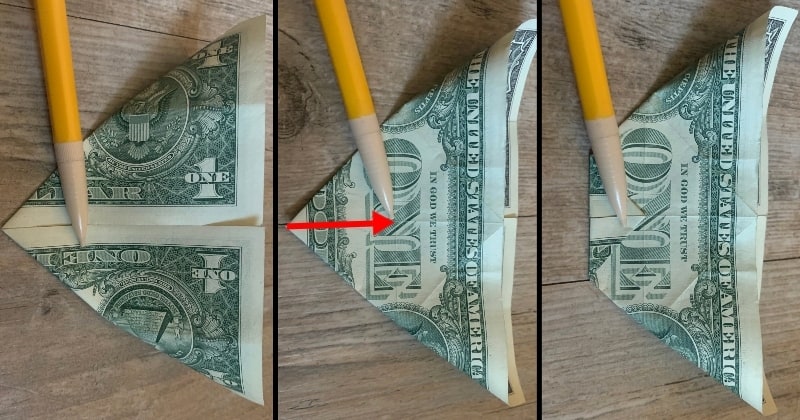 For steps 5-6, we just make a point and fold it to the center on the top and bottom.

Start by repeating step 3 to fold edges to center again and then flip over the bill.

After flipping the bill, fold the tip to the center and crease.

STEP 6: Repeat the process for the top of the bill 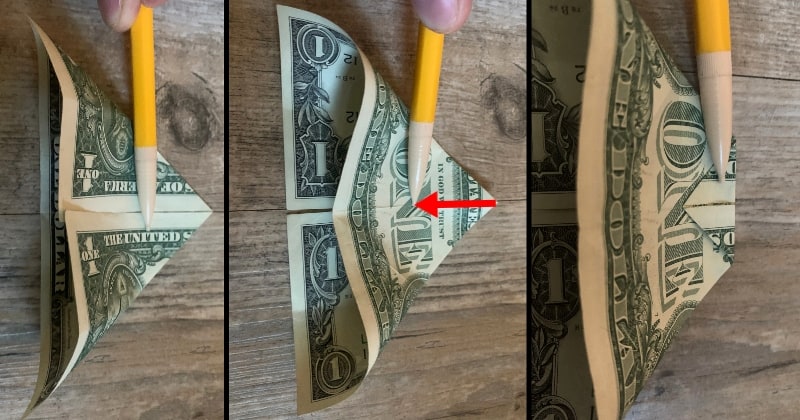 Just repeat the step 4 folds to center again and then flip over the bill.

After flipping the bill over, fold the tip to the center and crease.

Steps 5-6 will help us make the base of the petals.

STEP 7: Curl the edges and form the base of the center 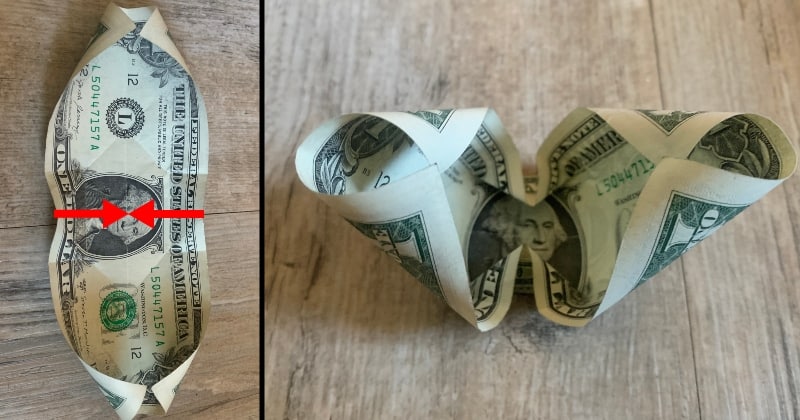 Curl the edges of the bill inward with scissors or a pencil.

With scissors, just carefully pull the edges tight and drag them across the blade like you would when curling a ribbon.

Otherwise, you can just use a pencil to roll the edges around it till you get the shape you want.

You can shape them more later if you want so they don’t have to be perfect at the moment.

Lastly, push the middle edges together and make the tip form the base.

STEP 8: Fold the next two bills up to step 6

The last two bills will have the same folds as the first.

After getting to step 6, make the base by pushing the tips in like before 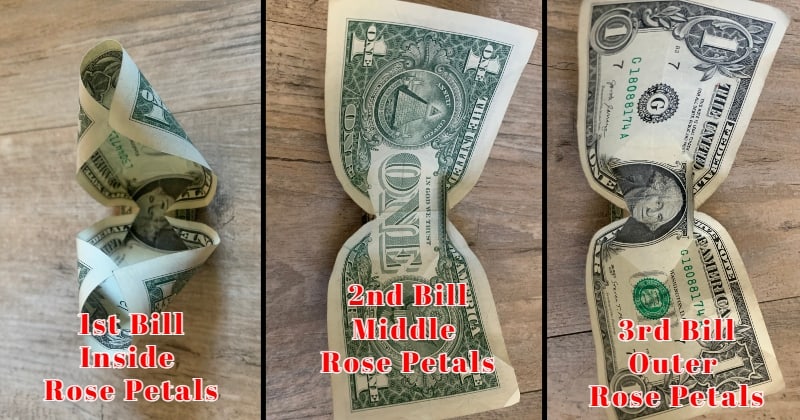 As you can see in the middle picture, I did it the opposite way to add character.

It doesn’t really matter how you do it as long as you have three bills with the base formed so far.

STEP 9: Curl the edges of the 2nd and 3rd bills

For the 2nd and 3rd bills, we will curl the bills just slightly outward. 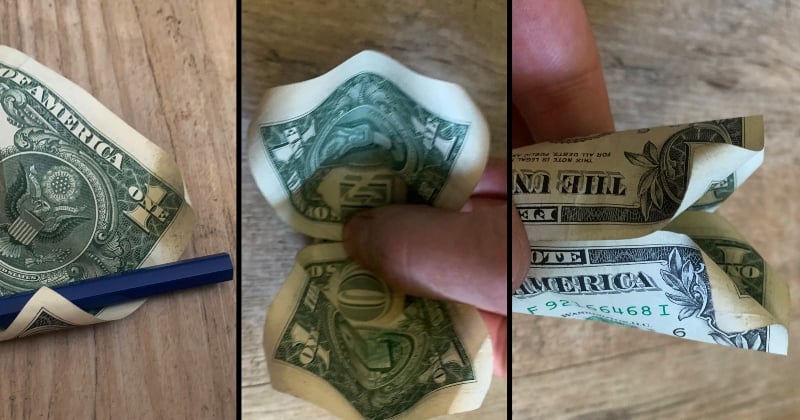 This can, of course, be achieved with a pencil or cautiously with the edge of scissors.

Shape them to your personal preference because it is pretty hard to get them exact every time.

There are two methods you can use to assemble the rose.

The easier method is to put a thumbtack through the bottom of the three roses into the eraser. 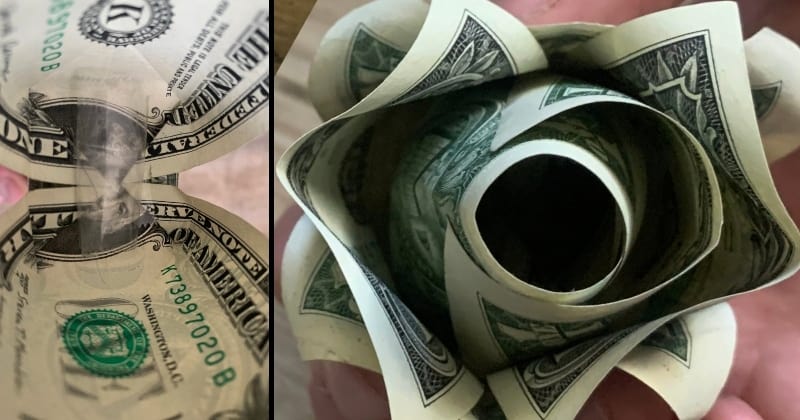 The tack will hold the bills together and allow you to attach the rose to the stem.

The problem is you are not supposed to cut or put holes in money, but I won’t tell.

Otherwise, you just have to use tape where you see fit to hold the rose together.

I used the tape method on this rose.

If you are using the tacking method, you can attach it by sticking the tack through into the eraser.

Here is how I attach the stem to the rose without poking holes in the money. 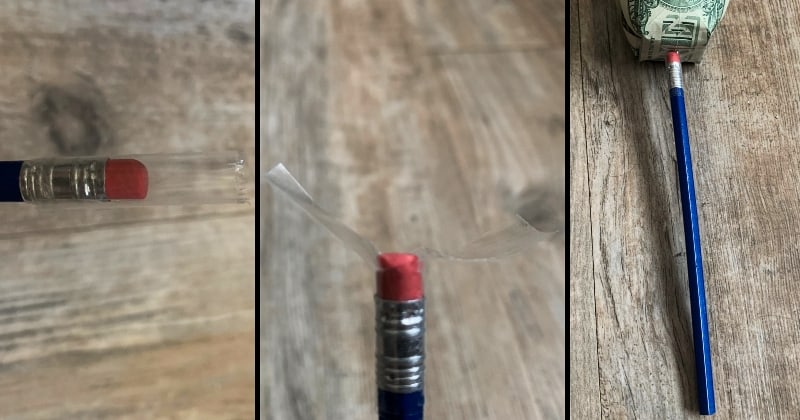 Wrap some packing tape around the end of the pencil and cut the tape to make two attached strips.

You can repeat this process again and add another layer for extra stability.

Tape one of the edges of your pencil as straight as possible.

Rotate the pencil and keep the bill as tight as possible to wrap it around the pencil. 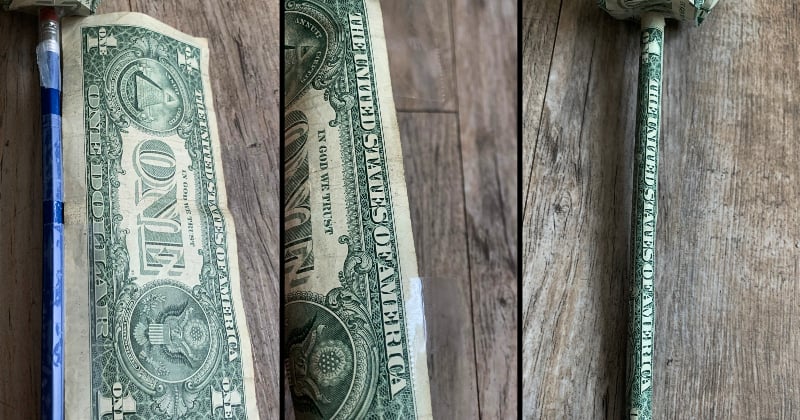 I used three pieces of tape to complete the wrap and make sure it was completely straight.

If you have green gardening tape or something similar, you could wrap the stem with that instead.

The shaping and assembly is the hardest part.

It can take a little time and some extra tape, but it is pretty sweet when finished! 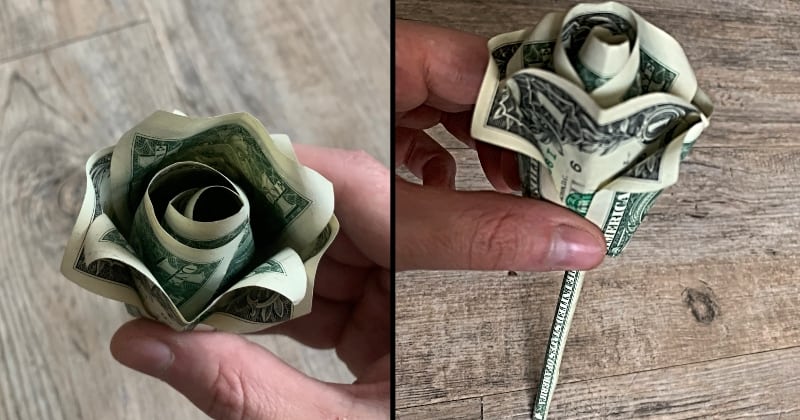 That’s how you make a money origami rose! 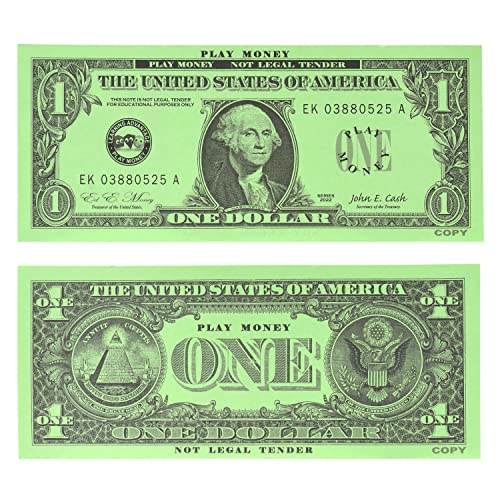 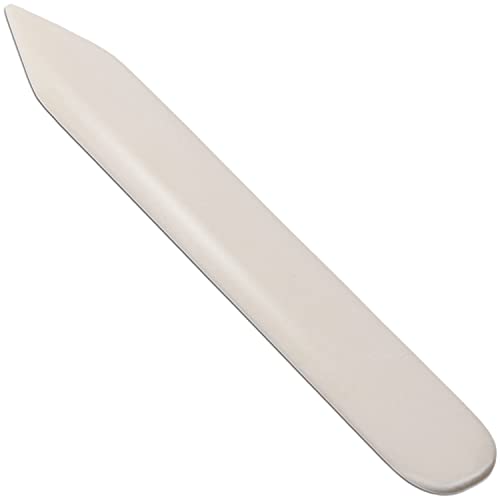 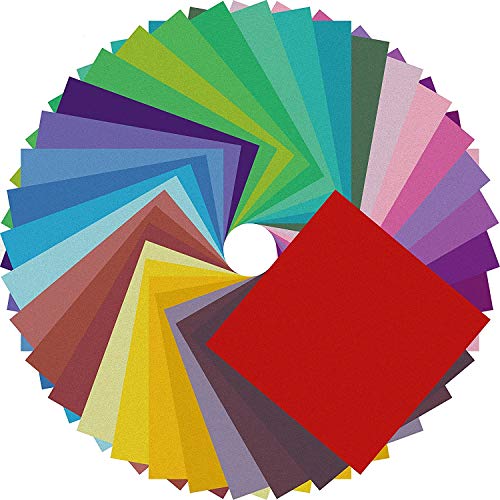