How to Fold an Easy Origami Crab

Did you know a group of crabs is called a “cast”?

With this simple instructional folding guide, you can make a cast, or just one easy origami crab!

For this tutorial, I used a red sheet of square origami paper.

If you don’t have square paper, you can always make a normal paper square.

1. Fold the paper in twice from the points 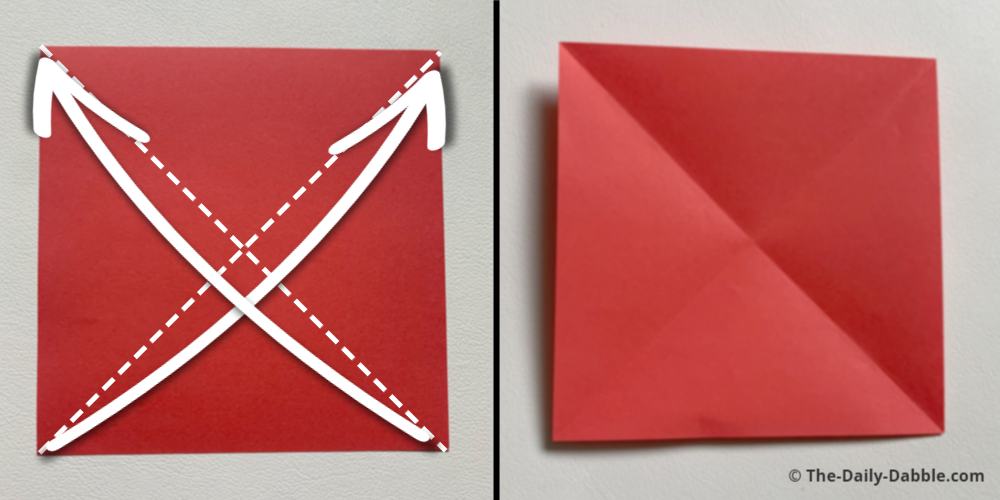 Fold the paper in half from one point to another and then unfold it.

Repeat folding the paper in half from the opposite points.

Unfold the paper again after the second fold, and you should have two diagonal creases.

2. Fold the paper in half from edge to edge 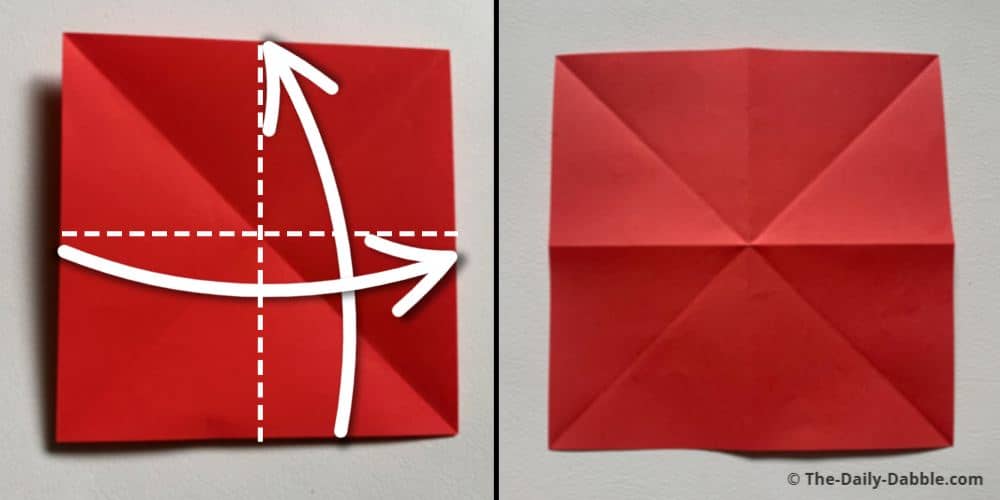 It can help with the next step to make these two folds on the opposite side of the first ones.

Fold the paper in half two more times from the edges this time.

Unfold the paper after each fold to be flat again and ready for step 3.

3. Fold the paper into a triangle 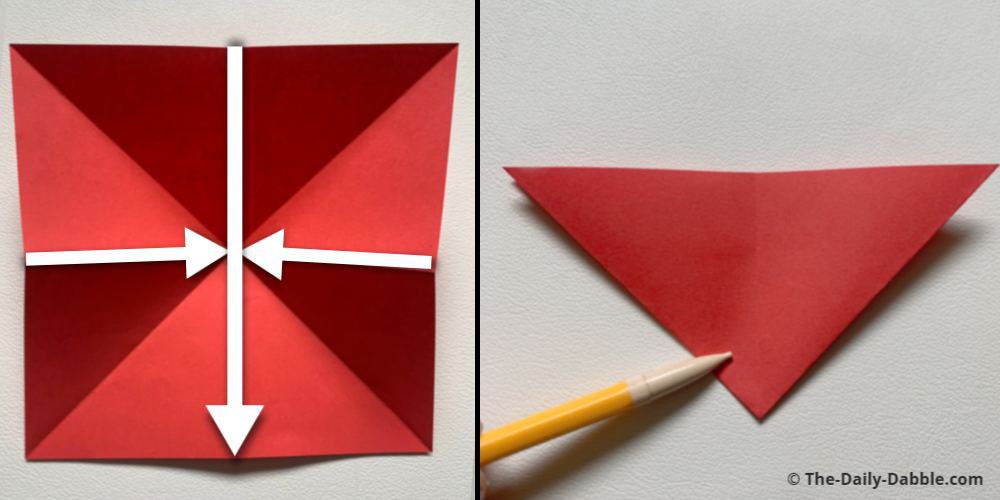 Bring the middle edges in and then fold the top triangle to meet the bottom.

If you have trouble with the creases, simply fold the paper the opposite way on the creases to make it more pliable.

What you have folded now is one of the main origami bases known as the waterbomb base. 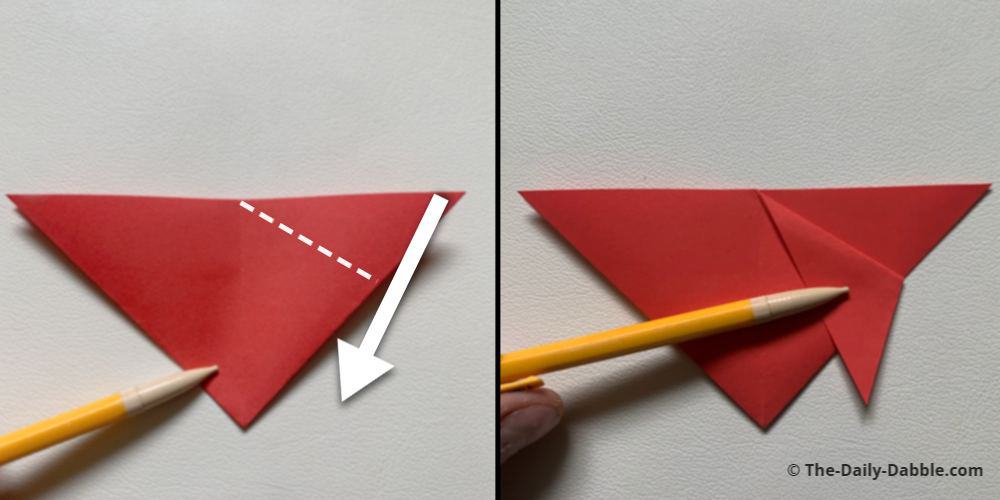 Make the crease of this fold at an angle while bringing the point down.

5. Fold both flaps over to the left 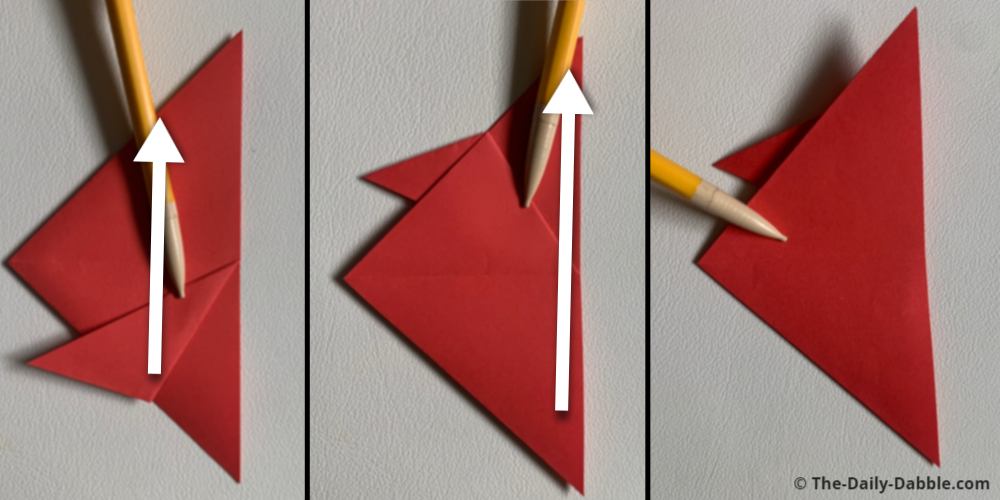 Bring the flap you just folded over to the left and then the next flap as well.

6. Match this flap to the one folded underneath 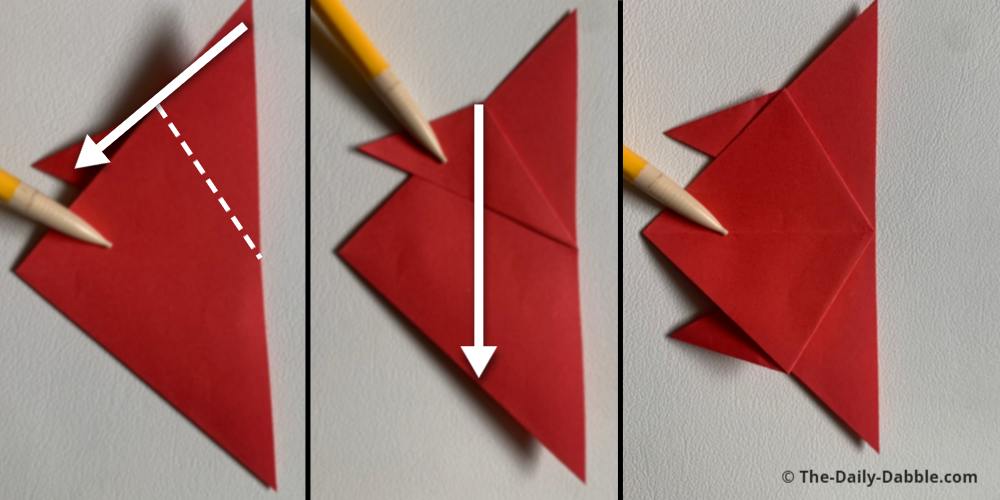 Mirror the flap you folded in step 4 to evenly match the crab’s back legs.

Once you are done, fold the top flap back over to the right.

7. Fold the base edge of the triangle over evenly 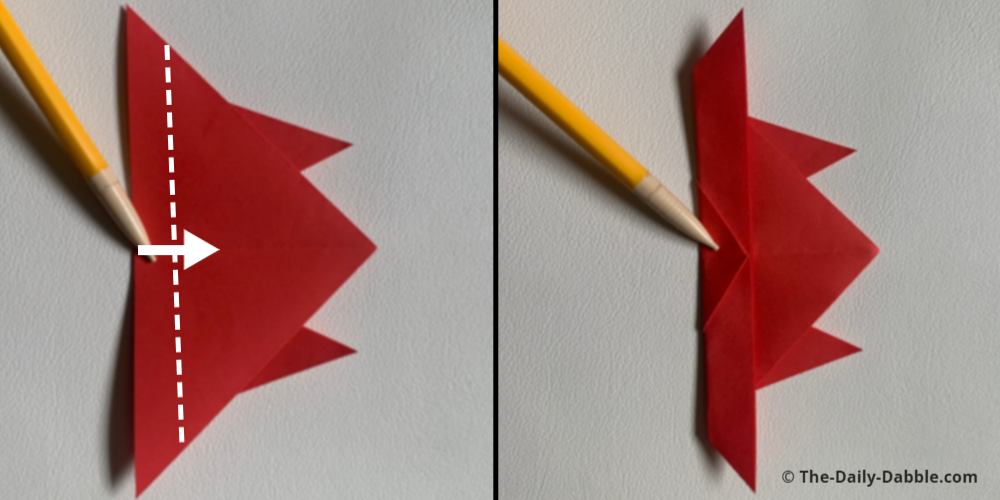 Fold the long flat edge of the triangle evenly over as shown. 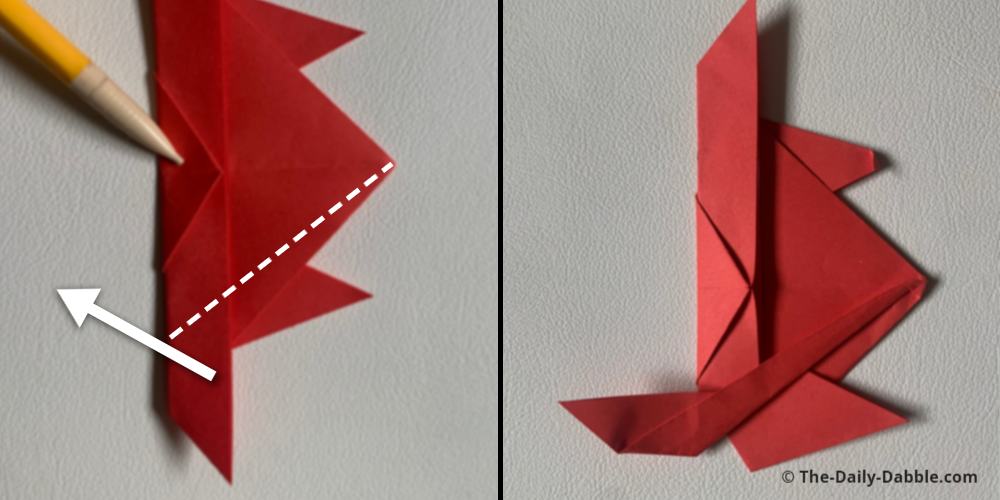 Using the picture as a general guide, make a diagonal crease bend the claw straight outward. 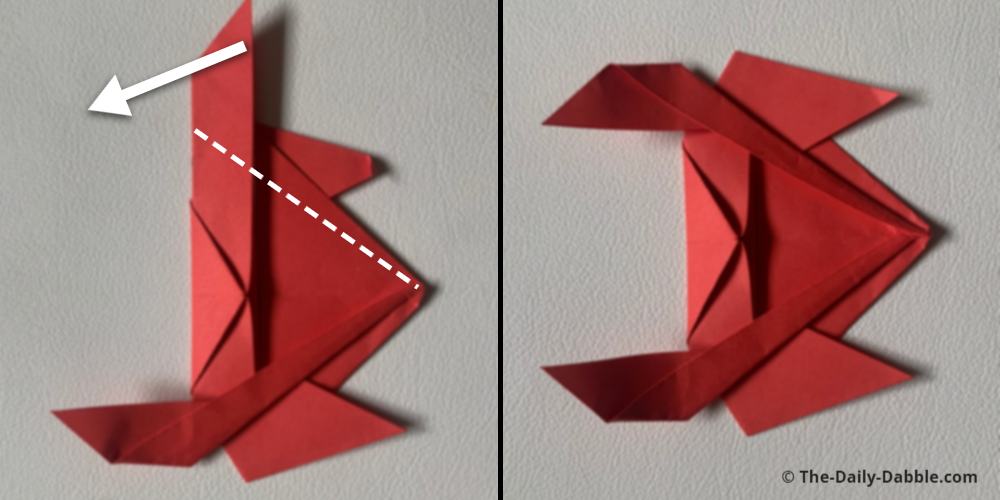 Fold the opposite claw the same way by mirroring the fold from step 8 on the other half.

10. Shape the back point of the crab 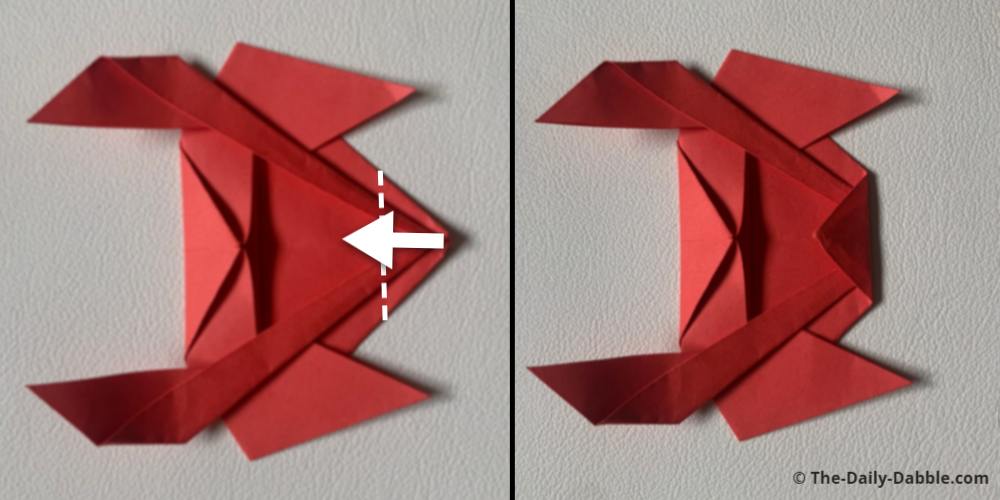 Fold a small triangular section of the back of the crab underneath, as shown.

11. Finish by shaping the claws a bit more 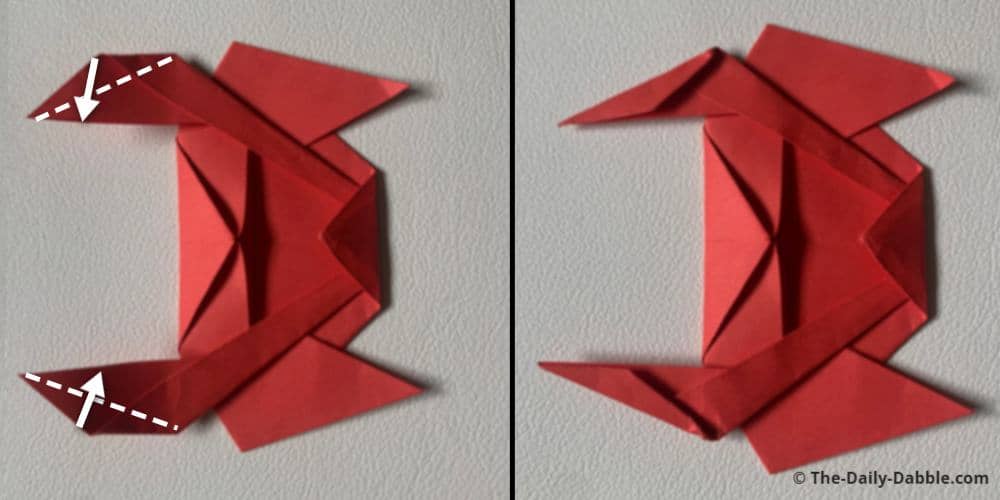 Make diagonal folds on the claws to shape them a bit better.

These folds match the diagonal edge of the claws to the main flat edge.

Now you have your own little origami crab that you can decorate how you like! 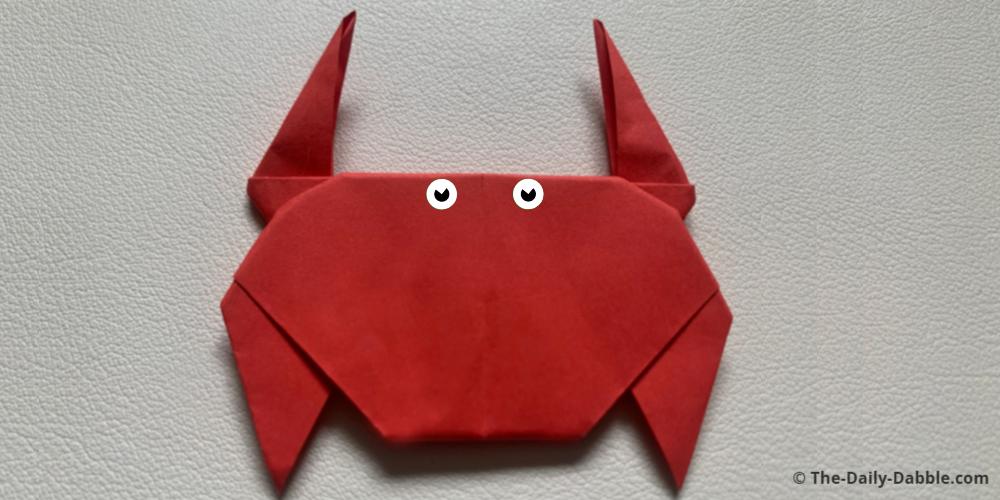 If you liked this origami crab design, check out the origami angelfish or paper duck folding guide.