6 Foods You Should Not Cook in Cast Iron

Beyond the obvious of not cooking something ridiculous like charcoal, such as in the image above, what else should we not cook in cast iron?

While cast-iron seems like an indestructible and all-in-one cooking device, it does have a few flaws that may not make it the most desirable cookware for some foods.

However, I'm happy to say the list of foods is VERY small.

And while none of these foods will ruin your cast iron skillet, there are a few things you should be aware of.

So let's take a look at six foods you should not cook in cast iron! 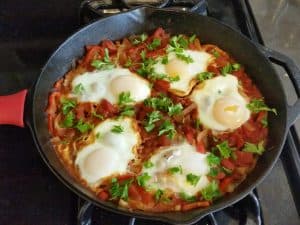 Do your best to avoid cooking with highly acidic foods – such as tomato sauce, lemon juice, vinegar, or even wine.

The acid in these types of foods can quickly eat away at the polymerized fat layer on you cast iron skillet, which ruins the seasoning. This can quickly cause your cast iron to rust and will remove its hard-earned and non-stick coating.

Even worse is it can ruin the flavor of your food. Acidic foods can break down the iron on a molecular level and transfer it to your food.

While not harmful, it can leave your meal with a metallic flavor.

So while you may hate cooking your food in anything other than your iron cast, consider picking up a steel skillet for your pizza sauce!

When you first start using your cast iron skillet, you should do your absolute best to avoid cooking sticky and non-oily foods such as eggs or pancakes.

The reason being is that you want to avoid any foods that will stick or burn-on and force you to be a little rougher while cleaning, which can strip away your seasoning.

Even if you think your new cast iron has a great seasoning on it, resist for the first weeks until you know it is broken in and well seasoned.

Stick to cooking fattier foods to help build up that polymerized layer of fat, and in no time at all, you’ll be able to cook the most delicious eggs you’ve ever eaten on your cast iron without any issues!

While cooking eggs in cast iron is tough, many people prefer it as an alternative to toxic non-stick cookware. 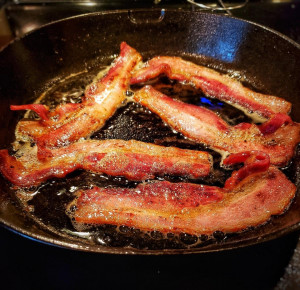 The beautiful thing about cast iron is that its porous surface can hold flavor.

However, this can quickly become a double-edged sword if you previously cooked something very stinky, and it's now leeching into your next meal.

So if you don’t want your next few meals tasting like garlic or fish, avoid stinky foods – especially slow cooking.

Or another option is to pick up another cast iron and dedicate it as the stinky food pan! They are not that expensive and have several sitting around is never something to fret about. 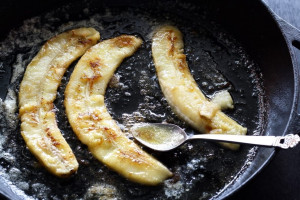 Remember a second ago when I mentioned that cast iron really holds flavor and then transfers that flavor to another meal?

We'll when it comes to making dessert, you likely don't want it to taste like bacon.. or maybe you do?

Now that we mention it, bacon-flavored angel food cake does have an interesting sound to it.

Regardless, if you plan on cooking savory meals and desserts, consider picking up another cast iron pan for the sweet stuff!

So this one kind of goes back to the same concept as not cooking sticky stuff.

Fish can be very delicate and flaky when cooked and will stick no matter how much butter or oil you throw in.

Even with well-seasoned cast iron, delicate fish like flounder and tilapia can prove to make a total mess.

So if you want to avoid ruining that beautiful polymerized coating off your skillet while attempting to scrape off fish skin, leave the fish for another type of skillet – or at least the delicate ones!

While this technically isn't something that you shouldn't cook in cast iron, it is important, and I thought I would throw it in for good measure.

You do not want to store food in your cast iron!

In addition to taking up a TON of space in your fridge, the moisture and acid in your left-over food can begin to degrade your seasoning and rust the pan. Not the mention your food is going to taste like metal.

So keep your cast iron in good condition and take your food out of it as soon as you can!

That about covers all the foods that you might not wish to cook in cast iron – or at least some that you should be cautious of.