Grifola frondosa, also known as hen of the woods, sheep’s head, or maitake, is a choice edible mushroom sought after for its great taste and suggested health benefits.

The name “hen of the woods” comes from the fact that the growths of this mushroom can look like ruffled feathers of a hen, but others think it looks like a sheep’s head and therefore call it that.

Maitake is a Japanese term meaning “dancing mushroom,” which comes from old stories stating that people would dance with joy after finding them because they were so delicious and rare.

In Japan, clusters have been recorded to grow as big as 50 pounds, earning it the title “King of Mushrooms” there.

This article covers ways to identify the hen of the woods, how to tell them apart from look-alikes, and even how to cook them.

How to Identify Hen of the Woods 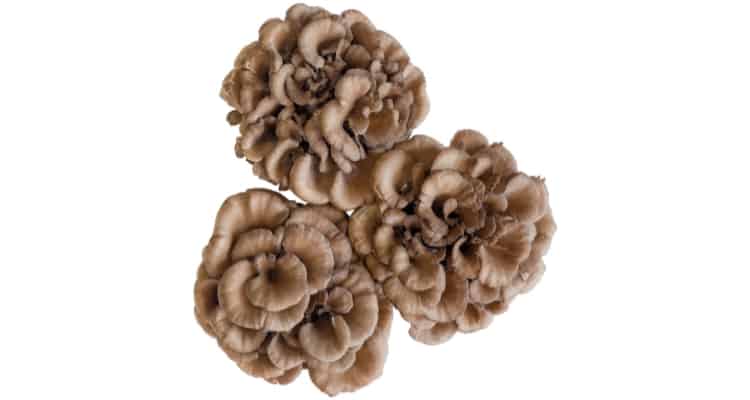 The caps can be nearly pure white or range from creamy brown to grey.

The margins are often wavy, and the fronds can look the shape of spoons.

Full fruiting clusters can grow to around 100 cm (40 inches) normally.

This polypore mushroom does not have gills but has pores that release its spores.

The stipe is off-center and will get firmer as it ages.

It can range in color from white to tan like the caps.

The spore print is white.

These commonly will be found on or at the base of oak trees or other hardwood trees.

Grifola frondosa is commonly found in areas of China, Japan, Europe, and the Eastern United States.

The normal fruiting season is late summer to autumn.

The most common hen of the woods look-alikes are:

Polyporus umbellatus, or the umbrella polypore, is rarer and will have smaller and more rounded caps.

Sparassis crispa,  one of many called cauliflower fungi, will usually be paler and is more commonly found at the base of conifer and pines.

Luckily the hen of the woods does not have any poisonous close look-alikes that are easily mistaken for it.

Grifola frondosa is a popular edible mushroom that foragers and chefs love, so what does it taste like?

The hen of the woods or maitake mushroom has a pleasant earthy taste that can be described as slightly peppery when fresh. The maitake tastes best after being cooked with light salty seasonings. When cooked, this mushroom is succulent and not too firm.

The maitake mushroom is great in all recipes you would normally think a mushroom well with.

They are great on pizza, in pasta sauce, a great addition to a pan-seared steak, and are great when cooked and eaten on their own.

Hen of the Woods Price Per Pound

You will usually find this mushroom sold under the maitake name, and they are relatively expensive compared to normal store-bought mushrooms.

When purchased fresh, the average price of hen of the woods mushrooms averages around $15 – $25 a pound. Dried maitake will cost more in the range of anywhere from $31 – $80 per pound. The cheaper-priced dried mushrooms are usually foreign-grown with no claims of being organic.

You can find dried maitake with a quick Amazon search, but for fresh mushrooms, you will have to look to an online grower that will ship within your area or at a local market.

Hen of the Woods Benefits

This mushroom is most commonly referred to as maitake in the health world and has many health-promoting properties and compounds.

Hen of the woods mushrooms are rich in vitamin D and contain bioactive polysaccharides that have many different well-tested benefits. These compounds can boost the immune system, help manage blood glucose levels, and have antitumor properties. They contain beta-glucan as well, which can help reduce cholesterol alongside the polysaccharides.

As with most mushrooms, Grifola frondosa also needs more solid research and should not be considered a cure to any disease but rather a possibly helpful supplement.

You should, of course, never eat any wild found mushrooms or use them to treat a disease without consulting an expert. 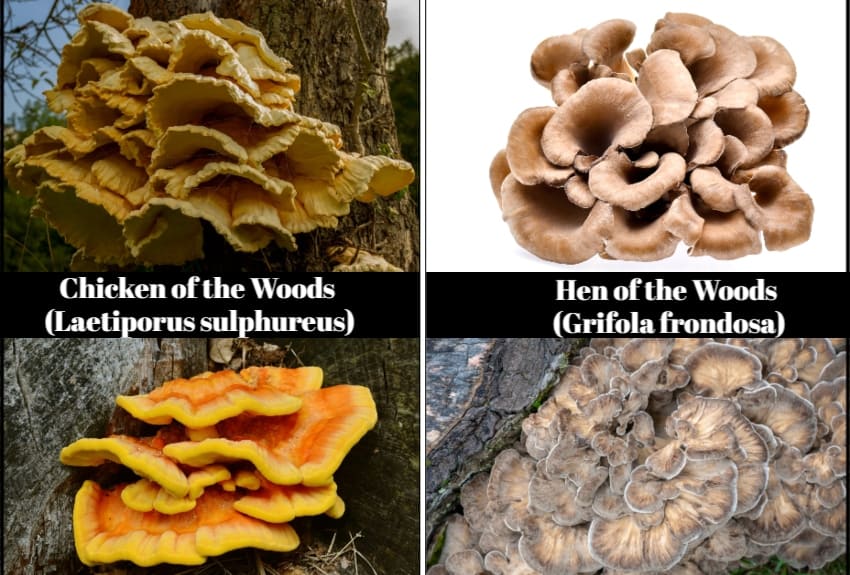 Hen of the woods (Grifola frondosa) and chicken of the woods (Laetiporus sulphureus) are often mentioned together because they are both choice edible mushrooms with poultry-related nicknames.

They are not really that hard to tell apart, as the chicken of the woods has much brighter orange colors.

Chicken of the woods seems harder to find for purchase online and will usually be a little more expensive than the hen.

The chicken of the woods has a better overall taste and is compared to chicken, crab, or lobster meat.

They both have a relatively similar fruiting season from summer to autumn.

One important thing to note is that the chicken of the woods can be confused with the orange-colored Jack O’Lantern Mushroom, which is poisonous.

How to Clean & Cook Hen of the Woods

Here are a few normal tips for cleaning and preparing the hen of the woods:

Remember, it’s better to throw chunks out if they are questionable in any way.

Some basic ways to cook the hen of the woods are:

After cooking in one of these ways, they can be eaten individually or added to another dish.

The best methods for storing maitake mushrooms are freezing them after they are cooked or freeze-drying them.