If you haven't checked the new Halo NERF guns, you are in the right place because we tested them to give you an honest review of each one.

These NERF guns are based on those from the top-rated Halo video game series and can be used for regular battles, props for costumes, or even kept as collector's items.

These foam-slinging Halo guns focus primarily on visual design, but some perform well compared to other NERF guns.

We reviewed these and considered design, feel, usability and performance to rank them from best worst.

We reviewed the five Halo NERF guns, and while they each are cool in their own way, one stands out above the rest.

The best Halo NERF gun out now is the NERF Halo MA40 Motorized Dart Blaster. It is a motorized semi-automatic replica of the primary assault rifle in the Halo games. This gun shoots at around 70 FPS, making it the most powerful and sure to please any Halo fan.

We also listed the other off-brand Halo NERF guns below in the buyers guide at the bottom of this article if you want to see those too!

Here are the Best Halo NERF Guns in 2022

Now let's take a closer look at these guns to go over the pros and cons of each! 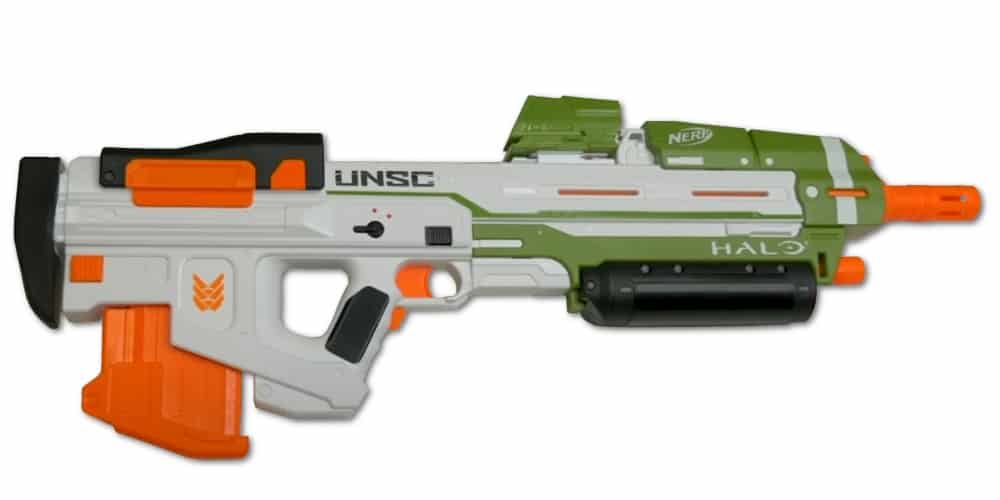 This gun is easy to use as it is battery-powered and simply requires you to push the rev trigger before firing.

It is powered by four C-type batteries (not included), which are simple to install in the compartment on the left side of the gun.

This NERF assault rifle shoots Elite darts at around 70 FPS and about as fast as you can pull the trigger.

Adding to the AR's overall Halo look is the included bullet counting sight that looks similar to the actual one.

However, it is just cosmetic and doesn't function as an actual sight.

The sweet white tactical rail riser will allow you to add a different usable scope on the top if you want.

If you are looking for another battery-powered gun, check out our automatic NERF guns article to find the best. 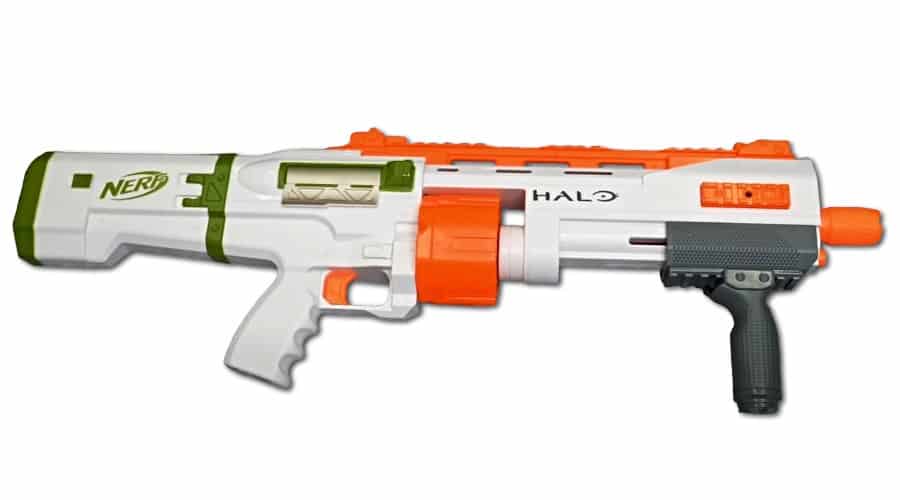 It is a smooth firing gun that is primed with the front foregrip and shoots at around 70 FPS.

You simply load it from the front into the 10-round drum and pump it like a shotgun before each trigger pull.

It shoots standard Elite darts but has a good quality shotgun feel.

One of the sweetest features is slam fire which means you can hold the trigger and fire as fast as you can pump.

It is perfect for those who want to aim a few shots but then unload the ammo quickly in a close-quarter battle.

This Halo shotgun has solid flip-up iron sights and an N-strike tactical rail if you want to attach a scope.

My only complaint is that while ten rounds is a decent capacity, you can't upgrade it or use another clip because of the drum design.

The Halo NERF Bulldog still works great and can be a lot of fun to add to your NERF arsenal. 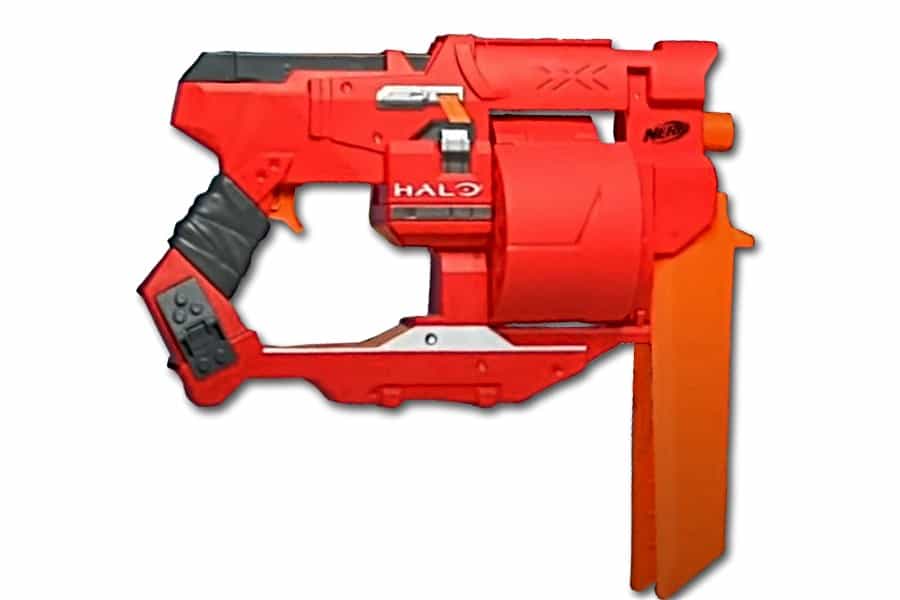 The NERF Halo Mangler Dart Blaster is 6 round drum firing gun based on the Brute Mangler from the new Halo Infinite.

No other NERF gun looks close to this one with its orange "fangs" on the front that are purely for looks.

This Mangler has a unique loading drum loading system shielded by plastic to make it look better.

To load it, you pop the red drum-looking plastic aside and front load the darts before closing it back up.

Like the rest of these Halo guns, it shoots Elite darts and has an N-Strike tactical rail if you want to attach a scope.

For a bigger gun, I'd like it to hold more than six darts, and the compartment drum design makes it a little slower for loading.

However, this is one you would buy primarily for the cool looks and not for high performance.

It fires smoothly, doesn't jam easily, and fires at the average 70 FPS like the other bigger Halo guns. 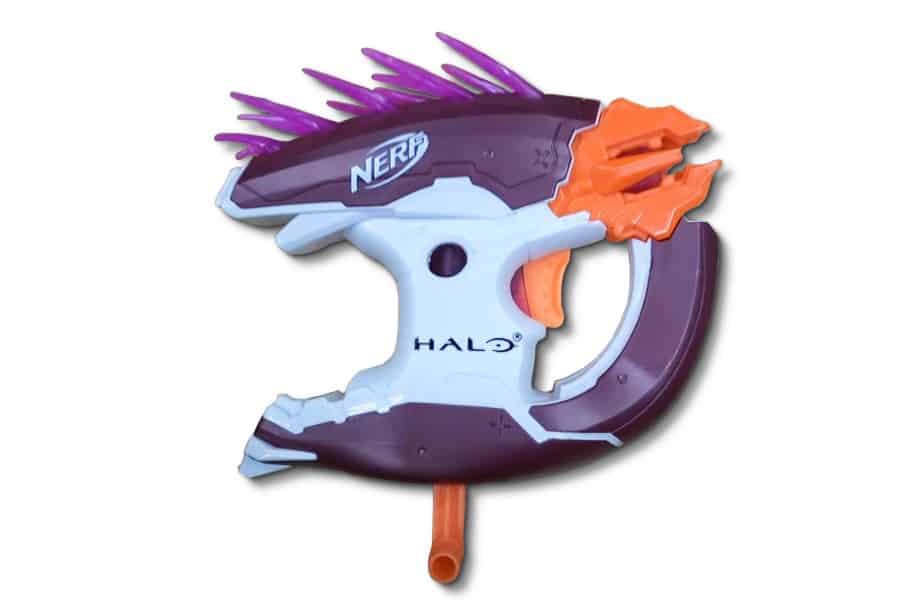 The NERF MicroShots Halo Needler is an awesome-looking single-shot gun that is sure to turn some heads in a NERF battle.

It is a little smaller than most would hope for with the needler design but is high-quality for a microshot.

You prime the darts with the basic priming handle and fire the pink Elite darts one at a time.

The standard cons with small NERF guns are the low ammo capacity and a small cramped grip.

It shoots around the normal NERF microshot average of 50 FPS, which is ideal for younger kids.

The accuracy and range are nothing to rave about either, but those pink needles are pretty freaking cool. 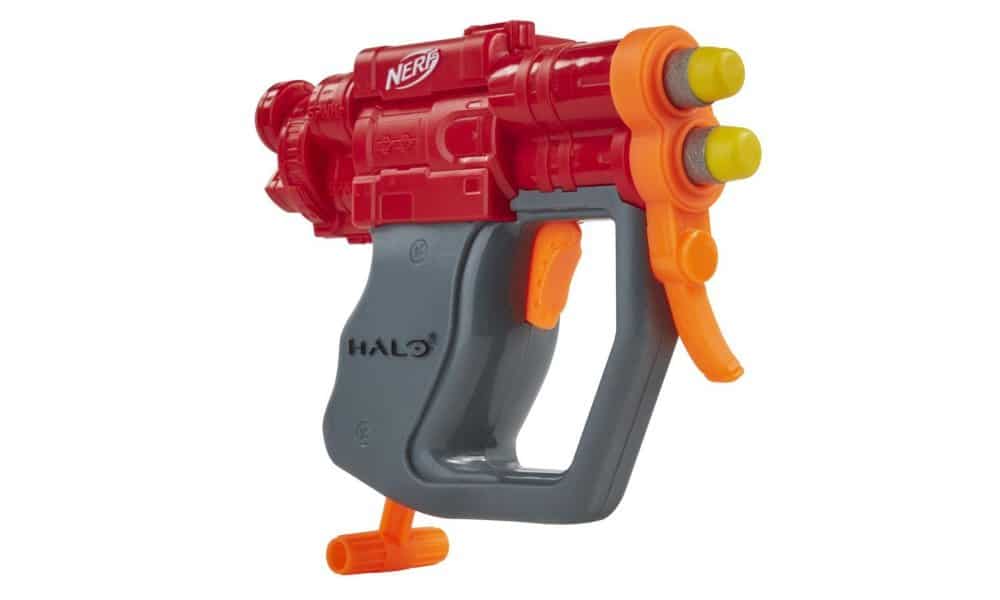 The NERF MicroShots Halo SPNKr is an obviously mini pistol designed after the Halo rocket launcher.

In all honesty, I wish they would make it a full-size Halo rocket launcher firing NERF rockets.

Nevertheless, these small guns can still be a lot of fun for a younger age group.

It operates with a simple priming handle that allows you to fire one dart at a time.

Only the lower barrel fires, so you can't just fire both bullets by pumping twice and firing.

You have to pull the upper dart out and load it into the lower because the upper barrel is for looks and dart storage only.

It shoots the darts at around 50 FPS which is typical for NERF microshots.

Overall this is just a very affordable option for those to add to their Halo or NERF collection.

For most people, the decision of which Halo NERF guns to buy is mainly made by which one looks best.

However, it can also help to compare the features.

Here is what each gun is best for, in our opinion:

In case you still can't quite decide on which is right for you, here are some of the basic specs side by side that might help.

Here is how fast each gun shoots the darts(Feet per second) and how many darts they can fire before needing to reload.

Something to note with these guns is that the grips are pretty small, making them a bit hard to use for a long time.

However, this isn't a significant problem, and they are easy to hold with a costume or when role-playing.

The exception is the Bulldog shotgun which feels pretty good on both that trigger grip and foregrip.

For your info, another company, BoomCo., has also made some decent off-brand NERF guns.

We didn't include them on the best Halo NERF list because they are older and more expensive due to their now limited availability.

They still look very cool and could make an excellent prop piece if you can find one and are willing to spend the extra dough.

Here are some links if you want to see at least what they look like:

Halo is one of the most popular and successful video game series, with the newest game, Halo Infinite, out in 2022.

Any of these guns are sure to please both Halo and NERF fans out there.

Be sure to check out the pros and cons of each one in our reviews so you know exactly what you are getting.

Just like the BoomCo. Halo guns, I feel like these will eventually increase in price and become popular collector's items.