There truly is nothing greater in this world than a delicious and crispy deep-dish cast iron pizza.

This homemade cast iron pizza will be the best thing your tongue has ever had the privilege of touching. That I guarantee!

You may also enjoy these other pizza articles:

So, now that we have all the goodies we need to craft this amazing cast iron pizza, how do we make it?

The amount of dough you use will depend on the size of the cast iron skillet you are using and how thick or thin you want your crust to be.

If you are using anything larger than a 12″ skillet and want a moderately thick crust, consider using your entire 1lb serving of store-bought dough or single serving of homemade dough.

However anything smaller than 12″ skillet, you may consider tearing off a little dough or just making 2 thinner crust pizzas!

After you’ve determined how much dough you’ll be using, our next task is to shape our dough.

Dust a large cutting board or any other hard surface—such as your countertop—with a little bit of flour and throw your dough on it.

Next, using your hands or a rolling pin begin to flatten your dough into a disc.

Now that we have our dough ready, it’s time to prep our oven and cast iron skillet! 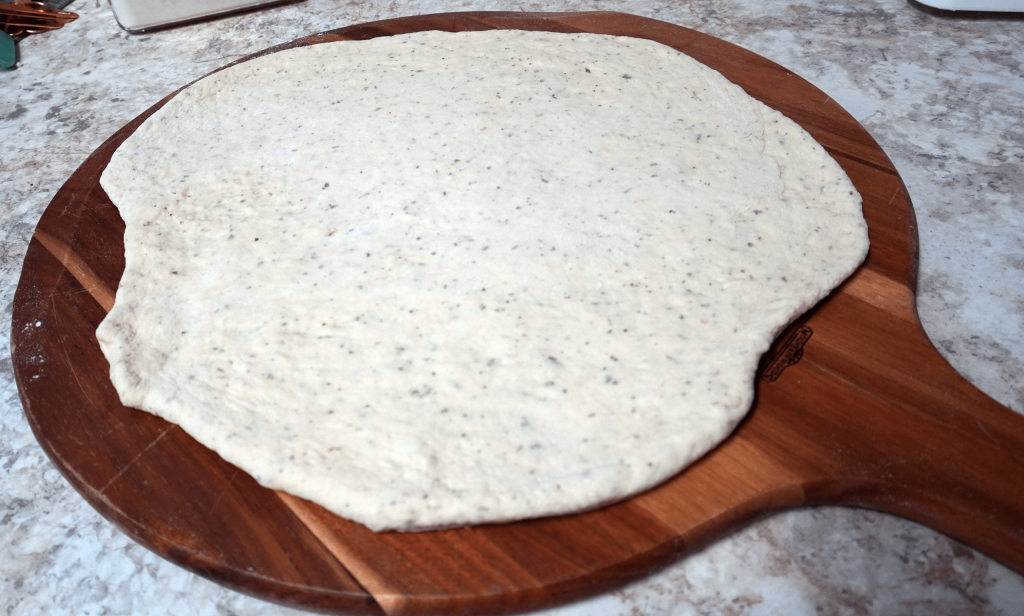 This step is easy! Simply move one of your oven racks to the middle shelf and begin preheating the oven to 475°F!

Cast-iron gets very hot and if we cook our pizza on the bottom shelf the bottom of the pizzas is going to cook much faster than the top.

To remedy this, we’re going to move the pizza a little higher up and a little closer to the source of heat. This will help give that golden brown crisp to the top of your pizza.

Before we can put our dough on our cast-iron skillet we need to preheat and oil the skillet.

Place your skillet on the stovetop at low-medium heat. If you’re using a smaller skillet such as an 8″ or 10″, pour about a tablespoon of olive oil or butter into your pan.

However, if you’re using a larger skillet such as a 13″ or 15″, double that to 2 tablespoons of oil or butter.

Allow your skillet to warm up and spread your butter or oil around evenly on the bottom and up the sides. 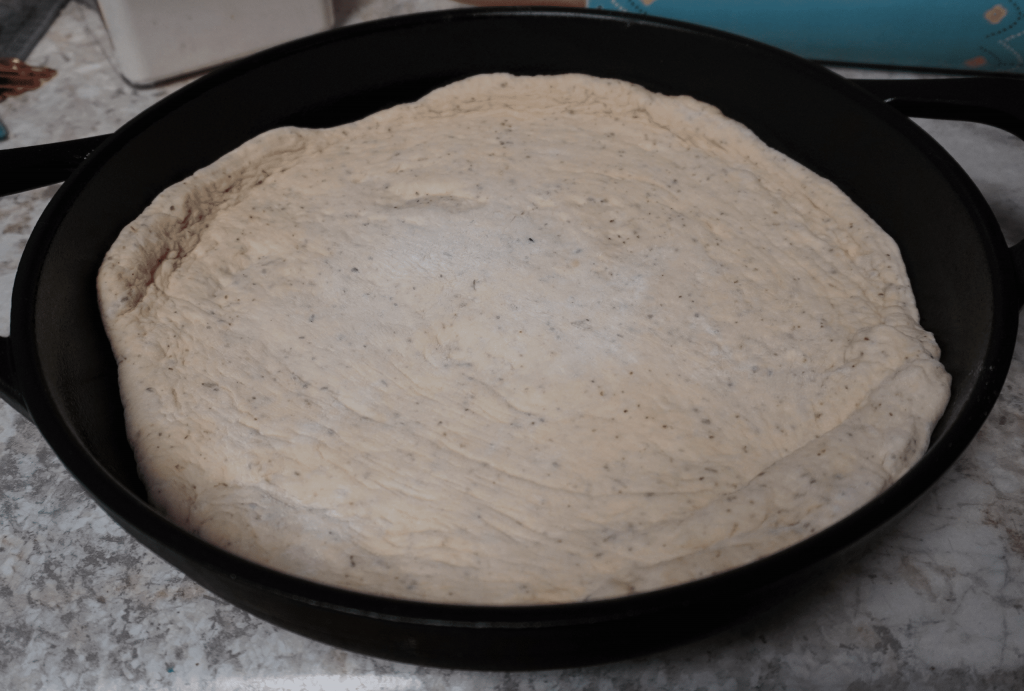 In my experience doing this quickly and with confidence is the way to go. If you take too long or are scared of putting the dough on the skillet unevenly, the dough is going to stretch, rip, or bunch up.

Just grab and throw! The oil will let it slip around enough to position it correctly if you fail miserably.

If you have extra dough running up one of the sides, either rip it off or squish it down. I prefer squishing it down as you can probably see in the picture above!

Next, melt 2 tablespoons of butter and add 1 teaspoon of garlic powder. Note, you can also use olive oil as an alternative to butter.

With a pastry brush, begin to rub down the surface of your pizza paying special attention to the edges.

This rub will give your pizza crust that garlicky-buttery and breadstick like texture and taste. It will also prevent your sauce and toppings from seeping into your crust and making it soggy. Yuck!

Next add your sauce, all your favorite toppings, and put it in the oven (middle rack!!) for roughly 12 – 15 minutes.

You may have to leave it in longer, but you’ll know it is done when both the top and bottom of the crust has a golden brown crisp to it.

And by all means, cook it longer if you like a little black on top!

Once you think it’s ready, pull it out and let the cast iron cool on the stovetop for a couple of minutes before trying to scoop it out of the skillet.

Using metal spatula pull your pizza out of the cast iron and let sit for a little bit longer before cutting and serving — unless you like lava hot sauce!

That’s it! That is all there is too it! 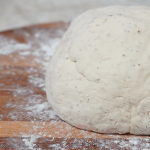 Origin of Pizza: Italian or Not?