So you just got yourself a cast iron skillet, but it desperately needs to be seasoned, and you don't have an oven, now what?

How do you season cast iron without an oven and is it even possible?

While an oven is an ideal way to put a solid seasoning on your skillet, as it gives you temperature control and evenly heats the iron, it's by no means the only way. Any source of heat that you have some degree of control over will do just fine.

Next to the oven, no controllable source of heat is more available than the stovetop.

So let's walk through the steps and learn how to season cast iron on a stove!

How to Season Cast Iron on a Stove

Properly seasoning your cast iron skillet is one of the most important components of owning and maintaining these impressive pieces of cookware.

But if you neglect your duties, your skillet will not only rust, but food will quickly begin to stick as you cook.

In a nutshell, seasoning your cast iron skillet is nothing more than bonding a layer of oil to the iron that protects it from moisture – which makes it rust – and gives it a sleek and non-stick finish.

The process of this oil transforming into a hard and slick film is called "polymerization."

So let's walk through the steps of seasoning cast iron on a stove, starting with how to prep it!

The first step to successfully seasoning your cast iron is to make sure that it is clean of anything that will get in the way of the oil bonding with the iron – such as dust, rust, or old grimy oils and grease.

The most accessible and most natural cleaning solution is simply water and salt. 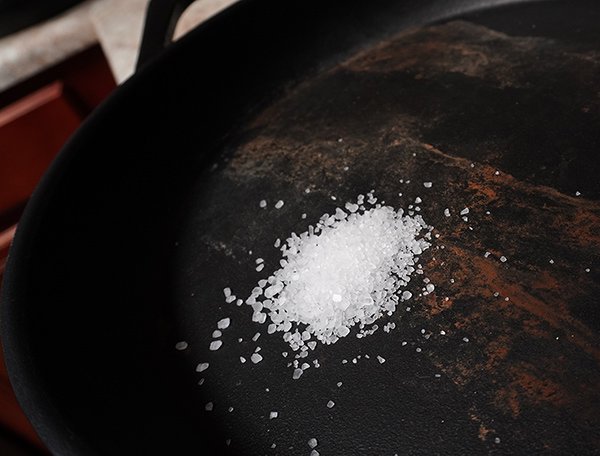 The salt acts as an abrasive substance while the water lubricates and softens the salt, keeping it from digging into your iron.

Simply apply a generous amount of salt and a little water to the inside of your cast iron skillet and, with a towel, softly scrub the skillet in a circular motion until clean.

You can also consider investing in a special chainmail scrubber that uses smooth and round stainless steel that won't scratch your iron. They are very inexpensive and will last for years!

If this is your first time using that particular skillet, consider using a little soap to help get rid of any unwanted chemicals or other nonsense that might be lingering on the pan.

However, after the initial seasoning, use soap sparingly. While not the end of the world, soap can soak into the pores of the iron and seep into your next meal.

After you have given the skillet a good scrubbing, run your fingers around the inside and ensure that everything feels clean.

Once everything looks and feels clean, it's time for what is arguably the most crucial step!

This step is VERY important! 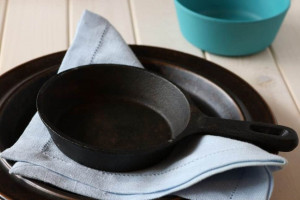 Now that your cast iron pan is clean, you need to dry it completely.

You must dry it thoroughly as you want the oil to be able to soak into the iron.

Even more so, because metal expands under heat if you use very hot water during the cleaning process, then water likely seeped deeper within the pores of the iron. If you don't get all the water out, it will mess with the seasoning process as water and oil don't mix well.

To properly and fully dry your pan, simply wipe it dry with a towel, place it on the stovetop, and turn the heat up to medium!

Leave it on the stove for about 5 - 10 minutes and let the heat further expand the iron and evaporate all the remaining moisture!

Now turn the heat off and let your skillet cool for a minute or two – but not too much as you want to apply the oil while it is still relatively hot and the iron pores are still open.

Step 3: Oiling Your Cast Iron for the Stovetop

So your cast iron skillet is now clean, dry, and still slightly hot. Now it's time to start seasoning!

This is also an excellent place to cover oil briefly.  If you can, try and use something like flaxseed, grapeseed, or sunflower oil. These oils have a very high smoke point and low saturated fat content, which results in a slick and durable finish!

Do your best to stay away from oil olive. Not only does olive oil have a very low smoke point – the point at which it starts burning – but it can also degrade quickly and go rancid, which ruins your cast iron's seasoning.

We'll dive deeper into the best oils for seasoning in another article soon.

Now that you have your oil pour about a tablespoon into your cast iron pan and smear it around using a towel. Make sure to coat the entire inside – bottom and sides.

Continue to rub it in until it begins to look like it's "soaking in."

Next, grab another clean towel and wipe all of the oil off until all that is left is a very thin layer! If you leave too much oil in the cast iron, it will pool up and form dark and sticky spots. So wipe it down well!

Now that it's oiled up, it's time to season!

Step 4: Seasoning Your Cast Iron on the Stove

Now because we are using a stovetop, the cast iron is going to heat from the bottom up. If the bottom heats up significantly faster than the top, the result is going to be an uneven season – or uneven polymerization.

We don't want this to happen.

So to battle this, we are going to apply heat gradually.

Begin by placing your cast iron skillet on the stove and turning the burner to low - medium. After a few minutes – or when the skillet is hot to the touch – turn the heat up to medium-high. This will typically bring your temperature up to about 330 - 350 degrees F.

Leave it on medium-high heat until the oil begins to smoke slightly.

Turn the heat off and let the pan cool for about 10 minutes!

Congratulations on your newly seasoned pan!

For the best results, repeat the process of oiling and seasoning your cast iron several times. The more coats of oil that you let polymerization, the more protected your iron will be, and the less food will stick!

Step 5: Finishing it off! 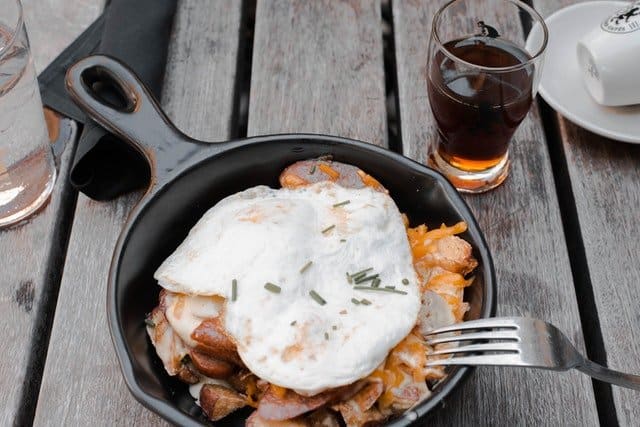 During a standard oven-style seasoning, you would typically rub the entire pan down with oil; however, a stovetop doesn't allow you to season the outside. But if you want to be extra proactive in preserving the overall quality of your cast iron pan, consider seasoning the outside and handle.

This can be done via stovetop by simply repeating steps 3 and 4, but this time flipping and cooking the pan upside-down so that the bottom is facing up! This will keep the heat off the oil and allow the pan to heat evenly from the inside out!

That should about do it!

Remember always to be patient with your cast iron, and if you take care of it well, it will serve you for the rest of your life!

3 Ways to Clean Black Residue Off a Cast Iron Skillet

How to Use Cast Iron on a Glass-Top Stove