Hydnum repandum is the most well-known species of hedgehog mushrooms and is nicknamed sweet tooth or the wood hedgehog.

Though they might not stand out with their coloring, hedgehog mushrooms are popular due to their unique tooth-like spines instead of gills and the fact they are edible.

The spines inspired the mushroom’s name due to their resemblance to hedgehog quills and can help with easy identification.

This guide covers how to identify Hydnum repandum, ways to tell it apart from lookalikes, and some tips for eating it.

How to Identify Hydnum Repandum

Hedgehog mushrooms are arguably one of the easiest mushrooms to identify because of their spines.

The cap is usually a mix of light to golden brown with hints of yellow and orange.

The cap colors will darken as they age, as many other mushrooms do.

The cap shape can start somewhat convex but grow to be depressed.

The margins will get wavier and often split with age.

This mushroom has spines on the underside of the cap where gills would be.

These can also be referred to as teeth and will be lighter colored than the cap.

The colors of the spines are whitish cream to tan. 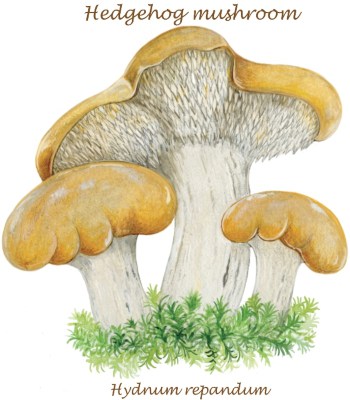 Stem coloring will often be white but can have spots that are a similar color to the cap.

Spore distribution is similar to a gilled mushroom, but they are released through the spines.

The spore print is pale cream.

Hydnum repandun is specifically a European species and is found broadly throughout parts of it.

This mushroom can be found alone or in groups, mostly in coniferous or deciduous woodlands.

They can be found hiding in moss and grass near spruce, birch, beech, and pine trees.

Species found in North America are not likely H. repandum, but this Latin name is used as a general identifier when unidentifiable.

In the west, they are often found near conifers and oaks in pathway-like strings around the trees.

The season for H. repandum is mid-summer to fall while the North American species similar can be found earlier in the Eastern US and later in the Western US.

If you find a mushroom with a somewhat defined circular cap and the “quill gills” underneath, it is likely a hedgehog mushroom part of the Hydnum genus.

The issue is that many of these species are so close they are often just called Hydnum repandum when they may differ genetically.

However, for now, it is not a huge deal to call one of these close species H. repandum because it can be impossible to know or tell them apart yet.

Here are some of the species closest to Hydnum repandum, but that do have actual distinguishable features.

Here is a source for somewhat recent research on newly discovered Hydnum species.

A way to differentiate H. repandum from some of its similar species is to check for decurrent spines. Decurrent refers to the spines running down the stipe of the mushroom.

All of these listed mushrooms are edible.

There is not too much to worry about when foraging hedgehog mushrooms because if it has the basic features, it is usually safe.

However, there are some good and bad mushrooms outside of the Hydnum genus that can be mistaken for a hedgehog by beginners.

The lookalike you wouldn’t be sad to mistake one for is a chanterelle. There is a variety of chanterelles that are highly sought after for their choice edibility.

Hedgehogs can grow in similar places as chanterelles, so it is possible you might encounter these while foraging for those.

Chanterelles will have attached, forked, almost waxy-looking gills that differ highly from the hedgehog.

From above, hedgehogs can be mistaken as some species of Chanterelle can have very similar coloring, size and cap shape.

Jack O’Lantern mushrooms are poisonous can be mistaken for hedgehog or chanterelle mushrooms.

The common species of Jack O’lanterns are Omphalotus olearius and O. illudens and look pretty similar to each other.

However, the thin gills will give them away as they are straight, attached, and non-forking.

If you stick around at night, you may even be able to see the gills faintly glow. Yes, it is true they actually glow!

Like I have previously stated, a quick check of the gills should be an easy way to tell all these apart, but it is still good to have a heads up.

Always remember to consult an expert before consuming any wild foraged mushrooms just to be sure.

Hedgehogs are generally easy to harvest and prepare and a great choice for beginner foraging and cooking.

Hedgehogs are good mild-tasting mushrooms. They are described as having earthy, smoky, nutty, and even apricot flavors. Younger mushrooms generally taste better and can get bitter when they are old.

Basically, the darker they are in color, the better chance they have of have some bitterness.

You can gently tap the mushroom cap to get rid of some of the debris before harvesting.

Breaking the stem of hedgehog mushrooms is relatively easy without a knife.

If you break them just above the soil, you can avoid dealing with the clumpy dirt stuck at the bottom.

Tidying them up by scraping debris off before throwing them in the basket is a good idea. 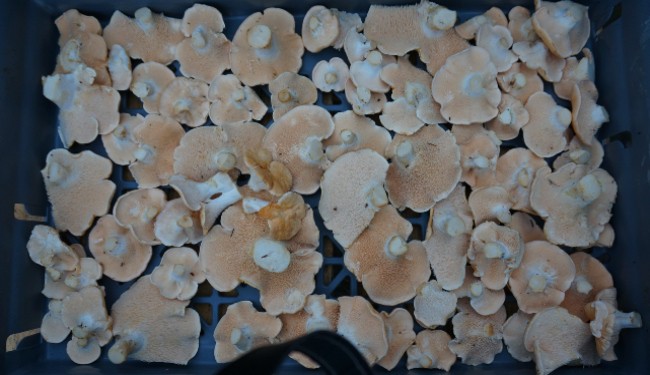 Make a note of where you find and harvest these, as they will often grow in the same spot the following year.

Cleaning starts with good carefully harvesting that avoids damaging the mushroom or getting it dirtier.

As you can imagine, the most challenging part to clean is deep up in the spines.

Rinse and rub very gently if you want to keep them intact, as these mushrooms are often brittle.

Just like many other mushrooms, these are delicious when sauteed in oil or butter.

Pairing them with grilled onions and chicken is an easy choice.

They are good in any fashion that a standard culinary mushroom would be.

The only thing different to consider is the texture of the teeth.

Removing them is hardly worth it; they will be fine in most typical dishes.

Mushrooms of the hedgehog variety can be stored in the fridge for at least two weeks.

Cook them in oil first, and once cooled, simply put them in a freezer-safe container.

They are known to freeze well while maintaining flavor and texture for at least three months.

I have not attempted to dry them but have read that it usually doesn’t go well as they become fragile and lose flavor when water is added once again.

Pickling them with vinegar and basic spices is another option and will help last slightly longer in the fridge.

Let us know how you cook and store them, and happy harvesting!