Monotub vs Dub Tub: Which Should You Use?

What is the difference between a monotub and a dub tub? This is a common question with a very simple answer.

The difference between a monotub and a dub tub is that a monotub is a single tub with a lid, while a dub tub is two tubs stacked on top of each other and used to increase the volume of the growing environment.

Now each has its benefits and disadvantages and is ideal for specific situations.

Let’s take a closer look and determine which you should use!

Note: Monotubs and dub tubs can both be used as modified or unmodified. Modified tubs are those that are altered in some way—such as cutting holes for fresh air exchange. Unmodified tubs have no alterations—no holes nor filters.

The monotub is one of the most popular fruiting chambers used by indoor mushroom cultivators today. It’s cheap, effective, and doesn’t require a ton of space nor special humidity or ventilation equipment. It’s a self-regulating environment that can be used to grow a variety of mushrooms, including Oyster, Reishi, and Shaggy Mane.

They can also be easily created using any container you wish, however, the popular choice are large plastic totes—such as the Sterilite 80 Qt. Gasket Box. 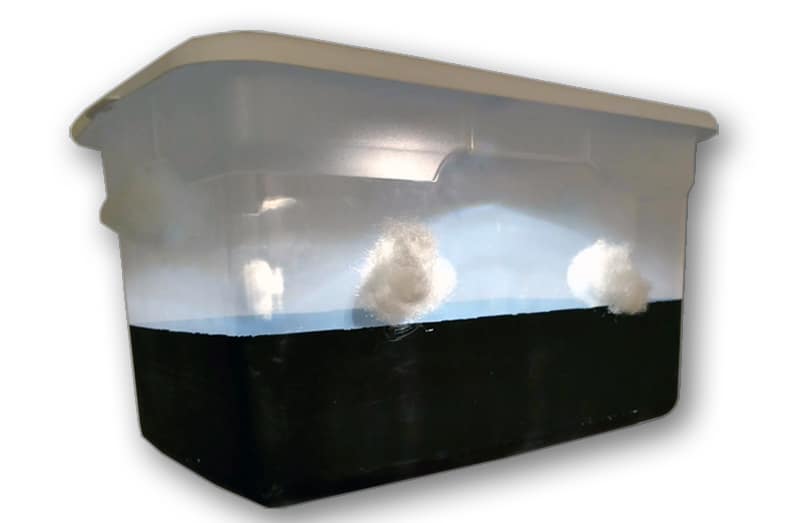 There are a couple of pretty cool benefits that the monotub has over the dub tub. The first is that it is cheaper. With a monotub, you are only using one container with a lid, while a dub tub requires two containers—naturally costing twice the price. Plastic totes can sometimes be expensive so if you’re on a budget the monotub might be your huckleberry.

The second benefit is that the monotub takes up less space and is stackable. This is nice when you’re setting up your grow area in a small space such as a closet or tiny room.

Now for the drawbacks. Because the monotub is half the size of the dub tub, it also has half the volume. This can be a problem when using smaller containers as your mushrooms might not have the vertical space required to grow before smashing into the lid of your container.

However, the greater concern is your growing climate. Monotubs can provide an excellent climate for mushrooms to thrive, however, because there is less space in a single tub, you’re growing environments —such as humidity and fresh air exchange— take more effort and attention to control.

Failing to balance these environmental variables can cause your mushroom’s growth to slow or even abort—stop growing completely. It can also cause other issues, such as fuzzy feet. You can mitigate this drawback by modifying your tub with FAE holes to help self-regulate your growing environment. But to be honest, increasing the volume of your environment is the easier path.

Okay, so the dub tub is a little more interesting and is nothing more than two containers stacked on top of each other to create one larger container.

They are typically used when growing with smaller containers such as shoebox totes or in locations with extremely low humidity. 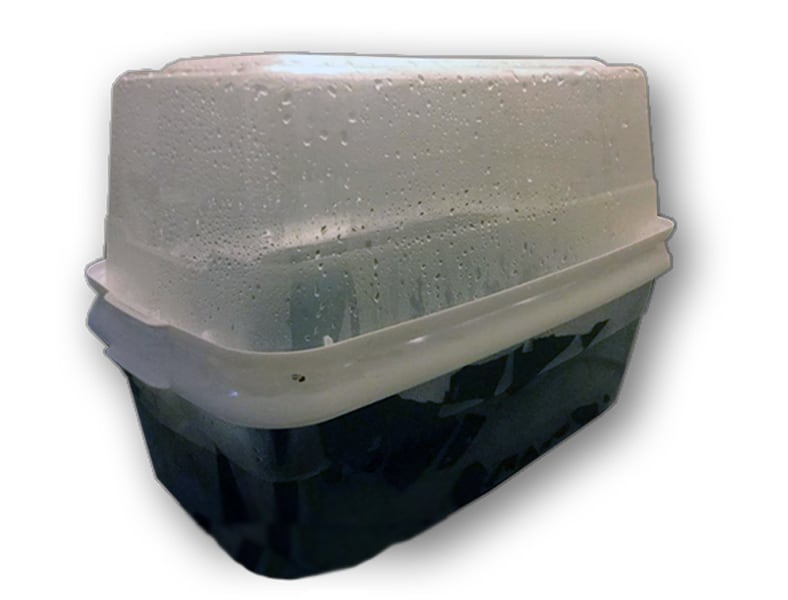 The primary benefit of the dub tub is the extra vertical height that you gain from the second tub. A common problem that many new growers run into is that their mushrooms sometimes outgrow their containers and smash into the top of the tub.

This typically isn’t a bad thing as most times your mushrooms will start curving off to the side and intertwine with each other. In this case, the worst thing you’ll have to deal with is a harder time harvesting. However, sometimes mushrooms are strong enough to lift the lid off of your tub completely, making it difficult to continue controlling the environment.

The next awesome benefit of the dub tub is that it requires less attention. Because you have doubled the volume, you have also doubled climate. While it may not seem like a lot, this increase can dramatically reduce the need to open them up for fresh air exchange.

This can also save your sanity if you live in an area of low humidity. Every time you open your tub, you lose precious moisture and if you can reduce how often you need to exchange air you can ensure that your humidity will remain at its peak.

Dub tubs also help lower your chances of contamination as you’re not exposing them to as much fresh air as you would when opening the top of a monotub.

The drawbacks of the dub tub are pretty simple. Because you are using twice the containers, your setup will cost twice as much. You’re also going to take up a TON more room and while you can stack dub tubs, it’s a little sketchy.

Which Should You Use

You really can’t go wrong with either, however, there are a few considerations that could lean you in one direction or another.

If you’re on a budget, don’t have a ton of room, or live in a location with humidity above 40%, a monotub will work for you just fine and will provide a little more hands-on experience and teach you a lot more.

However, if you live in a place of extremely low humidity or want something that you can kind of set and forget, I would recommend trying out the dub tub.

And if you are still not quite sure, try both and see what you like. While there is an art and science to growing mushrooms, much of it is personal preference, so never be afraid that one decision will lead to failure.

I hope this little guide helped you out and if you have any questions or would like to see any particular content on cultivating mushroom, be sure to throw a comment in the section below.