How to Blink SOS in Morse Code

In 1966, prisoner of war and Navy pilot Jeremiah Denton used Morse code blinking to communicate to the US that the North Vietnamese were torturing him. Not only did he save his own life, but he communicated his message through the simple act of blinking.

The fact is, the world is a crazy place, and you never know what bizarre and seemingly impossible situations you might find yourself in one day.

Among many other reasons to learn Morse code, having the ability to communicate even a few words without speaking could easily be the difference between life and death.

This guide aims to teach you how to blink Morse code for SOS and provide you with a few methods of furthering your Morse code blinking skills! At the end you’ll understand why learning Morse code is still important today!

How to Blink in Morse Code 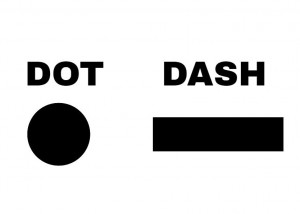 The dots are symbolized by periods and represent a quick and rapid signal.

On the other hand, dashes are longer, are symbolized by a hyphen, and represent a slow signal.

When it comes to Morse code blinking, these dots and dashes are represented in a very simple way—time spent blinking.

Blinking in Morse Code – The Dot

Signaling a dot in Morse code is as simple as blinking your eyes as quickly as you can.

Check out our good buddy Rocky below and follow him as he signals an “S” with three quick blinks.

Blinking in Morse Code – The Dash

Signaling a dash in Morse code is as simple as blinking your eyes with a little 1-second pause.

Follow along with Rocky below and signal an “O” with three extended blinks.

How to Blink SOS

Alright, now that we know how to blink our dots and dashes, let’s throw it all together and blink SOS in Morse code.

You want to make the pause between the letters the same length as your dash blinks—typically about 1 second.

How to Learn Morse Code Blinking

If you want to take your skills to the next level and learn how to blink Morse code like it’s your first language, you’ll need to be somewhat proficient in the skill itself.

Focusing on blinking while at the same time attempting to translate your thoughts into dots and dashes is no easy task. However, learning the basics of Morse code and spending a couple of hours a week practicing is an easy way to improve your blinking proficiency.

But there are some other methods that you can use to expedite the learning process further. Additionally, you can practice using a flashlight to blink Morse code.

The first method is practicing your Morse code blinking with a friend!

Find anyone you know who has the same burning desire to learn Morse code as you do and practice blinking messages to one another.

This is a great way to practice and gives you both the ability to communicate with one another without anyone else in the room being aware.

If you don’t have any friends who want to learn Morse code, there is an alternative.

Find and join some Morse code or survival discussion boards—such as forums, Facebook groups, or subreddits—and ask around if anyone would like to practice blinking Morse code.

Then send each other videos of each other blinking messages. Nothing like blinking pen pals!

If the above options have failed you, fret not! I’ve got one more trick in the hat that doesn’t even require a partner! In this method, write out a dozen words or short phrases on a piece of paper, and one after another, record your own face as your blink out the Morse code for each one.

Be certain to record separate videos for each word or phrase as we want to shuffle each video like a deck of flashcards. Next, watch your videos in a random order trying to interpret what you are blinking.

Now, at first, this method will start slow as it won’t take you very long to make it through your first set of video flashcards; however, as you continue to add more videos, it will become much harder.

While you won’t learn as fast as you would conversing with another human off-script, flashcards are a proven way to refine and reinforce your Morse code!