20 Wild Nerf Facts You Should Know

Everyone has heard of the massive toy company Nerf, and there are few that haven't felt the gentle sting of the dart guns they produce. Well, it turns out there are a ton of interesting facts about Nerf and its history that will amaze you.

Here are 20 wild facts you should know about Nerf!

You may not have known that NERF is an acronym that stands for Non-Expanding Recreational Foam. The term "nerf" may have started in racing, where it was the word for lightly bumping a car to get inside their head or letting them know you are there.

These days the word is generally slang used to describe reducing the damage of something. 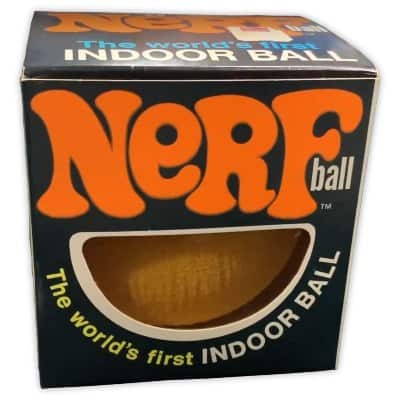 In 1969 Nerf launched what they deemed "The World's First Indoor Ball" that was advertised with the message, "Throw it indoors; you can't damage lamps or break windows. You can't hurt babies or old people."

Though they are of the quality of something you would find at a dollar store these days, this ball was a hit, and millions were sold in the first year.

A few years before Nerf inventor Reyn Guyver made the Nerf indoor ball, he helped create the game Twister. He came up with the basic idea of the players being the game pieces on a polka dot map.

He took his game, which he originally called "Pretzel," to the Parker Brothers, who revised the game and renamed it "Twister." The game was released in 1967, and even though it was thought by many to be a risque game, it obviously did very well.

Nerf is owned by Hasbro, a multi-billion dollar company and one of the biggest names in toys. Nerf is still one of its powerhouse sellers, with an estimated $400 million-plus yearly revenue.

Nerf is one of the most valuable toy brands competing with the likes of other household names like Barbie and Hot Wheels. The only other toy brand that really blows them out of the water is LEGO, with an estimated $8 Billion a year in revenue. 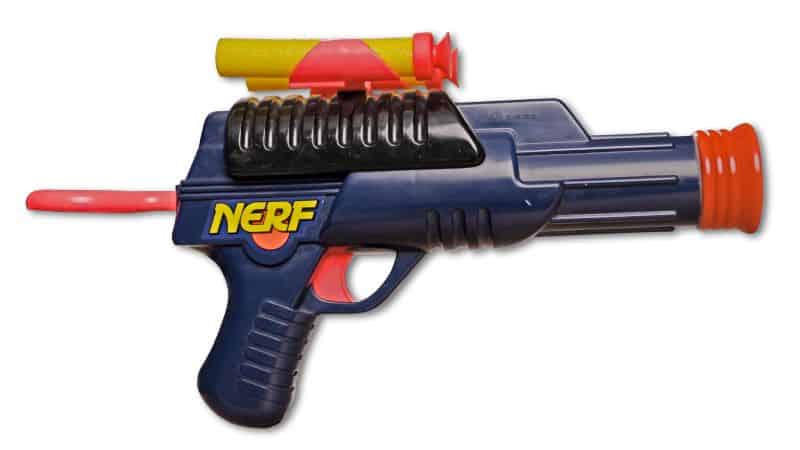 The Nerf company may have been formed in the 1960s, but it didn't start making foam dart guns until the 1990s. They made the Bow N' Arrow dart bow and the Blast-a-Ball blasters before the first gun was released in 1992.

The Sharpshooter is a front-loaded blaster that included three suction darts; yes, the ones that you would have to lick to get the darts to stick.

6. NERF produces nearly a half a billion darts annually

It has been estimated that about 455,000,000 Nerf darts are made each year. Someone did the math about seven years ago to help us understand how many darts that is. His math calculated there were roughly 4,007,500,000 Nerf darts made by 2015.

If you add the darts for these for the years since then we are well over 7 billion. This means we are approaching, or have passed, there being one dart for every person in the world.

7. One guy invented both the Nerf gun and the Super Soaker

Lonnie Johnson, a NASA engineer and inventor, created the first super soaker, which he originally called the "Power Drencher." His squirt gun desing was initially sold by the Larami toys corporation before Hasbro eventually purchased that company.

He later patented "a pneumatic launcher for a toy projectile" which was really the beginning of Nerf dart guns.

8. The Nerf Football was once advertised as the "Official Football of the NFL"

Hasbro used a sneaky tactic by advertising their Turbo Football as the "official football of the NFL" but with small print explaining it was the "Nerf Football League." Whether this helped sales or not is debatable, but they skyrocketed either way.

Nerf is now the official football for NFL FLAG, a non-contact flag football league for youth.

9. You could once order Nerf darts with the press of a button

Amazon used to have Dash Buttons, which were physical buttons you could buy for $5, that would auto-order certain household items. There was actually a button you could get for ordering Nerf darts.

You would just set your preference of which dart pack you wanted to auto-order, and a pack would be on the way with every press. However, all of these buttons have since been discontinued and replaced with the newer smart shelf.

10. Nerf guns are used as real gun props in movies

It should come as no surprise that when you are filming many hours a day you don't want to be carrying a heavy gun. This, and for safety reasons, is why modified and painted Nerf guns are often used as real gun props in movies and tv.

One example was the movie Terra Nova, which was criticized for using fake-looking Nerf guns when they had a $20 million budget for the film.

Michael Pick, a YouTuber and engineer, made a replica of the Nerf Longshot CS-6 that is 12 and a half feet long and weighs over 200 pounds. This is the world's largest fully functional Nerf gun and can launch one-foot darts over 250 ft.

Safety goggles would definitely not protect you from this air-powered beast.

12. You can modify Nerf guns to be crazy powerful

Many people aren't satisfied with the power of Nerf guns and raise them from the box to their full potential. It's not really that hard and with a few simple changes, you can make your cheap gun a lot better.

This is, of course, discouraged as more power equals more pain for those hit by the darts.

While you can definitely feel the sting of a dart from a name-brand NERF gun, the hardest shooting Nerf blasters come from off-brand companies.

For example, the Adventure Force Nexus and the Dart Zone Pro MK-3 both shoot 140+ FPS straight out of the box.

Nerf has been powering up their guns, as seen with the Hyper Series, with blasters that can shoot up to 110 FPS.

14. There was a professional Nerf League

Points were calculated by hitting the opposing team with a dart or capturing their flag, and the winning team took home $25,000.

The speed at which Nerf darts travel is normally measured in feet per second (FPS), with the average speed being around 50-70 FPS.

It gets a little crazier to think about when you convert it to miles per hour. Some stock Nerf guns can shoot at the same speed you drive on a highway.

16. The fastest firing Nerf gun can shoot 5 darts per second

How fast can you pick up darts, because it will take way more time to do that than fire them with this gun. The fastest-firing Nerf blaster, out of the box, currently is the Nerf N-Strike Elite HyperFire.

With new batteries, this motorized blaster can sling 5 darts per second. However, Hasbro unveiled the new Nerf Ultra Speed blaster that is advertised to shoot 7 darts per second, and will be released in August.

Polyester resin reacts with a compound while CO2 is simultaneously released by another reaction. It is this gas that creates open pockets within the polyurethane that, in turn, makes the material soft and light." Did you get all that?

The most expensive Nerf gun is the Max Force Manta-Ray which has sold for more than $400 still with the box. This blaster was released in 1996 and retailed for $10 at the time.

It is valuable now because it is a rare shield blaster that allows you to shoot four darts at once with one hand and two triggers. Oh, and did I forget to mention the sweet nostalgia?

If you count each unique dart skin, there are well over 100 unique ammo variants with about 20 different types. From the original yellow balls to suction darts to arrows, they have given us many ways to punish our friends and family.

The latest in Nerf ammo technology is the Hyper round, which is actually made of rubber instead of foam.

20. Nerf makes toys for cats and dogs too!

You may not know that there are a good amount of Nerf dog toys on the market and even a few for cats.

For dogs, they make frisbees, footballs, discs, and even ducks. For your feline friends, Nerf makes scratching posts and even a blaster that fires catnip!

We hope you enjoyed these Nerf facts! Be sure to check out our other Nerf guides for reviews on the best guns and other entertaining Nerf tips!