The Daily Dabble / Skills & Hobbies / Nerf Guns / Nerf Grenades: The Best Ones and What you Should Know

Are you sick of getting defeated in Nerf wars by being outgunned or simply because you can't shoot straight? Well, Nerf grenades may be just the thing you have been looking for.

Grenades might not be the most effective weapon in a Nerf battle but they are fun and have an intimidation factor that screams, "I'm crazy and willing to end us all before I lose".

There is no official Nerf brand grenade but there are a few toy grenades that are generally used with Nerf ammo.

The best Nerf grenade you can buy is the T238 Grenade V2 made by FenglinTech. It is the best one out now because it doesn't have to be thrown to set off and also has an adjustable delay timer. It is more reliable than other grenades because it can be rolled or set down, after pulling the pin, and will consistently fire.

In this article we will cover how Nerf grenades work, the best buying options, and if it's worth trying to make your own.

Here are the best Nerf grenades! 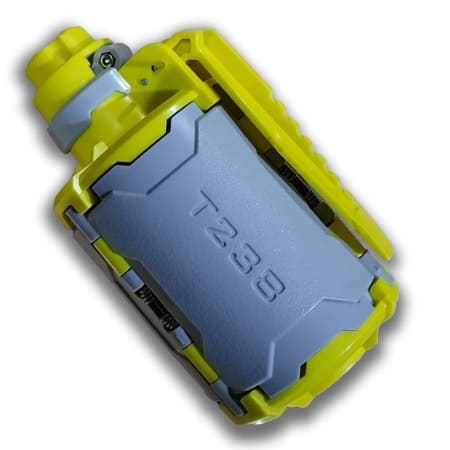 The FenglinTech Grenade V2 is the cream of the crop when it comes to Nerf grenades.  It has a pop-up design that starts to trigger when the pin is pulled and the lever is released.

The easy loading is also a big pro as you don't have to hold it shut while loading. The top will pop up enough, while the compartments are closed, so that you can load it from the top.

One important thing to note is that when thrown or rolled, one of the compartments is going to be aimed straight at the ground.

This is where the delay timer comes in handy on this grenade. With the T238, you can pull the pin, set it down straight, and still have time to get away before it goes off.

Doing this will allow all the compartments to open freely and launch ammo in three directions.

You can also get it to go off in the air before if you time your throw correctly.

The timer is adjusted by tightening or loosening the Allen head screw.

My only real complaint is that this Nerf grenade is a bit pricy. 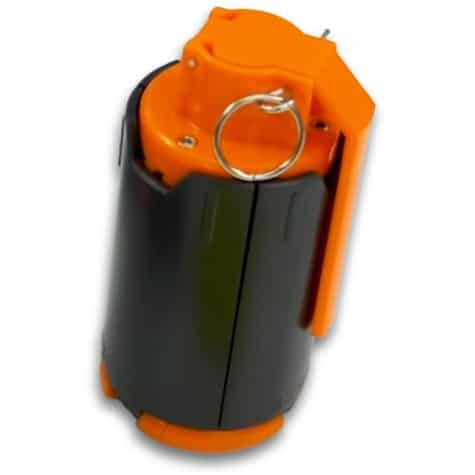 The Aevdor CS-Grenade is great for a quick strike as it explodes on impact leaving little time to duck and cover.

The best way to use this grenade is to toss it so that it lands straight up and down. If lands on one of its sides, one compartment will be directed at the ground which makes the ammo inside of it useless.

This more affordable Nerf grenade option works well with the only real issue being it can be bit touchy to load it as it doesn't always catch right when closing.

On a side note, this same grenade model, MKIII, is sold under other brand names like Ruibytree and Fenglintech as well.

Ruibytree sells a smoke grenade skinned version and you can also get a see-through FenglinTech version.

Nerf grenades aren't too difficult to figure out but some designs are a little more reliable than others.

Safety Note: Nerf grenades themselves are not soft in any way, so you should never throw one directly at someone. Though it will likely end a Nerf war, hitting someone directly with one can cause injury.

How to Load a Nerf Grenade

When loading a Nerf grenade there are a few ways to do it depending on the model.

If you stuff too much ammo in this grenade, the latches will not be able to close fully and it will just go off when you stop holding it shut.

For both grenade models, cutting old darts in half or using short darts will allow you to fit more in.

How to Make a Nerf Grenade

I am gonna say it right up front, that there is no real great way to make a homemade Nerf grenade that is effective. At least there is no way to do it for much cheaper than just buying one.

If you need more proof check out this video from the YouTube channel Beret, where he tests most of the DIY Nerf grenade ideas out there.

The only cheap way that kind of works is putting a rubber band around the end of a bundle of Nerf darts and tossing them.

If you get lucky the rubber band will fly off and release the Nerf darts, but it is a very inconsistent method.

While Nerf grenades are fun and entertaining to play with, they aren't super-efficient. In close quarters they will work great but are mostly great for scare tactics or clearing a small area.

They are actually designed to work better for airsoft or CQ blasters (Gel blasters). This may be why there isn't an official Nerf brand grenade yet.

That said, if you have some old darts you can cut up or just use rival or hyper rounds, these grenades can really be fun to use.

Thanks for reading, and Happy Nerfing!

20 Wild Nerf Facts You Should Know