There’s nothing quite like a Nerf war to bring friends and family together for some healthy competition. However, just having a plain shootout or an exchange of surprise attacks can get old.

It’s time to add some spunk to your foam-flinging battles and see who is the best with a series of Nerf games.

While most of these are designed for rowdy and rambunctious play, there are also some with a calmer, and even a learning intent.

Here are 15 Nerf war game ideas to try out with friends and family!

The most common game to enjoy with Nerf is Capture the Flag. Players are divided into two teams in an area with established boundaries.

Each team has a unique flag in a similar location near the back of their half of the playing area. Players try to capture the opposing colored flag and return it to where theirs is located.

When a player is hit by a dart they must return to the back of their own area before they can shoot or go for the flag again. The first team to successfully capture a flag wins the game or round. 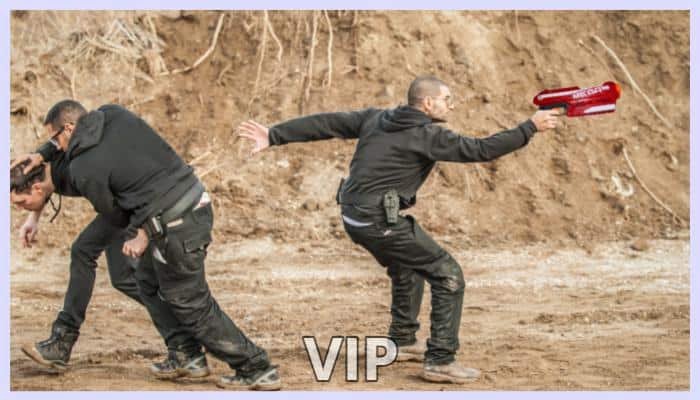 In VIP, each team picks one person as their “Very Important Person” who will be defended in the game. This is a fun one because players can jump in the way of the darts to protect them in a bodyguard roleplay scenario.

When players get hit they can either be out for the round or have to go to a certain area to reset or respawn. The goal is to hit the opposing team’s VIP first.

Best played with teams of a few or more, the classic freeze tag is a blast with Nerf. If you are not familiar, teams fire at each other, and a player is frozen if they are hit by an opposing team’s dart.

A frozen player cannot shoot and their teammates can unfreeze them only by shooting them with a dart. One team is crowned as the victor when they have frozen all the players of the other team.

The idea seems simple but it can be a fast-paced shootout with rounds that end quickly. 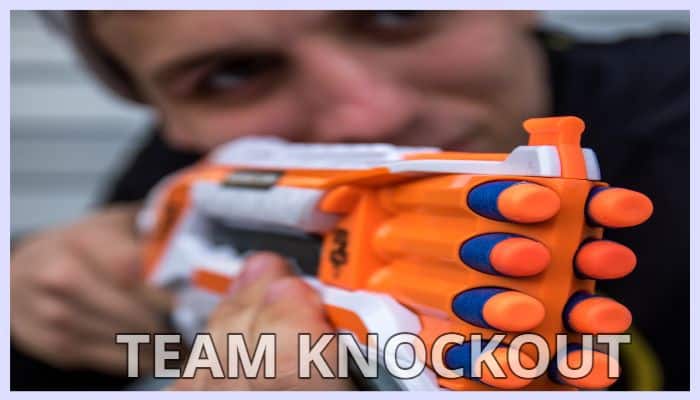 One of the most basic Nerf gun games is Team Knockout or Deathmatch. It applies the most basic rules of dividing teams evenly and deciding on the boundaries.

Players can have a certain amount of times they can be hit before they are knocked out of the game, or by just one hit. A team wins when they have eliminated all the players on the opposite team from the game.

You can add some depth to this game by designating a certain type of Nerf gun for each player on the team. For example, if there are three players on each team, one player can have a big gun, one has a pistol, and one has a shotgun.

These additional rules of course can depend on how many players and the selection of blasters to choose from. 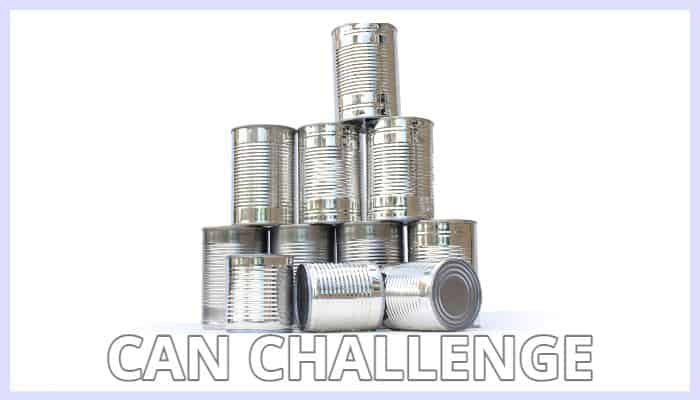 The Can Challenge is a bit of a calmer game that involves setting up some aluminum or tin cans on a smooth surface. It can depend on how many empty cans you have ready, but a basic 10 stack is ideal, with four on the bottom, then three, two, and one.

Players take turns from a set distance to see how many darts it takes them to knock them all off. Count the number of darts fired for each person, and the one who took the least amount wins. 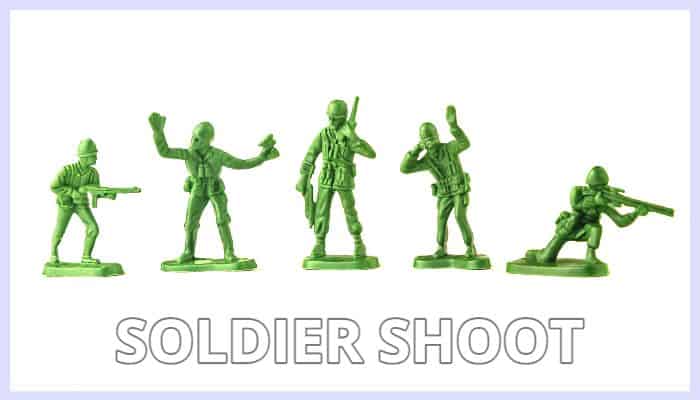 Looking for another Nerf game that doesn’t require shooting each other with foam? Soldier shootout involves setting up toy soldiers around the house or outside in a specified area for target practice.

This can be a moving shooting range-style game or a fixed one in a specific area. The simplest and cheapest toys to set up and shoot are plastic toy soldiers.

Participants can move together to shoot the targets, or take turns with a specific number of darts to see who can knock the most down. 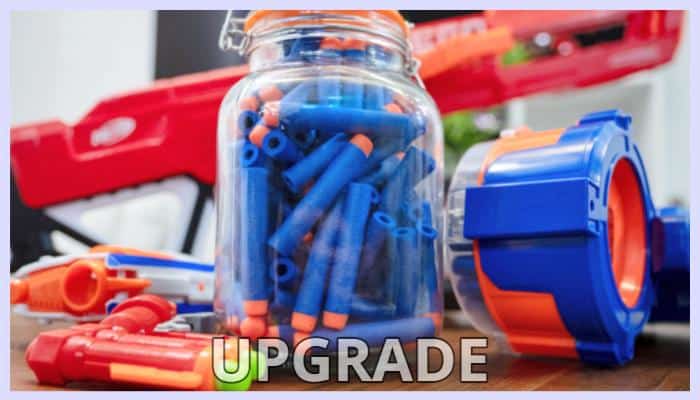 The Nerf game Upgrade also referred to as “Gun Game”, rewards the person with the most shots hit the fastest. It should be noted that this game either requires a pile of Nerf guns or ones that can be upgraded with attachments.

This free for all game starts with small guns but when a player hits someone else they get to choose an upgrade. There can either be a 15-second pause for the person to upgrade and reset, or it can be a wild, fast-as-you-can, event.

Have a table of bigger blasters or attachments, such as a grip or a bigger magazine to choose from. Note, that the cache of weapons and upgrades should be in a safe zone where the person upgrading can’t be shot at.

Another simpler version is for each player to have a few blasters they can hold or carry at once. The first player to get a hit with each blaster wins. 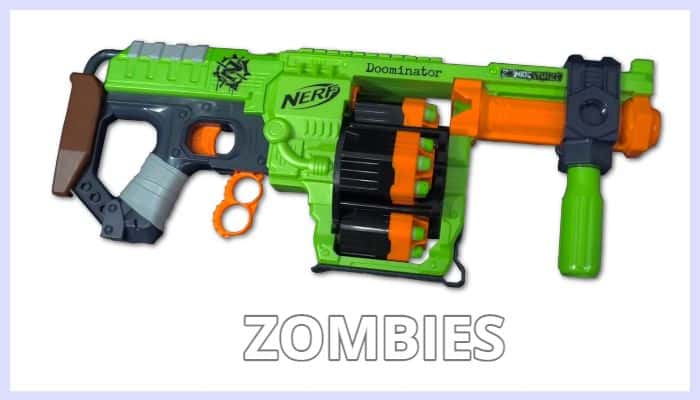 When a human is tagged they have to drop their gun and join the horde of Zombies. To make it fairer for the zombies, the ammo can be limited, with the humans not allowed to pick any up.

The last person standing is the lone survivor winner and different players can start as zombies in the next round. To spice this up for a big party like a birthday, check out the best Zombie Strike Nerf guns, a series of blasters made specifically for this type of fun. 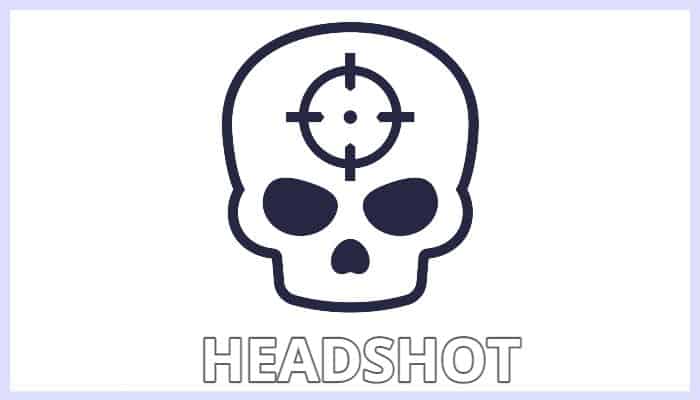 Headshot is a game that definitely requires head and eye protection, and may be better for older players. The game is exactly what the name implies, getting headshots.

Players are either eliminated when they get hit in the head or just tally up the number of headshots they get. Headshot can be played as a free for all game or with teams.

For extra safety with younger children, this can be changed to focus on an arm or a leg instead of the head. 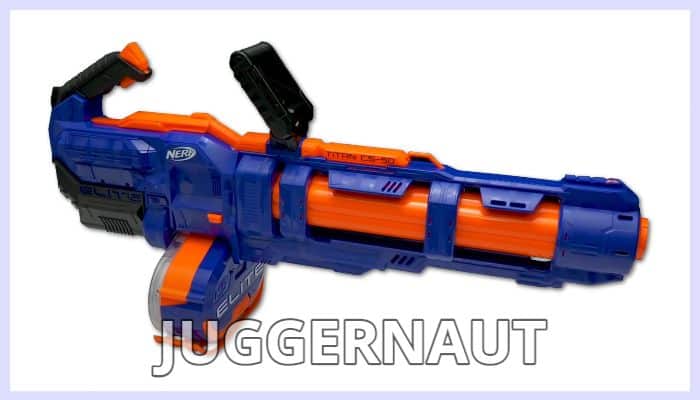 This game requires a few players with one that has a bit of an advantage. One player is the juggernaut and can have a powerful Nerf gun as well as more lives.

Each person should get a chance at being the juggernaut with the winner being the person that knocked out the most players or with the most remaining lives. 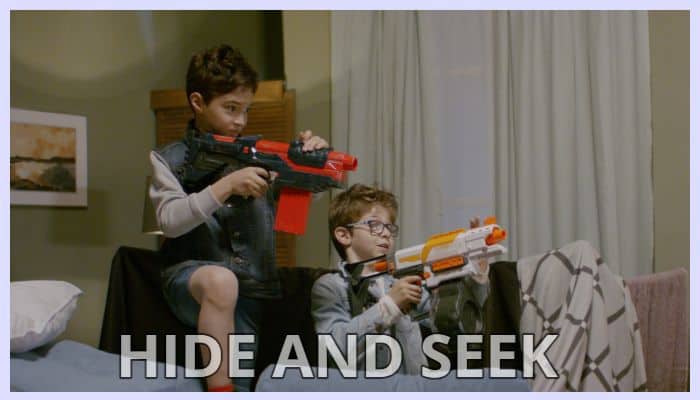 Hide and Seek with Nerf guns is played in a variety of ways. The most basic theory is that both the people hiding and seeking have Nerf guns.

The seekers count to give the hiders a minute to hide and then go on the hunt. The goal is that a shootout commences when a hider is found to see who can hit who first.

Alternatively, this game can be played with the seeker having no gun but trying to tag the hider before being pelted with foam.

Picture yourself in the streets of an old west town witnessing a shootout, but Nerf guns are pulled instead. Have two participants stand back to back and take steps, counted aloud, before they turn and see who can blast the other first.

This could be played with teams, one being the outlaws and one the sheriffs, or by singly taking turns. Another option is to stand 20-30 feet away from each other with a designated caller yelling “draw.”

A Nerf revolver or pistol would be ideal for this wild west-themed game, but not necessary of course. 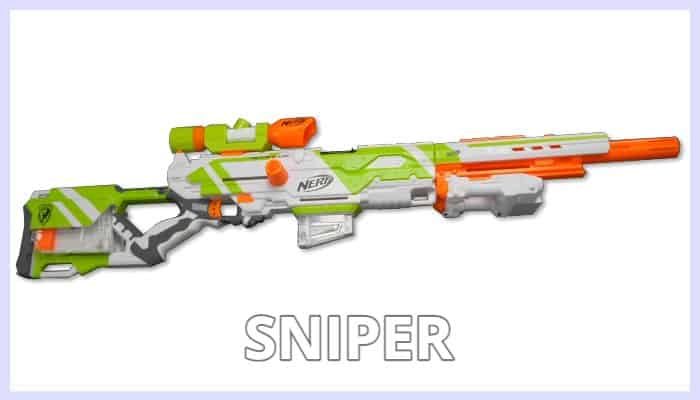 The basic rules of sniper are that one player is set up stationery, ready to take aim at other players. Divide the area of play in half similar to a dodgeball game.

This sniper is on their own team and the remaining players have to run horizontally from end to end on their own side. The sniper tries to shoot them as they run back and forth.

The shooter gets one point for anything below the waist, two for the above the waist, and three for a headshot. The runners get a point every time they make it across without getting hit but are eliminated when they do.

Choosing the next sniper can be based on the runner with the most points or by just taking turns. After everyone has had a chance to shoot, add up the total points to see who won.

This game can be a little bit cooler if you actually have a Nerf sniper, but any blaster with a decent range should work. 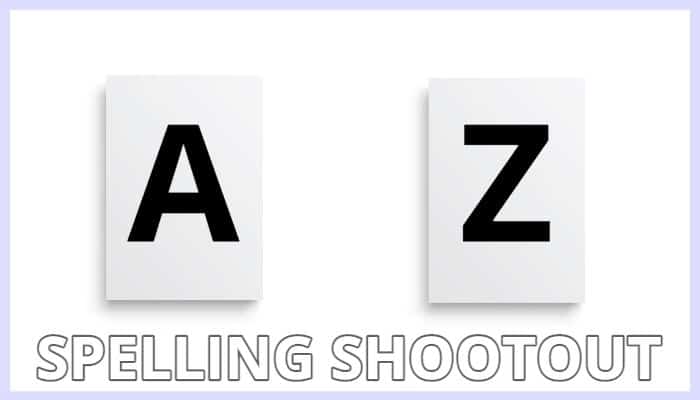 Spelling Shootout can be a great way to integrate some learning with some quality fun. This will take a few minutes of preparation but is something you can reuse.

You will need 26 pieces of paper with one of each of the letters of the Alphabet. Tape them on a board or wall evenly, and in order so they are easy to see.

While this will likely be more entertaining for a younger age group, shooting from further away, or using harder words, could be fun for teens. You can accomplish this in a classroom setting by writing the letters on the board, each inside a decent-sized corresponding square. 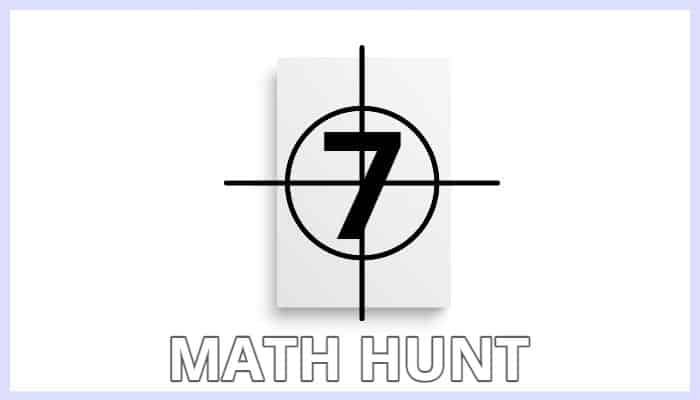 Math Hunt can be played in a similar manner to the spelling hunt. Simply make squares on a board or put papers on the wall with the numbers 1-10. If there are multiple kids playing you can have them take turns shooting two or three numbers and have another participant give an answer.

These numbers can be added or multiplied, with the optional choice of adding the plus and times squares to the target area. For older players, multiple numbers can be shot and combined to make harder equations, and division can be introduced.

Hopefully these Nerf game ideas help spark some good creativity and fun. I am positive these games can be made much better with some tweaks and changes to better suit the number of players and what equipment you have available.

If you sit down and get creative you would be surprised how many ideas for games come quickly.

Remember to practice basic Nerf safety and use protective gear as you just never know when and where that dart may strike!