We all have our own personal caffeine experiments daily as we sip on our coffee, tea, and soda just waiting for that sweet nectar to do its magic.

While the benefits of caffeine are well-known, something a little less known is that there have been some crazy experiments done with caffeine on both humans and animals.

Check out these five wild caffeine experiments that will drop your jaw and help you learn a little more about the world’s favorite stimulant!

An experiment aimed at studying the effects of caffeine on exercise, at Northumbria University, almost turned deadly when students were mistakenly given 100 times the dose intended.

They were given 30 grams of caffeine instead of the 0.3 grams that were planned for the experiment.

This awful mistake led to each student consuming the caffeine amount equivalent to about 300 cups of coffee or 270 12-ounce Red Bulls.

The caffeine was taken in powdered form, and these students had extreme side effects almost immediately.

Luckily both students survived after quickly being rushed to the hospital.

They had to receive kidney dialysis to help get the caffeine out of their systems.

It is reported that the dosage calculation was made on a cell phone, where the decimal was put in the wrong place.

Both male participants made a full physical recovery even though they initially suffered some short term memory loss.

Not only should we pay attention to how much caffeine we consume, but we should also especially be careful with caffeine powders and supplements that we could mistakenly overdose with.

As if regular spiders don’t scare people enough, how do you feel about spiders on drugs?

Research was conducted on the effect of psychoactive drugs on spiders in 1948 by Peter N. Witt.

This Swiss pharmacologist tested many psychoactive drugs, including caffeine, on spiders. The goal was to see if they could change the time at which spiders build their webs — a garden spider typically cast their webs between 2 am – 5 am.

It is believed this experiment was inspired by Witt’s colleague being annoyed by the fact that spiders made their webs during that particular time.

Doses of caffeine were fed to the spiders by dissolving it in sugar water or by utilizing caffeine-infused flies. They would then press drops of this caffeinated sugar water into the mouths of the spiders. 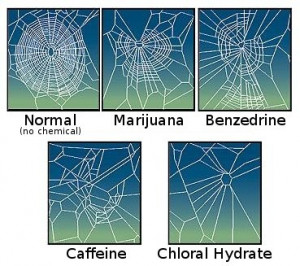 While the normal time in which the spiders constructed their webs didn’t change, caffeine was shown to significantly alter the spiders’ ability to construct their webs normally.

Small doses resulted in smaller more uneven webs, while higher doses changed the shape of the webs even more and made the design more irregular.

Perhaps the craziest discovery in this experiment was that LSD, in small doses, actually helped spiders build their webs with increased regularity.

This experiment on spiders was later reproduced in 1995 with similar results by a team at NASA.

Not everyone or everything is affected by caffeine in the same way. In fact, caffeine has been proven to be highly poisonous to many animals including: cats, dogs, and fish.

Science has proven that bees enjoy the benefits of caffeine just like people do.

She took some honeybees and trained them to harvest from two feeders of sugar water. One was just regular sugar water and the other was sugar water with caffeine.

Dr. Couvillon discovered that the bees feeding on the caffeinated feeder were way more active and loyal to their feeder.

They also were more likely to perform the “waggle dance” which is a signal to other bees that they have found a good source of food.

However, it did not actually make them more efficient workers. They kept returning to the food source after the food was gone longer than those with the decaffeinated source.

It seems that plants may have evolved to produce more caffeine in the nectar of their flowers. This gives the flower a better chance of reproducing as bees seem to choose caffeinated pollen over non-caffeinated. This even seems to be true if the pollen is of lesser quality.

While caffeine may improve the learning capability and memory of bees, it can also cause them to be less productive.

Caffeine is awesome, even in nature, but just like with the bees too much can actually have negative effects on us.

Scientists conducted an experiment to study caffeine levels in the ocean.

Then samples of water were also taken to more remote areas of the ocean.

The results were surprising as they found the remote areas had about 45 nanograms per liter, while the more populated locations had only about 9 nanograms. 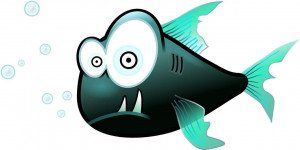 The Boston Harbour seawater was also discovered to once have 1600 nanograms per liter.

While these aren’t lethal amounts, it has been proven the caffeine causes cellular stress in some aquatic creatures.

A small study that was done on how caffeine affects goldfish found that caffeine clearly sped up the heart rate and activity of the fish introduced to caffeine.

This exposure to caffeine is believed to be the cause of disease and fatality in some of the fish.

This suggests that if our caffeine is making it into the ocean, we’re likely polluting the ocean with other contaminants that we can’t see or easily detect.

This is compared to those men who consumed 0 – 7 milligrams of caffeine a day.

As a result of this study, it is believed that caffeine, through biological mechanisms, can sometimes increase penile blood flow.

A study from the Archives of Internal Medicine backs up this theory. It showed that drinking coffee increased sexual activity in 744 participants over the age of 60.

The evidence points to the caffeine in the coffee as a promoter of arousal.

As if that wasn’t enough, another weird caffeine experiment on rats tested the theory that caffeine may place women in the mood for sex.

This study was conducted at Southwestern University in Texas.

Some female rats were given caffeine shots before mating with a male rat. Others were given nothing before a mating session.

The experiment showed the caffeinated rats were quicker to go to their male and show desire to mate again.

A caffeine aphrodisiac may help men suffering from erectile dysfunction or women who need that extra push in the bedroom!

Check out our sweet dollar bill origami design that would make a great gift for the dog lover in your life. Learn how to fold a dollar bill into a dog with this detailed tutorial.