The 3 Most Popular Vises for Lock Picking

Do you need a lock picking vise?

Well, imagine for a moment that you had another set of hands and all the amazing things you would be able to accomplish.

You could carry more groceries from the car or even pick your nose and drink a beer while playing Beethoven's 5th symphony on the drums.

Beyond having to work out four arms at the gym, life would be pretty awesome with another pair of hands.

While a lock picking vise isn't quite a second set of hands, it can, in some ways, feel like it.

So let's look at the benefits that a vise can provide, and at what point in your lock picking journey you should consider picking one up.

Then we'll polish it off with a few good options that will ensure that your first lock picking vise is the last you'll ever need!

So let's get to it and cover lock picking vises!

The 6 Benefits of a Lock Picking Vise

So what are the benefits of a lock picking vise?

Locks can't sprout legs to run away and picking locks in our hands has always worked just fine. So what can we possibly hope to gain from clamping our locks down?

To start, here are six pretty cool benefits that we can get from putting our locks in a vise!

Probably one the greatest reason pickers use vises is because it allows them to more easily use top of the keyway turning tools – such as prybars.

Top of the keyway tensioning gives us more room to maneuver our picks in the keyway and is absolutely necessary for many locks. However, it can be a real challenge to both hold a lock and reach a finger up to apply tension – especially if you have smaller hands.

By putting the lock in a vise, your tensioning finger is free to place wherever you need it.

2. Angle to Your Desire

A good lock picking vise allows you to rotate the clamp to whatever angle you want, making your picking experience much more comfortable.

This can be a godsend during a long picking session that would typically result in hand cramping or other fatigues.

3. One Less Thing to Focus On

By simply removing the task of holding the lock, you can focus more on the process of lock picking and the feedback you are receiving!

This one is kind of up for debate. Some say they don't feel feedback from their vise, while others say they do. However, every lock picker is different – from the way they use their tools to the things they focus on while picking. Not to mention people use different vises.

I myself can feel a reasonable degree of feedback if my wrist is resting on the vise. Beyond that, I typically don't feel anything else from the vise.

So your mileage may vary on this one, but it's worth considering.

A common beginner mistake is that they frequently move the lock rather than the pick.

Using a vise will stop this nasty habit and force you to leverage the most from your pick.

Lock picking is a skill of utility, and while it should never be used maliciously, picking locks in a vise better represents picking locks out in the wild.

There is a huge difference between picking a lock in your hand and one sitting in a door. They feel entirely different, and in some ways, it feels like you are completely relearning lock picking.

So if you want to be a well-rounded picker, practicing in and out of a vise is an excellent first step.

So When Should You Get a Vise?

If you are at the beginning stages of learning how to pick a lock, I would hold out and put that money towards a few more practice locks.

However, if you are at that point where you are slaughtering your locks left and right, or you are starting to play around with top of the keyway tension, then it may be a good time to throw a vise into the mix.

But honestly, you can grab a lock picking vise whenever you want. It won't hurt you as a beginner and is a welcome piece of equipment to any picker's toolbox!

There are a ton of different vises out there in the world today, so what kind of qualities should we prioritize when selecting our first lock picking vise?

When it comes to lock picking, there really are only two factors that will affect a vises usability.

1 - Swiveling Clamp: You’ll need a vise that allows you to adjust the angle of the clamp so that you can comfortably pick at any angle you want.

2 - Sturdy Base: If the base isn’t stable or heavy enough, you run the risk of the lock being too heavy, and the vise will tip over — which completely negates the purpose of the vise in the first place.

Alright, that should be about everything you need to know to go out into the world and grab a good lock picking vise.

However, if you are looking for a tried-and-true vise that will serve you well for years to come, check out the three below.

These are some of the most popular vises used by thousands of lock pickers around the world!

Probably the most well-known lock picking vise is the PanaVise 350. This is the same vise that BosnianBill uses and for a good reason. 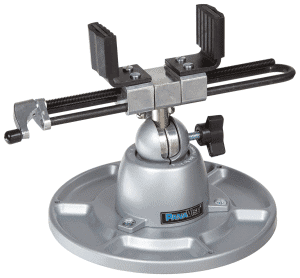 It's a very well built vise and is extremely stable due to its fat and heavy base, which includes six decent-sized trays to hold all your crap.

It also auto-centers the clamp to ensure that the weight is evenly distributed over the center of the vise!

However, one of the cooler things about this vise is that it is modular, meaning that you can take it apart and swap out pieces with newer or different components!

You can also remove the base and bolt it to the table if you are not planning on moving it!

You absolutely can not go wrong with the PanaVise 350. However, it is relatively expensive compared to the other two on this list. So if you are on a budget, I would recommend prioritizing more locks over a nicer lock picking vise!

Next up is the Yost V-275! This is an excellent little vise that is quickly becoming a favorite among many pickers due to its versatility and relatively low price tag. 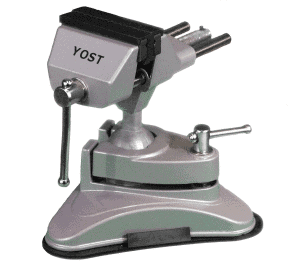 The head of the vise can rotate 360 degrees and tilt 90 degrees back, giving you plenty a wiggle room to maneuver it to a comfortable picking position! It also has a little lever that loosens the swivel, making adjustments very easy.

A cool thing about this vise is its vacuum base mount that works surprisingly well! This allows you to essentially suction cup the base to any flat and smooth surface, such as a table, desk, or countertop.

However, it's one downside is that in order to fully tilt the vise head backward, you have to position it into a cutout on the back of the vise. This can make adjusting the angle a bit of a hassle if you have the base suctioned to the table.

Overall, the Yost V-275 is an excellent choice that doesn't break the bank!

Last on our list is the Bessey BVVB! This vise is extremely similar to the Yost V-275 above in both form and function. 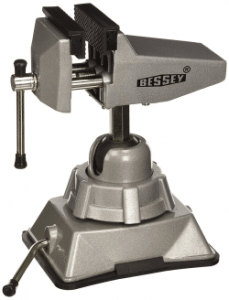 It has a vacuum base that can be mounted on any flat and smooth surface, and the head can also pivot 360 degrees and tilt 90 degrees.

However, the difference in this vise compared to the Yost is that it has a slightly smaller base, which will make it less stable if not mounted to a table.

It is also a little harder to adjust the pivot and tilt as you have to unscrew a plastic nut, which typically takes both hands.

But, it does have one little advantage over the Yost. It's slightly easier to tilt the vise head backward fully.

That being said, it's a hard battle between the Yost V-275 and the Bessey, but if both are accessible to you, I would recommend going with the Yost V-275!

In addition to providing ourselves with a new challenge, we can get a ton of pretty cool benefits from throwing our lock into a vise, and it is always nice to have that extra hand!

Remember that you don't need a lock picking vise when first starting, and it's far better to spend that money on new and more challenging locks.

However, when you begin picking more difficult locks and know that you are in lock picking for the long haul, a vise is a critical piece of equipment that will help you take your skills to the next level!

I hope this little guide cleared up any questions you may have had about using and buying vises for lock picking. If you liked this guide, have any comments or questions, be sure to throw it down in the comments below!