Entoloma hochstetteri, also known as werewere-kōkako, blue pinkgill, or sky-blue mushroom, is a medium-sized and incredibly vibrant blue mushroom found in the forests of New Zealand.

These stunning mushrooms also have ties to local lore. The story goes that the now endangered kōkako bird acquired its blue wattle (neck flap) from rubbing against entoloma hochstetteri.

This is also how the mushroom got its name werewere-kōkako (the blue wattled crow) in Māori—the language of the indigenous culture of New Zealand.

It’s currently unknown if entoloma hochstetteri, are poisonous. In fact, not much is scientifically known about these mushrooms at all.

That being said, this guide will cover everything that we currently know.

Entoloma hochstetteri is a beautiful mushroom with a unique collection of characteristics.

There is a little more to them than just being a blue mushroom.

Entoloma hochstetteri have vibrant indigo-blue color caps with a greenish tint and are also fibrillose.

They are cone-shaped and can grow up to 4cm (1.4 inches) in diameter.

Additionally, the cap margin is striate.

Entoloma hochstetteri have blue gills to match the cap and sometimes have a yellow tint.

The width between the gills ranges between 3–5 mm and the gills themselves are fairly thin.

They can reach 5cm in height and are typically .5cm thick.

They have a reddish/pink spore print.

Entoloma hochstetteri are found in the forests throughout New Zealand.

However there have been reports from India and Australia, but these variants appear more vibrant and it is still uncertain if these are the same species.

They typically fruit between January and July. 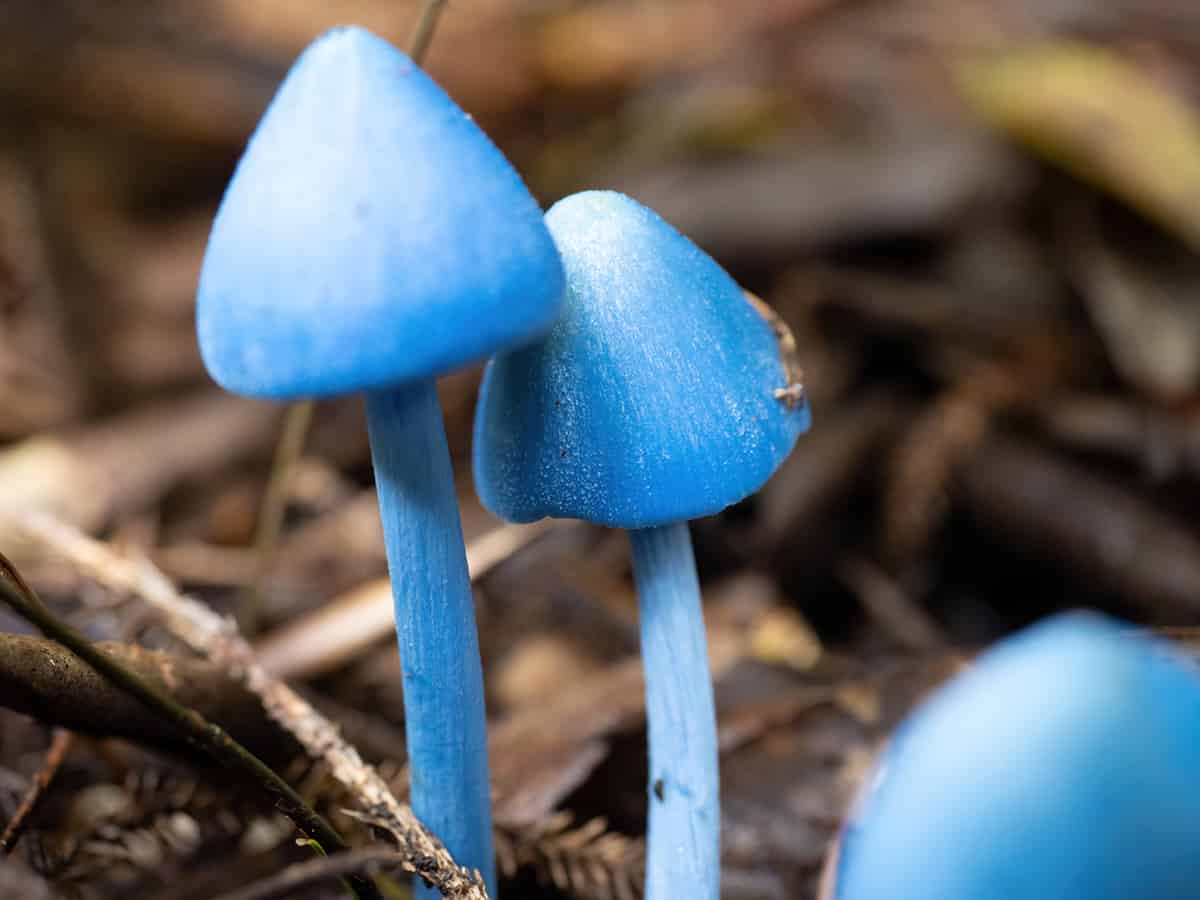 Entoloma hochstetteri are not well studied and it is currently unknown if they are poisonous or not.

There are over 10,000 known types of mushrooms. Some are too tough and chewy to eat, and some will kill you in the most painful way possible.

Until more is scientifically known about these mushrooms, please do NOT eat them.

A question about these mushrooms that is quite common is, do they have any psychedelic properties?

This is a valid question as magic mushrooms actually turn blue when cut or bruised. When the psilocin ( the psilocybin property in magic mushrooms) is exposed to the air, it oxidates and turns blue.

So could these intensely blue mushrooms be super magic shrooms? Are they the true blue meanies?

Currently, there is no evidence to support entoloma hochstetteri contain any psychedelic properties such as psilocybin.

While little is known scientifically about entoloma hochstetteri, they are a very unique mushroom and as such have gotten a little attention over the years.

Here are some cool facts about our little blue friend.

Due to the growing demand for natural food colors, food manufactures have been squandering the earth in search of an alternative blue dye.

Blue is one of the rarest colors in nature, and many hope that entoloma hochstetteri may hold the key.

Hopefully, one day soon, your blue cotton candy will be colored using mushrooms.

Only Mushroom to be Featured on Money

Entoloma hochstetteri is also the only mushroom in the world to be featured on a banknote.

If you’ve ever seen a New Zealand $50 note, you may have noticed two blue mushrooms standing tall.

The Reserve Bank of New Zealand chose to feature this mushroom because of its relationship to a local endangered bird and the lore behind it.

In 2002 werewere-kōkako was one of six mushrooms featured in a set of “fungal stamps” in New Zealand.

Mushrooms are an incredible lifeform, and werewere-kōkako is a prime example of how unique and beautiful fungi can be.

While we still don’t know much about these incredible sky-blue mushrooms, their vibrant charm and bond to local mythology make them a very unique mushroom.

However, with the recent surge of interest in mushrooms and fungi, researchers are getting more eager by the day to get them in the lab. We can only hope to learn more about them with time.