The Daily Dabble / Food & Drink / Cast Iron / When to Throw Away a Cast Iron Skillet?

One of the great benefits of cast iron skillets is its fantastic durability and lifespan.

However, like all things, cast iron cookware does have a lifespan.

So what factors affect the life span, and how do we know when to throw away a cast iron skillet?

Let's take a look at two sad circumstances in which it's time to part ways with your favorite cookware!

1. It's Cracked or has Holes 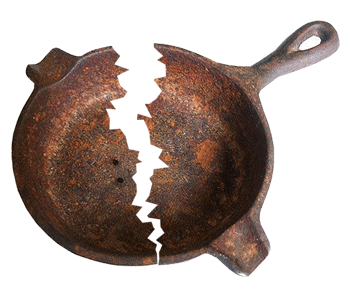 This one may be obvious, but regardless, if you have a hole or crack anywhere in your cast iron – even the handle – it's time to part ways.

Even the smallest cracks can further expand under heat and are ripe from rust.

So even if the crack seems insignificant, it's time to build your cast iron a little coffin, dig it a tiny hole, and say your goodbyes.

Warping can occur to most cookware at extremely high temperatures, and while cast iron is pretty resilient to heat, it’s still vulnerable to deforming.

However, warping isn't always a death sentence for your cast iron. It truly depends on how much it has warped, where it has warped, and how you intend to use the cookware.

For example, warping on the bottom surface of your pan is where you are going to start experiencing the most issues.

While slight warping on the bottom is okay, more significant warping can cause a ton of problems such as uneven cooking or your oil pooling up on one side of the pan – neither of which are fun to deal with.

So how can you tell if the bottom of your pan is warped?

Simply push down on one side of your skillet, and if it wobbles, then it has sadly warped. The more wobble, the more it has twisted.

This all being said, if you intend to only use your cast iron in the oven, deformation isn't that big of an issue. You'll still have oil pooling in one side of the pan – and that can be dangerous in a way – but that's the only drawback you'll experience.

Is Rust a Death Sentence?

So what about rust? Is it a valid reason to throw away your cast iron?

Restoring your cast iron from a rusty mess to a jet black and non-stick finish is just a matter of cleaning and reseasoning.

Rust is a straightforward problem to deal with and only requires a little salt, time, and elbow grease.

To wrap up, remember that even the best cast iron skillets are relatively cheap and have a significantly longer lifespan compared to other types of cookware.

But regardless, things do break, and if your cookware is showing one of these fatal signs, it is time to let it go.