The Daily Dabble / Skills & Hobbies / Lock Picking / Who is the LockPickingLawyer?

With over 3 million YouTube subscribers, the LockPickingLawyer is the most popular lock picker in the world.

He is well known for showing people the dirty little secret of the lock manufacturing world. That secret is most locks are complete junk and nothing but an illusion of security.

The LockPickingLawyer is famous for his short 2 - 3 minute videos. However, within those few minutes, he not only defeats a "security" device in a variety of ways, but he also points out the flaws and how manufacturers could make it better—that is, if they cared to.

Some people may look at what he is doing as malicious, teaching people quick ways to bypass locks.

But this isn't the case at all. The LockPickingLawyer's mission is to show the common consumer that most locks provide very little security, regardless of the claims they make on their packaging.

The fact is, the LockPickingLawyer has provided lock manufacturers with free knowledge on how to improve their products and make their customer's lives better and safer.

However, companies rarely take his feedback to improve their products, and many of the flaws that the LPL points out remain in new locks today.

This article will take a deeper dive into the LockPickingLawyer and what we know about him as an individual.

What Is the LockPickingLawyer’s Name?

The LockPickingLawyer's real first name is Harry. However, his last name, like many other personal details, is unknown.

We can verify this as his real name through a number of tweets, YouTube comments, and other social media messages.

Whether you want to call him LockPickingLawer, Harry, or even the Harry Lock Picker, his full name is reserved for those in his inner circle.

In addition to this, LockPickingLawyer also provides a P.O. box for his community to send him locks, lock picking tools, and other items. This P.O. Box is located in Damascus, Maryland, so we know he lives somewhere north of Washinton, DC.

Is the LockPickingLawyer Really a Lawyer?

The LockPickingLawyer is a real lawyer and practicing attorney in the Washington, D.C. area. However, it is unknown what type of lawyer he is.

In this LockPickingLawyer interview, he states:

The focus of my law practice has nothing to do with locks or security.

His career as an attorney definitely played a huge role in the success of his YouTube channel. One of the most useful skills a good lawyer learns is to cover a topic from every possible angle and to convey that information in a simple and understandable way.

Lockpickinglawyer's videos contain no fluff and no wasted time trying to pack extra minutes into a video for extra ad revenue. He provides a quick video of him destroying the reputation of a lock that is packed to the brim with value.

His success definitely boils down to his brevity, consistency, and the intensity with which he covers the topic at hand.

As you can see from the image below, most of his videos fall under 3 minutes. The running joke is, if the video is longer than 3 minutes, the lock might have actually put up a fight.

You'll find a better picture of bigfoot than you will the LockPickingLawyer. The only images you can find of the Lockpickinglawyer are of blurry reflections off a shiny lock.

But just like bigfoot, we do have a general idea of what he looks like. Take a look at this screenshot from a collaboration video with Bosianbill—another famous YouTube lock picker. That video can be found here. 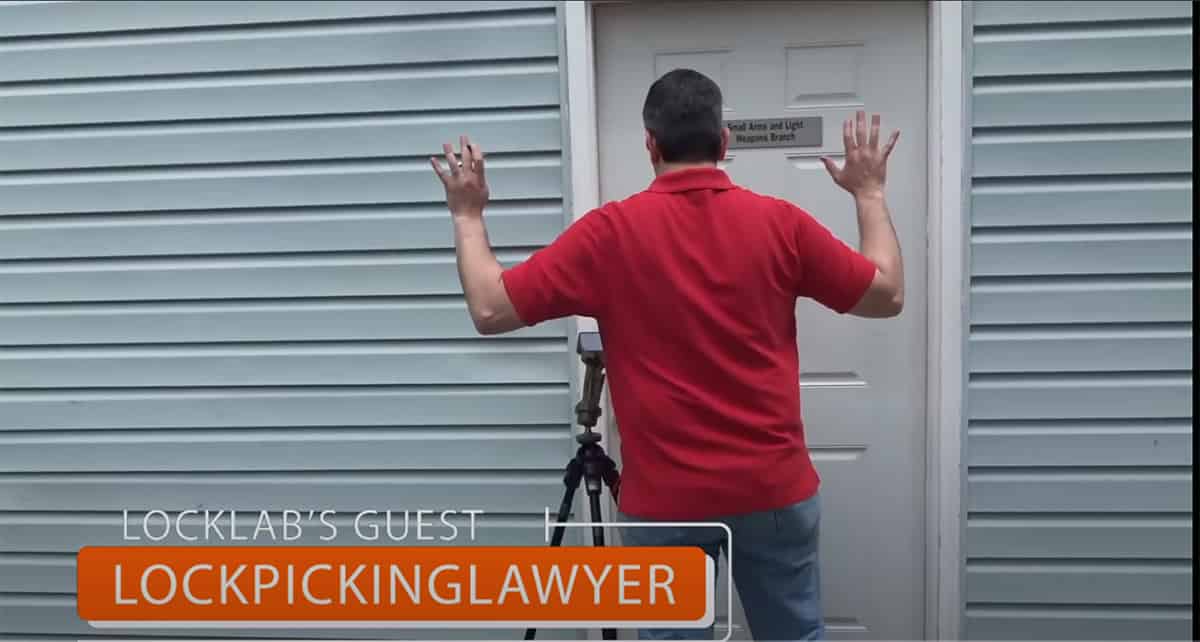 The LockPickingLawyer is fairly active within the lock picking and lock sport community. As such, contacting him is fairly easy.

You can reach him by email or mail, both of which he provides on his YouTube channel here.

For a man with over 3 million YouTube subscribers at the time of writing this, he does an excellent job of responding to emails. In the past few years, I have been able to reach him twice via email.

However, don't fully expect an email back right away as he likely receives hundreds of emails a day and is only one man.

You can also find him on these verified social media profiles:

Except for YouTube, LockPickingLawyer is not very active on other forms of social media.

The LockPickingLawyer and a couple of other experienced security experts created their own website and store called Covert Instruments.

You can find tools recommended and even designed by the LockPickingLawyer.

However, beyond physical tools, there is no training material or guides on the website.

LockPickingLawyer has released over a thousand videos since starting his channel in 2015. Among these videos are some true gems that revolutionized how we lock pickers approach locks today.

Let's look at a few of his best videos and the lessons taught in each.

Most of us that started lock picking in the early days of the craft had very few resources to learn from, and those few that we had became gospel. That gospel became what everyone taught and referenced moving forward, and nobody dared question it.

One such concept that was widely taught, but not quite true, was "to only use light tension while picking."

However, shortly after the LockPickingLawyer channel starting exploding, he released a video on tension that blew many people's minds.

The video explained how he thought people were missing out by only utilizing light tension and that heavy tension has various benefits.

For the first time, many skilled lock pickers were beginning to experience the benefits of using light and heavier tension. Many, like myself, saw their skills explode as a result.

Tight and paracentric keyways can be a real challenge for many lock pickers.

The common way to deal with restrictive keyways is to use thinner lock picks that can more easily bend through the warding.

However, the LockPickingLawyer released a video that gave us all a new approach to dealing with tight and restrictive keyways.

Rather than use thinner lock picks, why not just use a deeper pick that allows you to bypass the warding entirely? You can watch this video below.

3. Picking a Chastity Cage With a Condom Wrapper

Probably the most important video that the LockPickingLawyer has ever published is one that could someday save your life.

Using an improvised condom wrapper, LockPickingLawyer shows you how to escape a chastity case.

This truly was a public service announcement.

The LockPickingLawyer uses a variety of manufactured and homemade tools. However, in the majority of his videos, his go-to picks seem to be Peterson lock picks.

The Peterson Hook 1 seems like his favorite lock pick, but you will also see him using many different tools from different manufacturers. It's like he is trying to make a point that most quality lock picks do the job.

He and BosnianBill also created their own perfect dimple pick that Sparrow's now produce commercially called the "Disc Pick."

Who Is the LockPickingLawyer's Wife?

We don't know who the LockPickingLawyer's wife is, but we do for a fact know he has one and that she likes Ben and Jerry's ice cream.

He has made several comical videos referencing her, including my favorite, "My Wife vs. Ben & Jerry’s Ice Cream Lock."

How Much Is LockPickingLawyer Worth?

The LockPickingLawyer's net worth is not public knowledge, so we can't know for sure. However, we can use the metrics from his YouTube channel and average ad earning to get a reasonable range.

At the moment of writing this, the LockPickingLawyer has 3.3 million subscribers, 1323 videos, and 693 million video views and started his channel in 2015

Now, this is all guesswork, and, likely, we'll never truly know.

The reality is, there is a lot we can learn from the LockPickingLawyer—in business and lock picking.

He has shown us that even the most obscure skill, when mastered, can collect millions of fans.

He has also shown lock pickers around the world new approaches and techniques to lock picking that broke the old dogma of the craft and encourage new and better ways to approach locks.

And finally, he has helped show the world what lock picking is really about; developing an awareness of what security sincerely is.