For over a thousand years, cast iron has dominated the cookware industry, and is best known for its long lifespan and polished non-stick surface.

Why do many modern cast iron skillets have a rough and bubbly surface that snags food while some manufactures still produce a silky smooth surface?

Why is there a difference between manufacturers, and how should it affect your decision while buying new cast iron?

To answer these questions, let's first look at the factors that determine the smoothness during the manufacturing process of modern cast iron.

Why Is New Cast Iron Rough?

To understand why some new cast iron is rough, we need to look at the three stages that affect the "smoothness" of cast iron during the manufacturing process. These stages are:

Let's jump into each of these a little deeper so that you can better understand why some cast iron is rough, while others are sleeky smooth!

However, because these molds are made of sand, a rough and porous texture remains etched into the cast iron.

This is why the surface of cast iron has such a spongy look – as seen in the closeup image above! 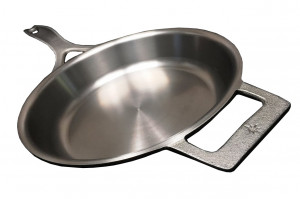 Once the freshly formed skillet breaks free of its sandy womb, it goes through a polishing stage to remove any remaining sand and metal burrs, as well as smooth the surface.

It is at this stage that the quality and price of the pan are determined.

Cheaper manufacturers, such as Lodge, simply polish their cast iron in a massive tumbler with steel slag. You may be familiar with this process if you've ever used a tumbler to polish rocks or clean bullet casings.

However, more expensive brands – such as Stargazer – will invest a little more time grinding and polishing away the top layer of metal until that spongy texture is gone – leaving behind a baby butt smooth surface!

It should go without saying that grinding and polishing a cast iron skillet is a time-consuming and expensive process.

In the past, cast iron cookware used to be sold as bare and unseasoned metal.

However, much of what is sold today is "pre-seasoned" as manufacturers try and push their way back into the modern kitchen by reducing the initial effort and overall maintenance required to start using cast iron.

This pre-seasoning can be a blessing or a tragic curse depending on what your expectations and experience are with your cast iron cookware. 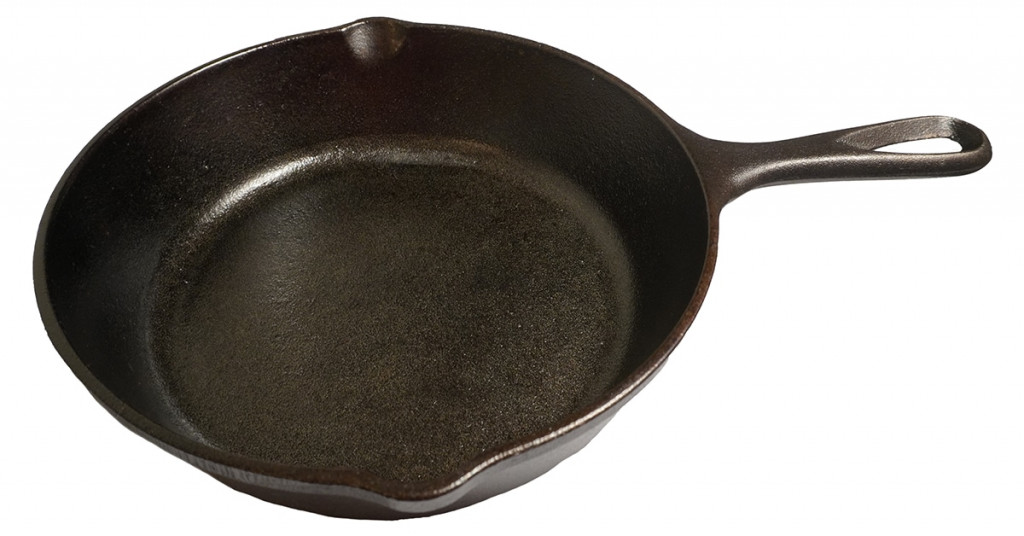 Some brands – such as Lodge – quickly and easily spray a soy-based oil onto their cookware before throwing it into a large high-temperature over to polymerize the oil into that slick black coating Lodge is known for. While this process successfully applies a thick seasoning that will protect it from rust, it also gives it a very rough surface.

While the seasoning on these pans will continue to build over time, the initial roughness can make cooking in and clean a frustrating process.

Then there are other brands such as Stargazer who put in a little more effort into their seasoning and use higher quality oils. After all, these companies spent the extra time polishing the surface of their cookware – it would be a shame if they ruined that hard work with a crappy seasoning.

If you wish to watch the entire process of how cast iron cook is made, check out the video below.

How Should This Affect Your Buying Decision?

If you take everything above into consideration, the price of a cast iron skillet will largely impact the polish and seasoning of its surface.

So how should this knowledge affect your buying decision? Does this mean that we should avoid buying cheaper brands such as Lodge?

It is important to note that just because cheaper brands put less time and effort into the polish and finish of their cookware, that doesn't mean that they are bad products.

Lodge, for example, has high-quality cast iron, and underneath that rough and cheap seasoning is the bare metal that you can polish to perfection.

With a little bit of time and elbow grease, your cheap $10 Lodge can have a better finish than a $150 Stargazer.

It really boils down to three outcomes:

This is one of the awesome benefits of cast iron, no matter what route you take, you'll end up with a piece that will last you a lifetime!

So let's say you choose the path of a cheaper skillet and are looking to take your cast iron down to the bare metal and give it a silky smooth surface that will only get better with time. How do we go about that?

There are three useful methods to smooth out the surface of your skillet.

The most effective method to smooth down the rough surface of a cast iron skillet is to simply grind away the roughness.

Remember, underneath that rough exterior is pure and smooth cast iron. With a little sandpaper, elbow grease, and time you can put a shine on the inside of your skillet so smooth, you can use it as a mirror!

If you would like to learn more about the process of polishing and resurfacing a cast iron skillet, check out this full step-by-step guide. 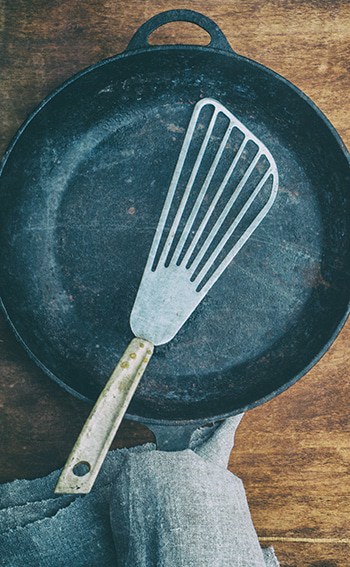 There is a lot of controversy surrounding using metal spatulas on your cast iron.

Some believe they can dig into and scratch up your seasoning, while others think they can actually help smooth out your pan by breaking away burrs and other rough edges.

If you would like to learn a little more about both sides of the metal utensils debate, be sure to check out the article, "Can You Use Metal Utensils on Cast Iron?"

But in my opinion, don't fear using metal spatulas on your cast iron.

The last of these methods is simply time and patience. If you treat your cast iron right and take good care of its surface, those layers of oil will continue to build.

Eventually, you will have a silky smooth cooking surface similar to a pan that costs several hundred dollars!

Note that the time required for this smooth layer to build completely relies on how much you use your pan and the care you place in preserving its seasoning.

So as we can see, the rough and bubbly surface that represents many newer cast iron skillets is nothing more than the way in which it is manufactured and finished.

Some manufacturers invest much more time and effort into the polishing and seasoning of their pans – this typically affects the price significantly.

However, just because brands put less time and effort into the polish and finish of their cookware, that doesn't mean that they are bad products.

You don't need to throw hundreds of dollars at your cookware to acquire something that will serve you well for a lifetime.

With a little work, even the cheapest skillets on the market can become the most magnificent piece of cast iron you've ever owned!

I hope this guide answered all of your questions about why cast iron is rough and how that roughness should factor into your buying decision.

So which path will you take, resurfacing cheaper cast iron or splurging on something perfect right out of the box? Let us know in the comments below!