Nerf guns have been around since 1992 and are still one of the most popular children’s toys to this day.

Yes, Nerf guns can hurt, but the darts and balls fired from them are made from foam and will not break the skin. Eye injuries are the main concern with Nerf guns but can sometimes be mitigated with safety glasses or face masks. If someone gets shot directly in the eye with a Nerf dart, it will likely cause pain and may require a doctor’s visit.

This guide covers which Nerf guns really hurt, how safe they are, and some great safety tips to help enjoy these toys responsibly.

Which Nerf Guns Hurt the Most?

Finding the Nerf guns that hurt the most isn’t a perfect science, but some noticeably stand out as able to produce a bit more sting. However, even these more powerful Nerf guns are designed with safety in mind.

The Nerf guns that hurt the most are those from the Hyper Series because they shoot the hardest. These toy blasters shoot small rubbery foam balls called Hyper rounds that are soft but denser than other Nerf ammo. 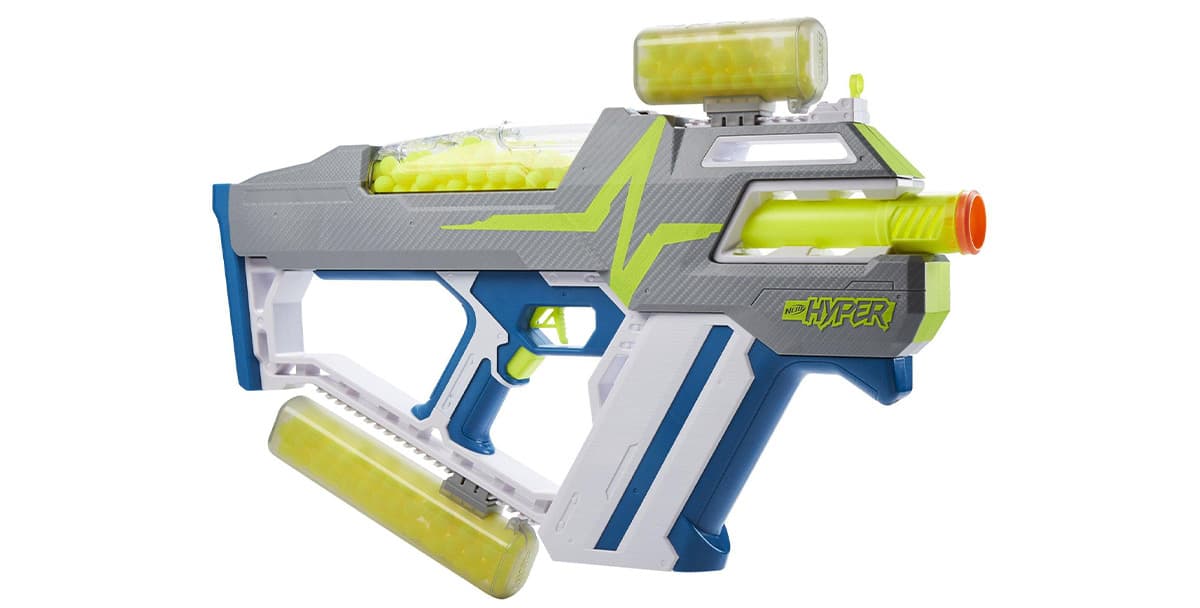 All guns in the Nerf Hyper series are recommended for an older age group and include some eye protection with the purchase.

The guns in the Nerf Hyper and Rival are made for those a bit older. Compared to 70 feet per second, the standard shooting velocity, these new ones can shoot up to 115 feet per second.

At the same time, the ball shape of the ammo they shoot does help reduce some impact even with the extra speed.

Rival series blasters are similar and include some of the biggest Nerf guns made. and shoot soft ball ammo that is bigger but softer than Hyper rounds.

Outside the main Nerf brand, the Adventure Force Nexus Pro will hurt as it shoots up to 150 feet per second. This blaster hurts the most of any toy dart blaster outside of those homemade or modified.

The Adventure Force Nexus Pro shoots harder than the Rival or Hyper series and uses darts instead of ball ammo. It shoots long or short foam darts that have slightly hard tips.

Which Nerf Guns Hurt the Least?

The Nerf guns that hurt the least are small ones that shoot the normal N-Strike darts. The Jolt and the Triad and two good examples of tiny blasters that shoot softer than average.

There isn’t one sole blaster you can definitively point out as the least painful itself. Everyone has a different pain tolerance, and a Nerf gun doesn’t shoot exactly the same speed every time.

Softer shooting speed does not always mean less pain as the type of dart factors into the equation. Some argue the Mega series blasters with the larger darts hurt more even though they shoot them softer than other guns.

When looking for a safer gun, the best option is usually a smaller one that is recommended for ages 8+(not 12+ or 14+) and shoots regular darts.

I believe it is more than fair to wonder if Nerf guns are a safe toy. As with any toy, there are some risks involved when you put them in the hands of a child.

Nerf guns are safe if you follow the suggested age guidelines and understand the basic risks of using them. Nerf toys are thoroughly tested and come with warnings to keep children safe.

The warning in the instructions for each Nerf gun is very similar with some basic points.

Here is an example of a warning directly from the Nerf Hasbro website:

“WARNING: CHOKING HAZARD: Small parts may be generated. Not for children under 3 years.”
“WARNING: Do not aim at eyes or face. Use of eyewear recommended for players and people within range. Use only official Nerf darts. Other darts may not meet safety standards. Do not modify darts or blaster.”

Most standard Nerf guns are recommended for at least ages 8+, but some newer ones are suggested for those ages 12+ or even 14+. These age recommendations will be listed on the package of the gun and in the “Product Information” or “Product Details” sections when shopping online.

This does not mean these dart guns can’t safely be used at younger ages with some adult supervision and direction.

First things first, nobody has died from getting shot by a Nerf gun. However, these toys shoot projectiles, so there is some risk associated with using them.

Eye injuries are most common with Nerf guns because it is only the real spot you can get hit where it can cause major damage. A dart to the eye can cause pain, swelling, blurred vision, or internal bleeding there.

The most extreme injury that is known to be caused is one rare case of a detached retina due to a direct dart in the eye. 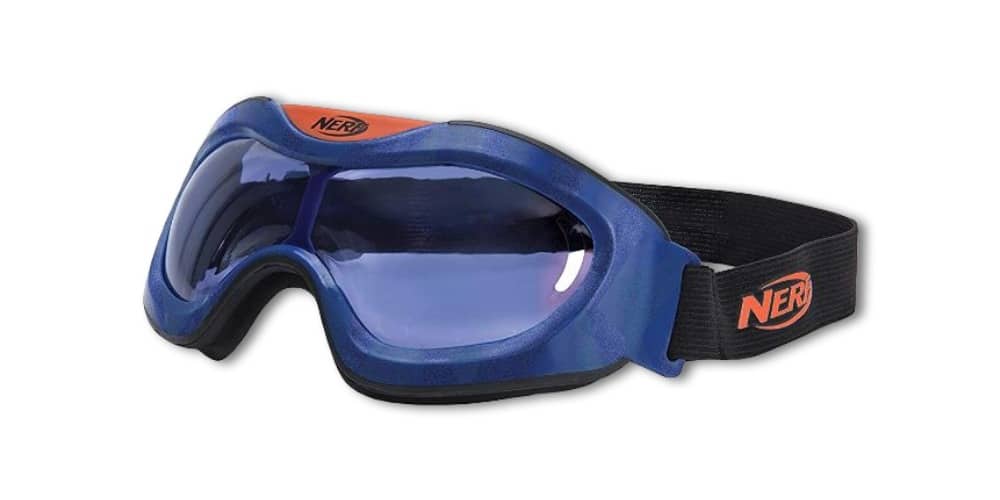 Here are some Nerf safety tips and ideas that can help prevent common Nerf injuries.

It seems like a no-brainer but the problem is most kids will not want to wear them, or won’t do so every time. One idea, though it costs more, is to buy Nerf branded eye protection.

Not only are these products specifically designed for Nerf but your child might wear it more often it if looks cool, or is the brand name.

Nerf Guns aren’t made for precision accuracy but simply not aiming for the head can help can save some tears. Besides the eyes, an ear, mouth, or nose shot can be quite painful if received just right.

In the heat of the battle, people will still occasionally catch one in the head, but this can reduce the likelihood.

To some it may sound silly, but using toys to teach children about gun safety is a great idea. Kids are going to be wild with toy guns and have every right to some fun, but a little safe guidance can’t hurt.

Here are some basic gun safety tips that can be taught to youth while even using toy guns:

4. Be Wary of Modified Nerf Guns

It is getting more and more popular to modify Nerf guns to enhance the performance of the toy. It is possible to do things like stretch internal springs, or take out safety parts that keep the blasters firing at the same speed.

Hasbro, the makers of Nerf, specifically warns against modifying their guns or the ammo. Tinkering with these toys can be a lot of fun for kids, but they might not fully understand the risks.

Modified, homemade, and 3D printed guns can be bought that can shoot 3x as hard as the average Nerf gun. These blasters are impressive and can be an excellent time for kids of an appropriate age. However, if Nerf doesn’t make it, it likely isn’t as well tested and as safe.

While these toy guns are tested to be safe for people, some animals might not be as resilient. Animals can act differently or lash out if shot, and like us could have their eyes damaged by the ammo.

Anyone that has been struck by a Nerf dart knows that you can feel them. While everyone has a different pain tolerance, I think it safe to say that Nerf guns can hurt.

Still, these toys have been enjoyed for more than 30 years and can be fun. How many families have had a fun moment with a spontaneous battle or by creating Nerf gun games of their own?

By following some basic safety guidelines and being aware of your surroundings, these activities can definitely be enjoyed safely.

As much as we hate it, following some basic rules and suggestions can prevent the little hurt caused by Nerf guns.