Bacon is amazing and no one will disagree, but have you really gotten to know it.

WARNING! THIS ARTICLE WILL MOST DEFINITELY MAKE YOU LOVE AND CRAVE BACON EVEN MORE!

Here are 25 fascinating bacon facts, that will hopefully get you even more excited about bacon!

1. There is a religion for bacon, the United Church of Bacon 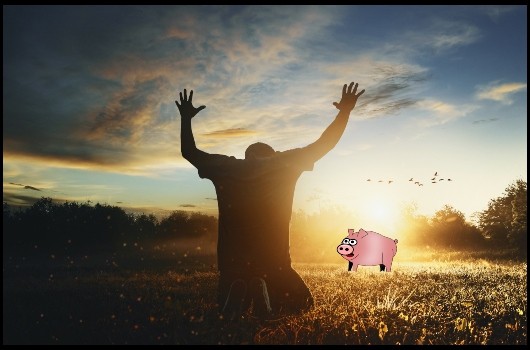 There is pretty much religion for everything now so a bacon religion may come as no surprise.

This religion initially started as a joke with the skepticism of all religions being the main theme.

However, I find it hard to believe that there are not members of it that truly do worship bacon.

Their official logo and seventh commandment does state "Praise Bacon."

2. The average American eats nearly 18 pounds of bacon a year

That is more than a bowling ball's weight in bacon. Do we need an intervention?

A survey asked what was the most frustrating thing about bacon and the answer people gave was the unresealable packaging.

Sometimes you may feel like you have to cook a whole package of bacon because you don't know how to properly store it.

I'm not trying to tell you how to live your life, but there are easy ways to freeze bacon so that you can access a little bit at a time.

You can have the sweet smell of bacon at your fingertips with bacon cologne and even bacon room spray.

Bacon tastes and smells good so if you smell like it everyone will love you, right?

There are two ways to find out. You can either rub bacon all over yourself every day or get some bacon perfume.

I would recommend the latter, or just not smelling like bacon.

4. Bacon was part of the first meal on the moon

When Neil Armstrong and Buzz Aldrin sat down for their first meal after landing on the moon they chose bacon.

Bacon squares to be exact, along with peaches, sugar cookies, pineapple grapefruit drink, and coffee.

5. There is a way to make bacon more delicious 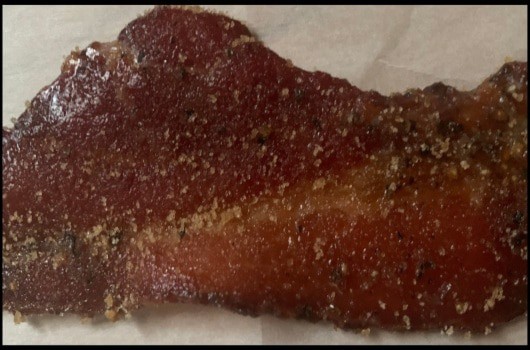 I know this is hard to believe but have you ever heard of candied bacon?

It is a glorious mixture of caramelized brown sugar and crispy bacon.

You sprinkle some brown sugar and spices on bacon and bake it to carmelized all flavors together.

Bacon is basically just meat candy anyway, but it is good to know that you can candy it even harder.

6. The word bacon literally means "meat from sides or back"

This bacon definition made complete sense as it was made from the back and sides of a pig.

These days most bacon in the US is actually made from pork belly.

The meat is sliced, cured, and fried, which as we know is a sure-fire recipe for success.

While bacon is an extreme American phenomenon, it seems to have Chinese origins.

It is believed that the Chinese were curing pork bellies with salt as early as 1500 B.C.

This seems to point to the fact that China may have created bacon as one of the oldest processed meats.

8. 70 percent of restaurants in the US have bacon on the menu

It is pretty simple, people know everything tastes better with bacon.

My only question is why is it not 100 percent of restaurants that serve bacon?

For the 30 percent that doesn't serve bacon, get with the program! 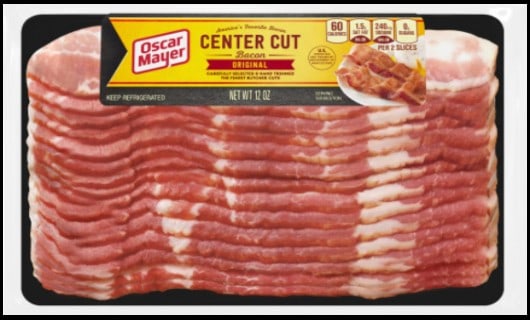 In a very innovative move at the time, Oscar Mayer patented and packaged sliced bacon in cellophane and cardboard.

Now nearly 100 years later bacon is still mostly bought and sold in close to the same style of packaging.

10. Pork accounts for 40 percent of all meat consumed on earth

I think we naturally look at beef and chicken as the king meats of the world, but that's not the case.

I think it's time we show the hogs a little more respect.

11. New York City consumes more bacon than any other US city

We may have to start calling New York the "Big Bacon" as it has the top bacon consuming market in the US.

It isn't hard to believe when you find out there are restaurants there that sell what is called "the bacon slice."

Yes, it is literally pizza nearly 100 percent covered in pieces of bacon.

12. Bacon alone is a $5 Billion market in the US each year

The popularity of bacon is still continually growing in the United States.

Since 2013, the bacon market has grown from $4 Billion to around a $5 billion market.

13. Bacon grease was used to make explosives during WWII 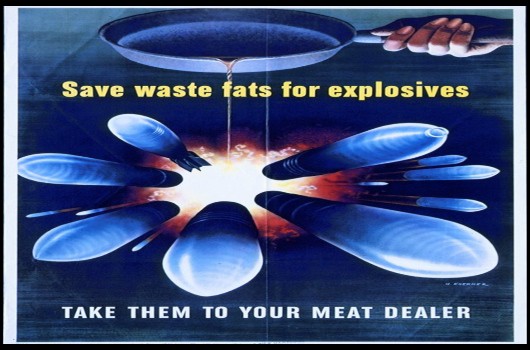 The American Fat Salvage Committee was created in 1942 to help the war cause.

Donating cooking grease like bacon fat became a patriotic duty at the time.

The fats were turned into glycerin which was used to make explosives.

People saved and used their cooking grease more often then, and it is reported that about half the population donated some of their grease.

This means a 200-pound hog will produce around 19 pounds of side bacon.

This is usually about 9-11 percent of the weight but it can vary as the processing is not done exactly the same way by each butcher.

15. People in the UK eat a different more healthy bacon

What! There are countries that eat healthier than the United States, how shocking!

It is true that they actually use the back of pigs to make their bacon.

This back bacon is leaner and more healthy all around than our belly or side bacon.

But is it as delicious? Not a chance.

16. Oscar Mayer once made a dating app for bacon lovers

The app Sizzl was launched to bring bacon lovers together in holy matrimony.

People were matched according to things like their favorite bacon types.

Sadly, it doesn't seem like bacon is the key to a successful relationship after all as the app seems to no longer be in service.

17. The phrase "bring home the bacon" has an interesting origin 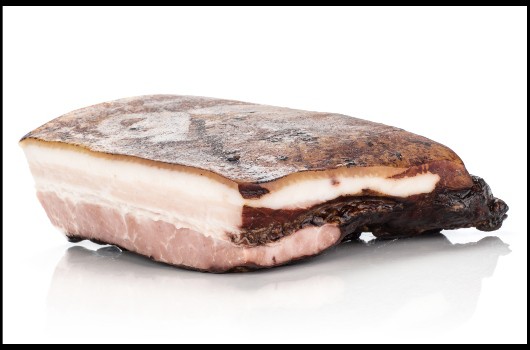 It is believed the phrase "bring home the bacon" may have originated with the tradition of Dunmow Flitch.

The story states that in 1104, in Great Dunmow, Essex, the religious authority awarded couples with sides of bacon if they could prove they got along perfectly.

This tradition still continues every four years, and if you are interested, it seems like a good way for liars to get free bacon.

18. 70 percent of bacon in the US is consumed for breakfast

BLTs for lunch and bacon-wrapped jalapenos for dinner is great, but nothing hits harder than the smell and taste of bacon in the morning.

Seven out of ten times bacon is eaten in the United States, it is for breakfast.

That is because Americans know how to start the day right.

19. The bacon eating world record is 182 slices in 5 minutes

Matt holds has held at least 14 other competitive eating records.

If you are looking for a fun summer activity look no further than bacon camp!

Bacon camp is described as a "5-day food learning and eating experience."

Camp events include: the Bacon Ball dinner, the Bacon Street Fair, and even the Bacon Film Festival.

21. Bacon has killed, and may kill again 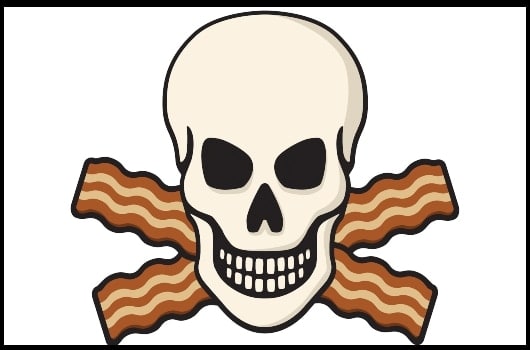 Okay, in all seriousness it was a tragic freak accident that occurred in 1543.

Elizabeth Browne was warming herself by a fire which was under four sides of bacon in the chimney.

While these sides of bacon were smoking, the rope that was holding them broke and the bacon crushed her.

She sadly succumbed to her injuries four days later.

A study found that bacon and other fatty foods "affect the brain in much the same way as cocaine and heroin."

Bacon is high in fat and is immediately cured with a solution of salt and sugar straight off the pig.

So bacon is basically a manufactured drug, but thankfully a legal one.

23. There is both a national and international bacon day

There are actually two days of the year dedicated to the celebration of bacon.

That's just two more good excuses to eat bacon if you ask me.

24. Choline found in bacon is key to fetal development

We are not saying bacon is good for you but bacon is a good source of choline.

Choline has been proven to be a key supplement to prenatal nutrition.

However, there are more healthy sources of choline like chicken breast, some fish, or even brussel sprouts. 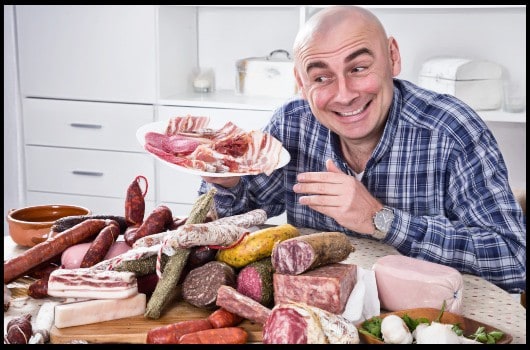 In a Canadian national survey Canadian men were asked to make a choice between bacon and sex, and 43 percent chose bacon.

23 percent of those men also ranked bacon as the number one best smell. Maybe bacon is the key to a man's heart.