Can You Boil Water in Cast Iron? An Honest Look

Can you boil water in cast iron, or will such an act upset the cast iron gods and curse your cooking forever?

If you ask any single cast iron using individual this question, you will likely be met with an absolute yes or stern no – nothing in between.

But the truth is, boiling water in cast iron isn't as black and white as most make it out to be.

While there are some repercussions to boiling water in your precious cast iron, they arent that significant, and depending on who you are, you may not care.

So let's quickly look at the evidence on both sides of the argument and let you decide for yourself which side is greener.

Why Boiling Water in Cast Iron is Bad

On this side of the fence, we have those who say you should never boil water in your cast iron... ever!

The fact is, boiling water can erode away your seasoning – that beautiful polymerized oil layer that protects your skillet from rust and makes it non-stick.

This will also have more of a negative effect if your pan is brand new or barely used, as your seasoning hasn't yet had the time to build up.

In addition to eating away your seasoning, it can also cause your black polymerized layer to soften, which makes it more susceptible to scratching while washing it.

Finally, the last factor to consider is that whenever something erodes, it has to go somewhere. While cooking food, that somewhere is in your food.

So if you don't want to risk your beautiful seasoning, little black specs, nor the taste of metal in your food, maybe stick to steel pots for boiling water.

Why Boiling Water in Cast Iron is Okay 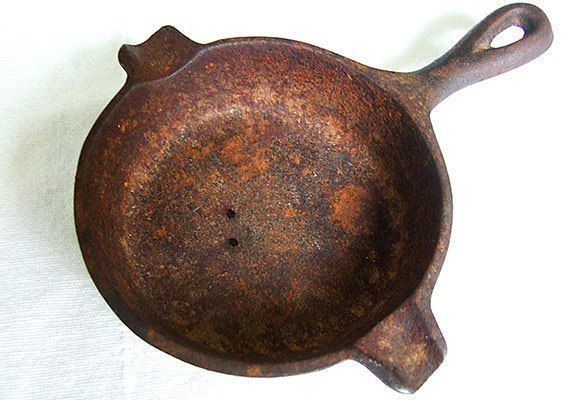 So if boiling water can ruin the precious seasoning of your cast iron, how could it ever be greener on the other side?

Well, it's not greener, but that's okay. Some people don't mind if their grass isn't the greenest, and they realize that if they ever do want green grass, they can always put in the effort at any time.

The beautiful thing about cast iron is that it is pretty damn near indestructible. While a little water might mess up the seasoning, it's not going to destroy the entire pan.

If you accidentally strip your seasoning – simply re-season it and you're good to go!

However, if you do go this route and boil water in your cast iron, be sure to take extra care while drying it out.

Heat expands the metal and allows water to seep deeper within the pores of the iron, so it takes a little more effort to dry. Just throw it on the stove for five to ten minutes after washing and let the heat evaporate the remaining moisture!

So back to the question at hand, can you boil water in cast iron?

In a nutshell... yes, it is okay to boil water in your cast iron so long as you understand that it can weaken your seasoning.

If you are not concerned with lessening or losing your polymerized layer, then you should find no surprises while using your favorite cast iron to boil water.

However, this all being said, I personally don't recommend it.

After all, the benefits of a well-seasoned cast iron skillet are one of the greatest joys of this world, why ruin it for a little boiling water?