It's not the first thing I would pick on the menu, but let's dive into the hypothetical here. Can you eat a butterfly if you needed to, let's say, for survival reasons? Are they edible?

Some species of butterflies are edible to humans, but you should avoid eating them as many are poisonous because of what they eat. There are no known butterflies toxic enough to kill a human, but they can make you sick. That being the case, several countries consider butterflies to be a delicacy.

In Asia, you can find skewers of butterflies and their larvae for sale on street markets. For those that are appalled at the idea, you may also be surprised to know that it's estimated that over 2 billion people eat insects every day.

The truth is many insects are high in protein and also contain many important vitamins.

Note: No little butterflies were harmed during the writing of this article.
Other Great "Can You Eat It?" Guides:

In the US, people seem to be more intoxicated with the beauty of butterflies and not so much what they taste like.

Besides being beautiful to look at, we don't want to eat them unless we really need to. This is because butterflies benefit us and our environment in many ways.

Here are some examples of the services they provide:

What Happens if You Eat a Butterfly?

While most of us will never likely munch on a pretty little butterfly, you still may want to know what happens if you do.

If you only eat one butterfly, you will likely be fine but risk an upset stomach and some nausea. You would likely have to have a feast of butterflies to make yourself super sick. Just the thought of eating an insect for most people is sickening, so you may struggle even getting it down.

That being said, there are better options for insects to eat if it comes down to a survival need.

But if you did have to eat one, you would want to kill it first and then cook it thoroughly to kill any potentially harmful bacteria.

It is important to note the difference between poisonous and venomous here. Poisonous refers to ingesting something toxic, while venomous refers to the injection of an actual toxic venom.

Many butterflies are poisonous, but none are venomous. The poisonous species are those that consume toxic plants. There are no one known species of butterfly poisonous enough to kill a human.

Butterflies, like the Monarch, have adapted to be able to eat plants that are toxic to predators when they are a caterpillar.

There are very venomous caterpillars and moths that could kill a human with their venom. They are so closely related that some species of moths can be mistaken for a butterfly.

When eating an insect or other animal, one concern is that it may have some disease that humans could catch through consumption. Can butterflies actually catch and spread diseases?

Like most other animals, butterflies can catch bacterial and viral diseases and spread those to other bugs. They are also susceptible to parasitic ailments like worms and mites. However, the risk of butterflies transferring the same diseases that affect them to humans is slight. Most of the infections humans get from insects are from bites, and butterflies can't bite.

That doesn't mean it is entirely impossible to catch something from a butterfly. Who knows where those little legs have been landing? 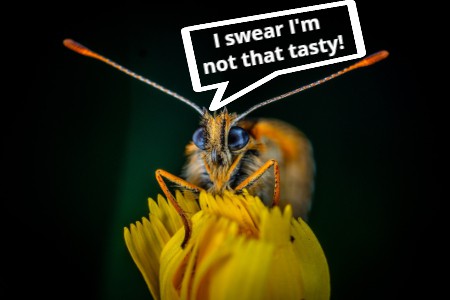 Butterflies taste like "dry toast" with not much flavor, according to a scientist who ate several Monarch butterflies in the name of science. He claimed they did not taste bitter, but it is suggested that some species may have a bitter taste.

Most research on what butterflies taste like is based on bird palatability, including taste, mental perception, and memory of nutritional sustenance.

The trouble is that birds have little sense of taste and smell, so it seems most of what they eat is just what they remember has sustained them nutritionally.

Dr. Frederick Urquhart consumed these butterflies because he thought birds might be avoiding them due to them having a bitter taste.

He had to find out for himself and was surprised that the ones he ate did not have much flavor.

Subsequent research showed that if he slowed them for the birds, they seemed perfectly happy to eat them. It turns out that birds may have just not liked them enough to put much effort into catching them.

This is interesting as there is proof that birds can remember if a food source has made them sick in the past. In fact, butterflies like the Monarch can make birds so sick that the bird can vomit at just the sight of ones that look like that species.

What do Butterflies Eat?

Naturally, as you may know, what an animal eats can affect how they taste. Therefore, it is important to consider a butterfly's diet if you are choosing a butterfly snack.

While butterflies are caterpillars, they eat solids like plant leaves; however, once evolved, they have a liquids-only diet. The food sources of butterflies vary from plant nectar to decaying animals, fruit, and dung.

While butterflies do have some tastebuds in their proboscis (straw-like mouth), the majority of them are on their feet.

They can get a sense of taste with their antenna as well as by landing on objects. This means if a butterfly has ever landed on you, they probably got a little taste of your skin!

What Butterflies Can Humans Eat?

The truth is that none are likely to kill you, but you should do some research to save a bellyache.

Butterflies are most commonly eaten in Asian countries while they are in the chrysalis stage. During this stage, the caterpillars are literally a soupy goop with a crunchy shell. If that doesn't fire up the ol' appetite, I don't know what will.

The best choice for edible butterflies would be those who don't eat toxic plants to humans, like milkweed. There are also some butterflies on the endangered species list, and it would be illegal to eat those.

Here are some examples of butterflies to avoid because they are known to eat toxic milkweed:

Of course, if you got to the point of really needing to indulge in butterflies, you probably wouldn't be too picky.

What is the Most Dangerous Butterfly?

Some butterflies are poisonous enough to kill small animals, and the most poisonous one has enough poison to kill six cats. 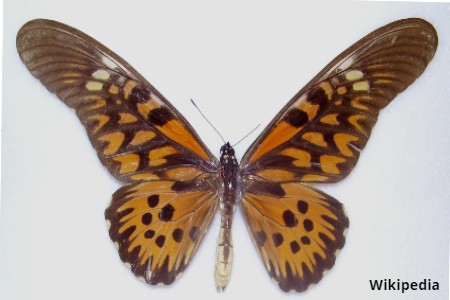 The African Giant Swallowtail has primarily orange and black coloring with some white and brown. They can grow to have as big as a 7 to 9-inch wingspan. With its size and its poison, would you be surprised to hear that it has no natural predators?

Note: Many of the more poisonous butterflies have black and orange markings. Let that be a warning to you if you are trying to choosing one for a meal.

There is one silver lining for those distraught at the notion of eating these magnificent little flying friends.

Butterflies do not have pain receptors and, therefore, cannot feel pain. They can feel touch and seem to be able to sense danger but not the stresses that come with pain.

This is probably a wonderful blessing for them, not only for death but also rebirth in their chrysalis form. You thought childbirth was hard? Can you imagine the pain of morphing from a caterpillar into a butterfly?

In the cocoon, the caterpillar's body literally breaks down and reforms as new. No thanks, I do have pain receptors myself, and I think I'll stick to being wingless.