Paper is something we are very familiar with, and let's be real, many of us already know how it tastes—whether it was by accident or on purpose. But you've probably still wondered at some point if paper is actually edible.

Eating small amounts of paper is generally harmless, but it is better to avoid it, especially if it has ink on it. Paper has little to no nutritional value and is indigestible by the human body.

Besides a little extra fiber, there is not much point to risk consuming traces of toxic chemicals that paper may contain.

Can You Eat Paper With Ink?

Now that you know paper isn't too dangerous to eat by itself, how about paper with ink?

You should not consume paper with ink as it is considered to be toxic. Exposure to small amounts is fine, but the ink can cause mouth, skin, and eye irritation. It will generally take a lot of ink to cause much irritation unless it comes in contact with your eyes.

Printer cartridges and ink stamps have a higher ink content and pose more risk than pen or marker ink.

So if, for some reason, you had to choose between eating blank paper and paper with ink, the regular uninked paper would be a better choice.

Other Awesome "Can You Eat It?" Guides:

What Happens if You Eat Paper?

Besides getting strange looks by people who may be watching, what will happen if you eat paper?

If you eat a little bit of paper by accident or on purpose, it will just pass through your body. However, in larger amounts, there is a risk of an upset stomach or even an intestinal blockage.

Even though it can't be digested, cellulose, the main ingredient in wood/paper, has been used as a food additive for at least a couple hundred years.

Yes, you read that right. Wood products are added to many foods that you and I enjoy today. For example, cellulose gum is a common additive that most people recognize.

Cellulose is a thickener and filler that will help make you feel more full and keep you regular.

The Food and Drug administration does limit the amount that can be put into different types of food. However, as you can imagine, a cheap filler additive like wood cellulose is abused and overused to profit the food industry.

Some foods are allowed to contain up to 4 percent cellulose. However, there have been many legal cases brought against food companies for having much more than allowed in their products.

For example, there have been brands of cheese labeled 100% Parmesan cheese that were tested and found to contain up to 10 percent cellulose.

Purposefully degrading the quality of food by either adding or replacing the food substances with unadvertised alternatives is called food adulteration.

If someone is found guilty of food adulteration, they could face up to 6 years in prison and hefty fines.

Did you Know? Olive oil, honey, and milk are among the foods found to be the most adulterated.

There is a common misconception that there are no health risks associated with eating paper.

Most paper is non-toxic and considered safe to the touch but may contain small traces of toxic chemicals. This means paper may be toxic if ingested, especially in large amounts. As paper products are often bleached, they often contain bleaching byproducts like dioxins.

Dioxins are toxins that have been linked to reproductive harm and cause cancer.

Most paper towels are known to contain traces of at least two toxic chemicals, Formaldehyde and Chlorine.

Paper has to be heavily processed to get it from the tree to the final product—a nice flat white sheet.

What is Paper Made of?

Understanding a little more about the manufacturing process of paper may help you see why you should avoid eating it.

Paper is made of processed wood pulp and other recycled paper products. Wood is primarily made up of cellulose and lignin. However, the lignin is mostly removed in the paper-making process. 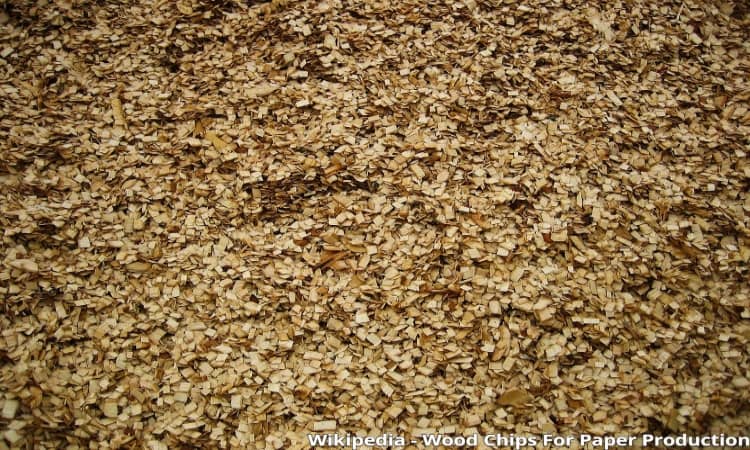 Cellulose is the fibrous part, and lignin is like an organic glue that helps hold it together.

Both cellulose and lignin are considered to be safe for consumption in small amounts.

Lignin is a natural glue, which gives wood its brown color, but it is actually detrimental to the strength of paper.

If not removed, lignin will actually cause the paper to discolor and weaken faster.

This is the biggest reason there are hundreds of chemicals used in the paper-making process.

Removing lignin takes high-pressure washing and high-temperature cooking, along with the help of many different chemical reactions.

It is also bleached in multiple stages to make the wood pulp white. After this, the pulp is fed into machines to be flattened, dried, and cut.

From there, it can be dyed to make colored paper.

Does Eating Paper Have Any Survival Benefit?

In a crazy hypothetical situation, could you eat paper to survive?

Paper could be used as a source of insoluble fiber, which helps move waste through our bowels. Other than that, it has no nutritional value but may be used to help you feel more full.

As mentioned before, cellulose is used as a filler in foods, so in theory, you could mix small amounts of paper with something nutritious for survival.

It would do nothing more than help fight some hunger pains and help you poop.

If you actually come to the point of eating paper for survival, you won't want to cook it but rather eat it very small amounts.

So paper could be considered better than nothing but should not be on the top of the list for survival foods.

Is it Normal to Eat Paper?

You may wonder how often people actually eat paper and if it is a common occurrence.

Paper is often consumed accidentally, but it is not considered normal to eat it on purpose. The craving to eat wood-based substances, or Xylophagia, is a subtype of the psychological eating disorder called Pica.

Pica is a common eating disorder that involves cravings for all non-food items. This disorder can be dangerous as the non-food items consumed may contain harmful substances.

This disorder is most common among children aged around 1-6 but can spontaneously develop in adults as well.

One possible cause for Pica-related eating disorders could be certain nutrient deficiencies, but there could be multiple causes.

How to Stop Eating Paper?

It is possible to get addicted to eating paper, and just as with other addictions, a person may need help stopping.

Xylophagia, the craving for inedible wood-based products, is treatable. However, if you or someone you know struggles with this, it is best to consult a doctor to get the best possible help.

Then a doctor may recommend taking certain vitamins or minerals to help fight a nutrient imbalance if one is present.

A psychological evaluation may also be suggested to help diagnose and possibly treat the mental aspects of the disorder.

It is nearly impossible not to have consumed paper in some way or another at some point in your life.

I hope after reading this guide it's clear that you shouldn't purposefully consume any non-food items like paper products.

From printer paper to napkins and even toilet paper, the stuff is still an essential part of our everyday life.

Hopefully, it's relieving to know that you are not in danger if you have consumed a little bit of paper, even though it is not manufactured to be eaten.

Fortunately for us, there are many sources of fiber that are actually nutritious and taste better too.