Whether you are looking for a simple yet unique way to say happy birthday or want to give someone a puzzling gift that they have to figure out how to decode, using Morse code to say Happy Birthday will never go out of style.

By the end of this guide, you will have the knowledge and skill to say Happy Birthday in Morse code using several methods, such as writing it, speaking it, or blinking it using your eyes.

How to Use Morse Code

Before we dive into the many ways to use Morse code to say happy birthday, we need to briefly learn the basics of using Morse code. 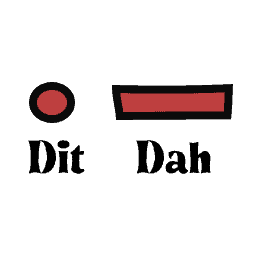 The dot signals a short burst of sound, while the dash indicates a more extended sound that is three times longer than the dot.

Morse code can be transmitted at any speed; however, this general timing rule always applies. For example, if we transmit dots as 1 second long, our dashes would need to be 3 seconds long.

By combining dots and dashes into different combinations, we can create individual codes that represent letters, numbers, and even special characters.

These five timing rules are as follows:

Using dots and dashes and these five Morse code timing rules, we can distinguish letters and words from one another and easily encode and decode a message.

So let’s do just that and learn how to use Morse code to say happy birthday!

How to Write “Happy Birthday” in Morse Code

Let’s say you want to send a really unique birthday wish. Why not send it in Morse code? You can write it on a birthday card, send it a text message, or even put it on a banner and fly it over the city!

They may not know what it says, but it’s always the thought that counts, right?

When laid out on a single line, “Happy Birthday” in Morse code will look like this!

When writing out Morse code, place a forward slash ( / ) between complete words to help the reader distinguish words from one another.

Also, be sure to check out our Morse code Alphabet guide to learn the rest of the letters!

Wanna get some heads to turn in utter confusion? The next time you sing someone a birthday jingle, just replace the “happy birthday” part with Morse code.

Morse code is well known for its audible transmission, so speaking is actually very easy.

To speak dots, simply say “di” and to speak dashes say “dah.” Additionally, every character that ends in “di changes to “dit.”

To say “happy birthday” in Morse code, repeat the following:

You can also listen to this phrase in Morse code with the audio clip below!

How to Blink “Happy Birthday” in Morse Code

Taking out the previous example of singing happy birthday in Morse code, why not make it even stranger and, rather than speaking it, stop singing and just quietly blink it with your eyes while intensely staring at the birthday boy or girl?

That would be a birthday to remember.

To blink characters in Morse code, the dots and dashes are represented in how much time you spend blinking. Dots will be represented by short blinks or flutters—like you have something in your eye—, while dashes will be more pronounced blinks as if you are resting your eyes for a split second.

Check out the animation below of our good buddy Rocky blinking, “Happy Birthday.”

How to Say “Happy Birthday” in Morse Code With a Flashlight

Let’s say that the love of your life is living next door, but you’re living that Romeo and Juliet life. It’s your soulmate’s birthday, and you want to celebrate with them any way that you can.

Why not flash them a happy birthday using Morse code and a flashlight?

To use light to say “Happy Birthday,” we’re simply going to represent our dots and dashes using short and long bursts of light. This is easily accomplished using a flashlight, or if you have a crafty hand, you can automatically rig up something that blinks your code!

In this short guide, we discovered a few fun ways to wish someone a happy birthday using Morse code, such as how to write it on a card or how to use it to blink a birthday jingle.

Morse code will never go out of style!

If you would like to learn more about using Morse code, consider checking out our other awesome guides, such as How to Say Yes and No in Morse Code.

Until next time, happy dabbling!