While there are still many other ways to bypass a combination padlock, including the use of a shim, bolt cutters, locksmiths, or even a blowtorch, none are quite as elegant nor non-destructive as old school combination cracking.

A standard 40 digit Master Lock has 64,000 combinations which would take the average human about 180 hours to crack by using random combinations.

This guide will aid you in reducing that absurd number to only 80 combinations and instruct you on how to crack a Master Lock in 10 simple steps.

1. Determine Your Model of Master Lock

Before we spend the time learning how to crack a combination lock, it's important that we first determine if this method of cracking will work on your model of lock.

Some Master Locks require additional or different procedures to crack as they use different algorithms.

The model number of your Master Lock can be found on the back of the lock. If by chance your lock's model number begins with 800 or 908,  this method of combination cracking may not work.

The first step in picking any type of lock is to set a standard starting point.

In the case of a Master Lock, we simply clear the lock. This is accomplished by rotating the dial, at minimum, three times past the zero mark in the clockwise (right) direction. Additionally, be sure to stop the rotation at the zero mark as well.

3. Place Tension On the Shackle

Now that the lock has been cleared and is set at zero, our first objective, which will seem backward, is to find the third number in our combination. 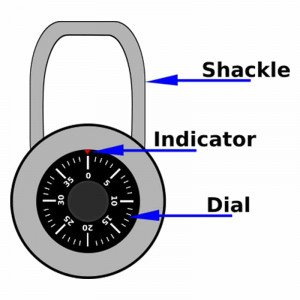 Begin by applying a tense pulling force on the shackle of the padlock. A great method of doing this is to grasp the lock in one hand while using a finger to push upward on the shackle.

While maintaining this upward pressure on the shackle, begin to rotate the dial slowly in the counterclockwise (left) direction.

Note here that there may be a chance the dial will be stuck on the zero mark while force is applied to the shackle and will not allow you to rotate it.

If this is the case, release the force on the shackle and rotate the dial one or two numbers counterclockwise.

Reapply the upward pressure on the shackle and once again try to rotate the dial counterclockwise.

While rotating the dial of the lock in the counterclockwise direction, you will shortly come to a point where it will jam and no longer allow you to freely rotate it.

The dial will be stuck in a rut between two numbers. You should be able to turn the dial slightly in the clockwise (right) direction and back again while still holding pressure on the shackle.

This is our first “sticking range.” Write down both stopping points in this rut.

Next, we have to find the "sticking point." This is done by simply taking the middle number of our sticking range.

In our example, this would be 7.

Be aware when finding your sticking range that the dial can also stop between numbers or, that is, halfway.

An example of this would be when turning the dial in the counterclockwise direction to find your stopping point and it instead stops between 8 and 9.

Your counterclockwise stopping point would then be 8.5. In addition, when you rotate the dial in the clockwise position, it stops between 6 and 7 giving you a stopping point of 6.5.

The resulting sticking range would be 6.5 to 8.5 and our sticking point would be 7.5.

Release the upward tension on the shackle and rotate the dial counterclockwise until you are just past the higher number of your last sticking range.

For example, if your previous sticking range was 6 to 8, rotate the dial to 9.

Next, reapply the upward tension on the shackle and just as before, turn the dial in the counterclockwise direction until it once again jams.

We now have 2 of the 12 sticking points we need to crack the third number of our combination.

Repeat the following steps of rotating the dial in the counterclockwise direction and finding the sticking points until you have 12 numbers recorded.

Below is an example of the sticking ranges and sticking numbers I collected while cracking the combination of my Master Lock.

If you did the steps above correctly you will notice that all of your remaining numbers end with the same digit, except for one.

This oddball is our lucky winner as it is the third number in our combination.

8. Finding the First Number of the Combination

The first step is to take the newly found third number of our combination and divide it by four.  In my case,  27/4. 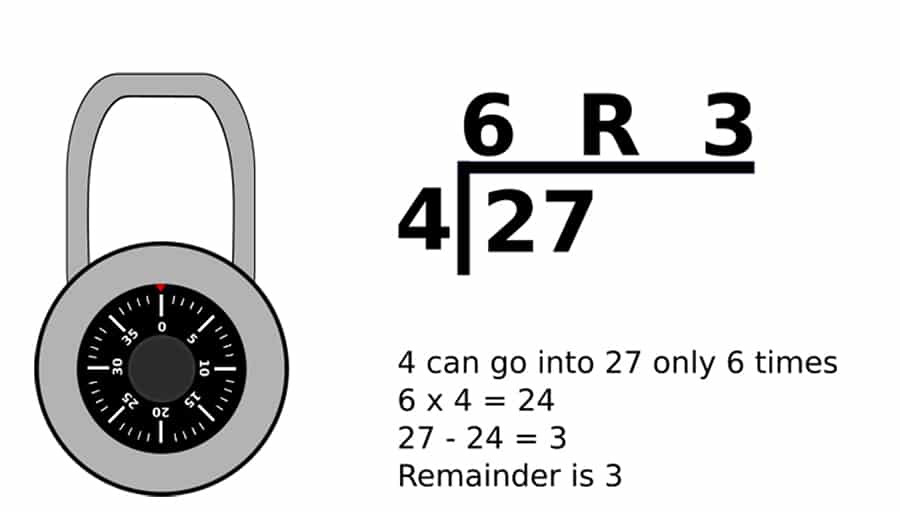 Of this new resulting number, we are only concerned with the remainder, or that is the decimal point. Write this number down. In my case I resulted in 6, making my remainder 3.

Now that we have our remainder, it's time to find our ten possibilities for the first number in our combination.

Begin by adding four to the remainder and write it down.

Then again add four to that result and continue adding four to each resulting number until you have a total of ten numbers. In doing this, your tenth and largest number should be a number available on the dial.

These are my ten possibilities, one of which is the first number in my combination.

9. Finding the Second Number of the Combination

To find the second number in our combination we again need to look at the remainder we used in the previous step.

Just as we did in the previous step, continue to add four to the resultant until you again have ten resulting numbers.

In my case, the remainder was 3, so I  would subtract 2 giving me a new number of 1.

We can narrow these ten numbers down slightly more by removing any number within two of our third combination number.

These are my eight possibilities, one of which is the second number in my combination.

We now have all the possible first and second numbers for our combination and have for certain our third number.

The next step is to simply hash out all the possible combinations until one works.

First, you must again clear the lock by rotating the dial a minimum of three times in the clockwise direction. Then while continuing to rotate the dial clockwise, enter your first number.

Next rotate the dial counterclockwise past your second number and continue to rotate it until you land on that number again.

Mine is 1, so I rotate past 1 and keep turning until I once again land on 1.

Finally rotate the dial once more clockwise to your third number.

It is very likely that your first combination won't work. But continue to clear the lock and enter every possible combination until you find those magic numbers.

You now know how to crack a Master Lock!