Meripilus sumstinei is a mushroom also known as the black-staining polypore because it turns a brown to black color where it is cut or bruised.

It is one of many species of sumstinei named after David Ross Sumstine in honor of his extensive research and specimen contributions for the advancement of mycology.

Besides its ability to stain black, M. sumstinei is also known because it is an edible mushroom mistaken for the popular Grifola frondosa, the hen of the woods, or maitake mushroom.

However, with a little research, these two mushrooms are actually fairly easy to tell apart.

This guide covers how to identify Meripilus sumstinei, some basic ways to distinguish it from the real hen of the woods, and some tips on eating it.

Meripilus sumstinei is a fungus that starts as a beautiful amorphous mass that grows to be a flatter, more defined mushroom. 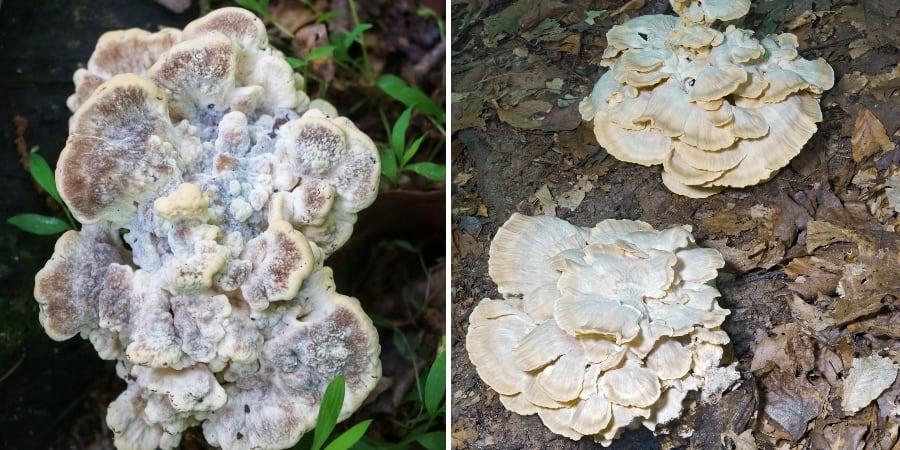 Though they are closely related, Meripilus sumstinei is a North American species different from the European species Meripilus giganteus.

These two are commonly referred to as the same species, but the M. giganteus can grow bigger, as the name suggests.

Starting as a cloud-like mass, the mushrooms grow to be fan-shaped.

When the mushrooms are fresh, the caps will generally be mostly white with colors of yellow and gold on the margins.

The interior flesh, which is white and firm, will both darken and get tougher as it ages.

This mushroom is a polypore and has no gills.

This polypore releases its spores from such small pores that the surface seems smooth.

The black-staining polypore has a short and thick stem up to 3cm (about 1 in) long and 11 cm thick (over 4 in).

They have a white spore print.

The Meripilus sumstinei species is most commonly found in the eastern United States.

These can both be a parasite and saprophyte and will be found near the base of oak or other hardwood trees from summer to late fall.

These usually grow in clusters that can grow larger than 40cm (16 in) in diameter.

None of these will bruise or stain black when damaged, liked M. sumstinei.

The Giant Polypore (Meripilus giganteus) is the European species close to Meripilus sumstinei and will stain black.

However, M. giganteus has been found in Europe and the Middle East but not in North America.

The Meripilus sumstinei is edible but not considered as good as the Laetiporus sulphureus (chicken of the woods) or Grifola frondosa (hen of the woods). This black-staining polypore has a mild earthy taste that can be acidic. It is best to cook this mushroom before eating it, as it is usually tough and chewy. 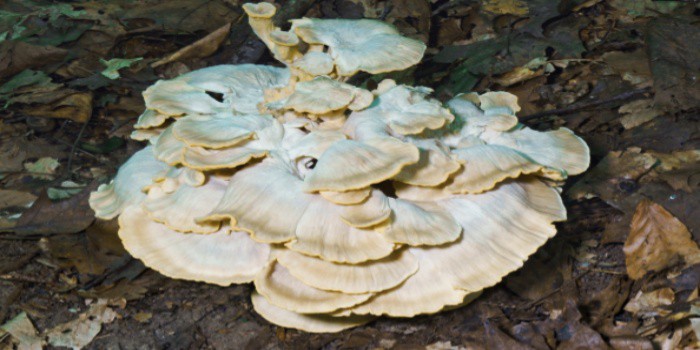 There have been reports of mild digestive discomfort and nausea when consuming this mushroom, but it is likely due to it being undercooked or eaten raw.

Polypores are known to get tougher as they age and develop to be woodlike, so it is definitely better to harvest them before they dry and darken.

I have seen it joked about as being called the “rooster of the woods” on several occasions as other related species are named after fowl.

While the other species got named after chickens and hens, this one probably got the rooster nickname because it is the least desirable of the three.

It is generally better to take your time and cook Meripilus sumstinei slowly.

This mushroom does not taste bad but will not be impressive on its own.

It will most likely be best mixed with hand-pressed burgers or put in a vegetarian burger mix used after being chopped or ground.

According to the Missouri Department of Conservation, while many mushrooms require cooking before they are frozen, Meripilus Sumstinei can be frozen raw.

Mushrooms are usually cooked first to preserve their texture, but the black staining polypore is very firm, so that may be why it doesn’t need to be.

Black Staining Polypore vs. Hen of the Woods

These are in the same family of fungi known as Meriplilaceae, but they have distinct differences. 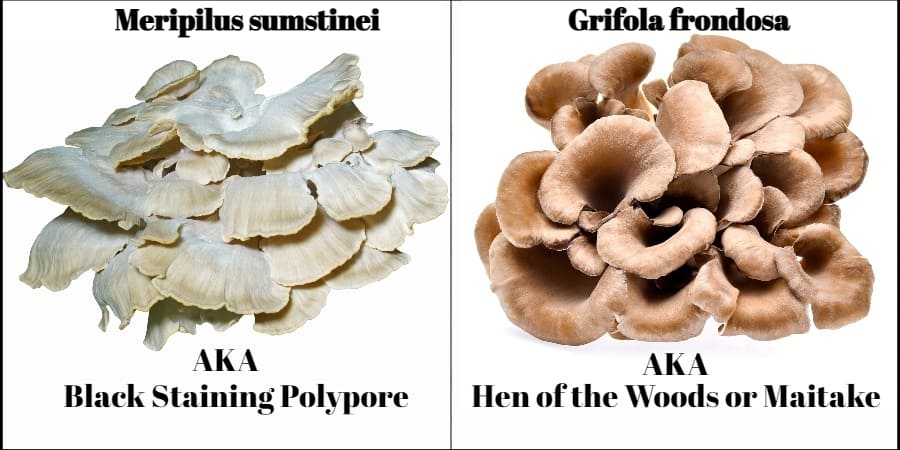 To tell the black-staining polypore and hen of the woods apart, you can bruise or cut them. should stain a dark brownish to black color within an hour of being cut or bruised. When both mushrooms are fresher, the real hen of the woods will be darker in color. Meripilus sumstinei will usually be a white to yellow gold, while Grifola frondosa will be whitish-gray to brown.

Their seasons overlap, but you will usually find the black staining polypore from early summer to fall.

You are more likely to find the hen of the woods later into the fall, but again, the staining test can help you confirm.

It is not a huge deal if they are mistaken as neither are poisonous, but the hen of the woods, or maitake, is more highly valued. 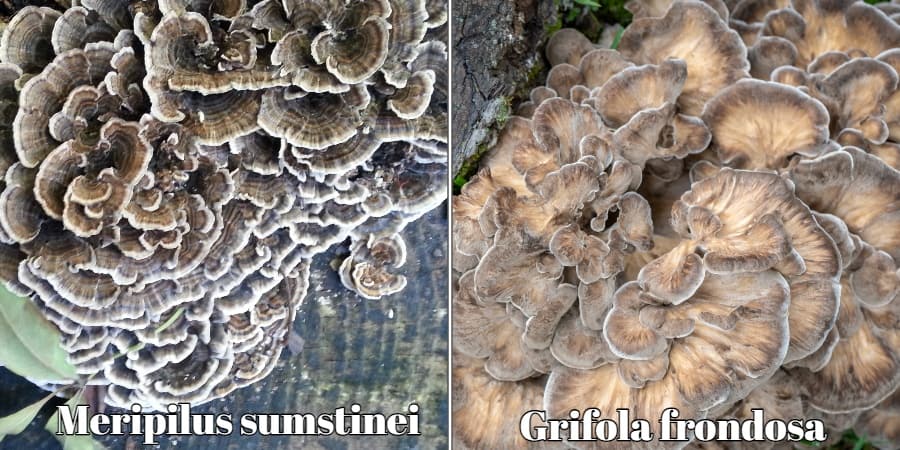 At times, these can be tricky to tell apart by color because their colors change as they age and dry out.

Meripilus sumstinei can be a viable food source even though it is not the most choice edible mushroom.

While the related European Meripilus giganteus has been shown to have anti-tumor properties, Meripilus sumstinei has not been so thoroughly researched to show medical benefits.

Lastly, the staining can be a clear distinction between other species, but always consult an expert before consuming mushrooms found in the wild.