There are two signals for Morse code, so does that make it binary, or does it really require more to be effectively communicated?

Morse Code is often referred to as a binary code because it is represented by two main characters: dots and dashes. However, because the code also requires spaces to be correctly understood, it can be considered ternary or even quinary.

To get a better understanding of how this can be, we should take a look into how Morse code was designed to work.

To learn and use Morse code in different ways, you first check out the two basic signals that started it all—the dot and the dash.

The Dot is represented by a period and is a quick and rapid sound.

The Dash is represented by a hyphen and is a more extended sound that is three times as long as the dot.

Each letter, number, and some special characters are assigned a combination of dot and dash signals.

This allows you to send words, but you still need help showing where words and sentences end and begin.

This is where the spaces, or pauses, come in.

Once you know the timing rules, morse code is universal and can be adapted to be used as a code with any language.

If you would like to learn more about the Morse code alphabet and other characters, check out the following guides:

Can You Use Morse Code Without Spaces?

When considering if Morse code is truly binary, it really comes down to one question. Can Morse code be properly communicated without spaces?

If you string together Morse code without spaces, you will run into issues on the receiving or output end. The spaces are a critical piece in helping the receiver tell where letters, words, or sentences start and finish.

When the signals are not separated, there really is no way to tell letters apart. It is pretty safe to say that the code does not work properly without the spaces.

Ternary, a synonym for trinary, refers to something made up of three things. Let’s look at how Morse code can be considered ternary.

Some consider Morse code as ternary because, along with the dot and the dash, you also need a space to interpret the code. It comes down to personal interpretation, but the necessity of all three would make it at least ternary.

The code can technically be ternary because you can just use the single space in a row multiple times instead of thinking of each different type of space as its own unique part.

There are actually three separate types of spaces, or pauses, used in Morse code. This actually could take the number of characters in Morse code to five.

It is plausible to consider Morse code as quinary as it actually has five different elements to be used as intended for clear communication.

Without any one of these variants of spaces, a message can run together and be interpreted in several different ways.

What is the Difference Between Morse Code and Binary?

Morse code uses dots and dashes primarily, while binary uses the numbers 1 and 0. You can consider the dots comparable to a 0 and the dash to a 1.

The problem you run into is that the dots and dashes are defined with the use of pauses as well.

Morse code is more a variable length coding system dependent on spaces in between the signals for clarification.

If you used the dot for a 0 and the 1 for a dash, you would still need another character like a 3 for the spaces.

At that point, it would be no longer binary but rather ternary.

Morse code is more comparable to ASCII than it is binary.

You can use a binary tree to help you interpret and even learn Morse code faster.

With this chart, you can determine the dot and dash signal combinations for the letters and numbers of the alphabet. 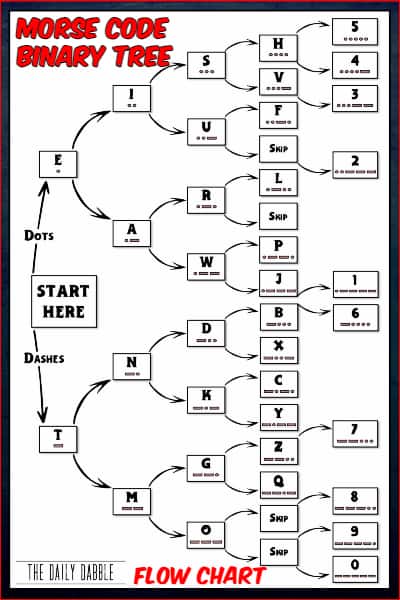 This Morse code flowchart is considered a binary tree because there are two paths to follow when determining the symbols representing a number or letter.

It is pretty simple to use:

This can also be used to try and quickly decode an incoming Morse code message as you hear or see it.

Just follow along with the signal as fast as you can with your finger while listening.

By simply using this chart, you can quickly see again why spaces are critical in Morse code.

For a deeper and more complex dive into this question, you may refer to the main source for this article – Is Morse Code binary, ternary or quinary?