If you are looking for an awesome gift for those dinosaur-loving kids, take a look at this new series of Nerf DinoSquad blasters. There isn’t much to think about, youngsters love dinosaurs and Nerf. It really is a perfectly fun combo.

Each of these Nerf guns has a fearsome dinosaur theme including a powerful T-Rex, a sleek Raptor, and a horned Triceratops.

We have assembled and honestly reviewed the top 5 choices. These most popular and work just as advertised to spark some imaginative play!

What is the best Dinosaur Nerf gun?

Let’s start off with the top choice that is guaranteed to be a hit!

The Nerf DinoSquad Rex-Rampage is the best dinosaur-themed Nerf gun. The Rex-Rampage is great for kids because it is a motorized blaster that makes firing fast and easy. It includes an attached scope, a 10-dart magazine, and 20 dino-colored darts. 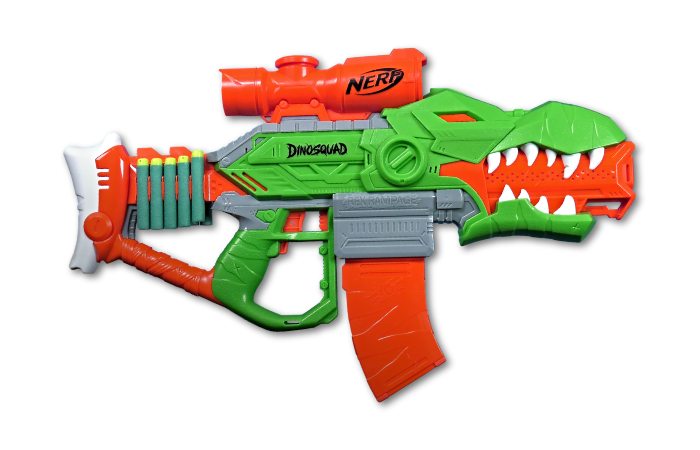 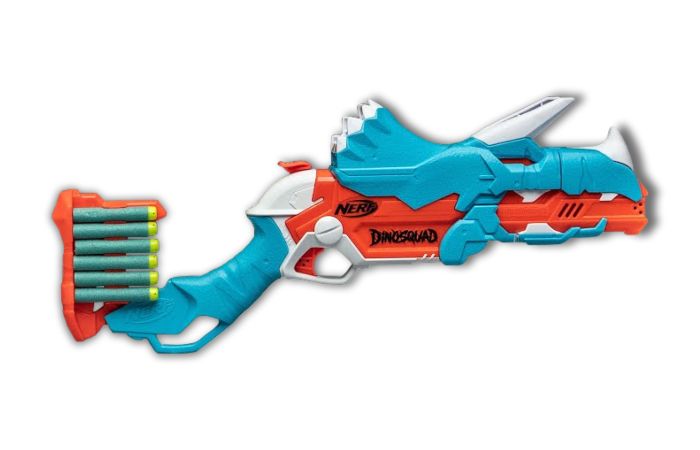 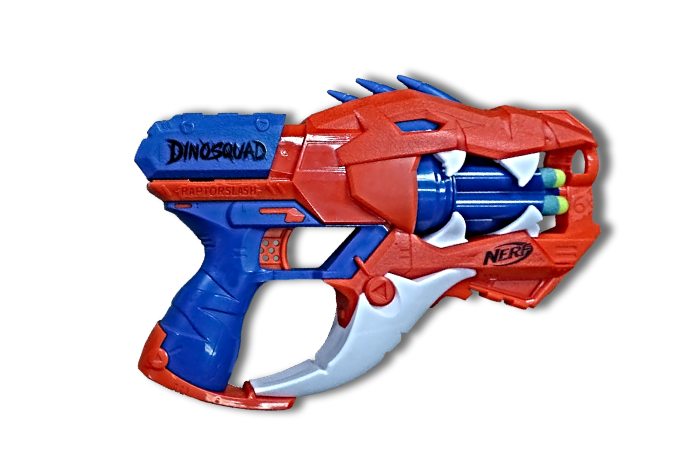 When it comes to choosing the dino blaster for the person you are shopping for, it may be as simple as figuring out what their favorite dinosaur is.

See all these blasters below, along with the pros and cons of each to find the perfect one!

Here Are the Best Dinosaur Nerf guns in 2023

Designed to look like a ferocious T-Rex the Nerf DinoSquad Rex-Rampage blaster is a smooth shooter.

This is flywheel powered and requires 4 AA batteries to power the motor. The front of the gun has the face of a snarling T-Rex featuring teeth around the barrel.

To fire, you use the rev trigger to get the wheel spinning and pull the firing trigger to fire one dart at a time. 20 darts are included to load the 10-dart magazine, and the rest can be held in the dart storage clip on the stock of the gun.

Shooting darts at up to 70 feet per second, you can get a range of about 50-70 feet max with a bit of an angle.

The scope is permanently attached but is a good size and is easy to see through. Other than there are no tactical rails or any room for additional attachments.

Who Should Buy The Rex-Rampage

All of these dinosaur Nerf guns are designed for a younger audience and this one checks all the boxes for all-around ease of use.

The Rex-Rampage is nice because it only requires 4 AAs compared to big dart blasters that use 6 D types.

It has a fun design T-Rex theme for intimidation factor and is easy to shoot.

You don’t have to prime, or cock, this blaster, which makes it a bit easier for kids to play with.

While most of these dino blasters aren’t compatible with attachments, this one includes a few that make it feel a bit more complete.

Our choice for best-looking design, the DinoSquad Tricera-Blast is a single-shot, break barrel blaster.

With a red, light-blue, and white color theme, it sports the recognizable three horns and frill of a Triceratops.

To load this one, you open the gun by holding the back and pushing down on the front end. Inside there are three slots for darts that shoot out of the single barrel one at a time.

You close the front back up and prime the Tricera-Blast to fire a dart with the hammer action lever on the back.

Who Should Buy The Tricera-Blast

Besides the T-Rex the Triceratops is one of the most recognizable dinosaurs that kids like.

The break-action style of the Tricera-blast adds some realistic feel, and it isn’t too difficult to load.

The is one of the softer shooting DinoSquad blasters which can be a good or bad thing depending on how you look at it.

The best choice for a dinosaur-themed Nerf pistol right now is the Raptor-Slash, a spring-powered, 6-shot revolver blaster.

The shell of this gun is a red-blue Raptor with teeth around the barrel and a mohawk up top.

To cock the Raptor-Slash you pull back on the top rear priming handle before firing each shot.

It has a bit lower dart speed at around 65 feet per second, but thats plenty enough to get the job done.

You can also use the slam-fire feature on this one by holding down the trigger and pulling the primer as fast as you can.

The Raptor-Slash comes with 6 darts, which are loaded in the front by rotating the barrel a bit to get them all in.

Who Should Buy The Raptor-Slash

While this isn’t the best Nerf revolver available, people are buying this for its sweet design, which is unique.

The softer shooting speed is barely noticeable and is actually better for a kid’s Nerf battle.

There are no extra frills or attachment options, but that is the same for all of these DinoSquad guns.

This is the best budget blaster on the list, costing less than even some of the best smallest Nerf guns. 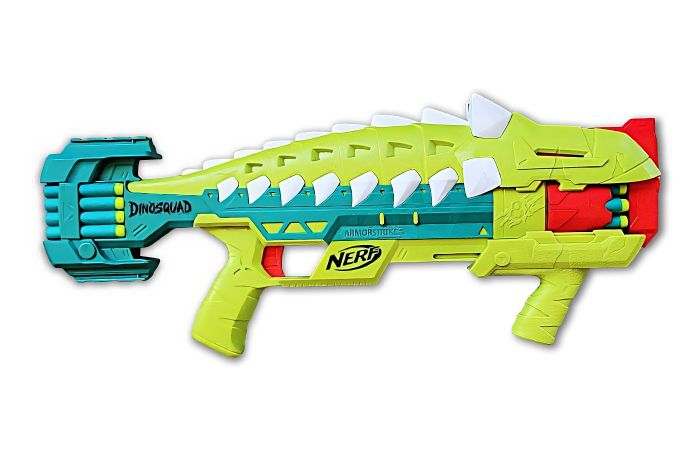 If you fancy your blaster looking like an Ankylosaurus, the DinoSquad Armorstrike is a sturdy pump action option.

The exterior design features the spike armored back and horned head with an 8-dart rotating cylinder in its mouth.

Just like the Rex-Rampage, the Armorstrike includes enough darts to fill the blaster and then more for a full reload in the dart storage clips.

This armored dinosaur gun shoots around the normal velocity of 70 feet per second but doesn’t feature slam fire.

Where the infamous clubbed tail would be, there is a stock with ammo storage and small tactical rails on top and bottom.

These tactical rails add some room for attachments but at a spot that isn’t ideal for anything but more storage.

Who Should Buy The Armorstrike

If you don’t want to deal with batteries and don’t mind pumping to shoot, the Armorstrike is a solid runner-up to the Rex-Rampage.

You can’t crank out the darts super fast as it doesn’t have slam fire, but it has a simple prime and no firing issues.

While it has the style of a pump action Nerf shotgun, it fires one dart at a time.

Eight darts is a pretty good capacity for a revolver blaster, and this one is easy to front load.

There isn’t much room for attachments or customization, but this is an awesome-looking Nerf blaster for kids. 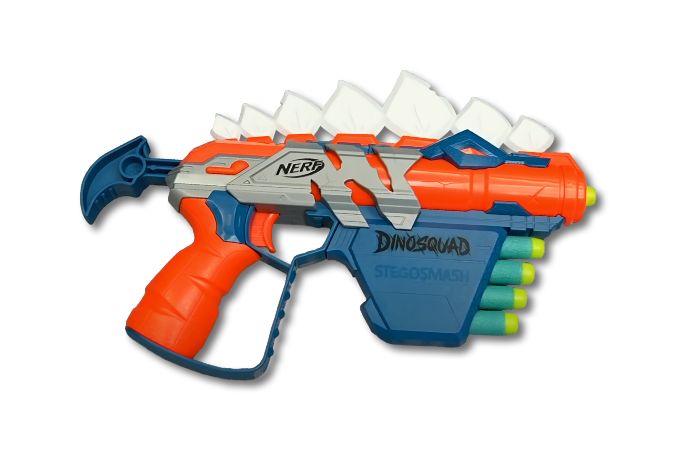 Arm this blaster quickly with a pull primer on the back and fire one shot with four darts at the ready in ammo slots under the barrel.

The Stego-Smash has the standard Nerf performance, at 65 feet per second dart velocity.

One extra feature on this on this one is the hand guard over the grip. Keep in mind that those with bigger hands might find some of these grips a bit small.

Who Should Buy The Stego-Smash

Kids seem to love this one as there are tons of positive reviews. The spikes are super cool and not sharp or hard enough to do too much damage with.

It really is a standard Nerf pistol, but well-priced at under $10.

This one costs about the same as the Raptor-Slash, so a decision probably comes down to which you think looks better.

It is really close in size as well, but much smaller than the rest, so may be better for the younger kids.

Nerf DinoSquad is a series of dinosaur-themed Nerf guns that are recommended for kids aged 8+. It was initially launched in early 2021 with more blasters expected to be released.

How Many DinoSquad Nerf Guns are There?

The Nerf DinoSquad series currently consists of 6 Nerf guns and 2 super soakers. The newest is the Terrodak which was released in 2022.

How Much do DinoSquad Nerf blasters cost?

DinoSquad blasters range anywhere from $9 – $35 with the current average price at close to $19. The cheapest blasters are the Raptor-Slash and the Stego-Smash found at around $10. The most expensive is the Rex-Rampage because it is the biggest and is battery-powered.

These blasters can be found at most common stores like Amazon or Wal-Mart.

It is very fair to say the Dino Nerf blasters on this list are the best out now. There are other off-brand options but they cost just as much or more.

Nerf still has the best quality and consistent working blasters. None of these shoot super hard so they make great gifts for younger ones.

If you are looking for other popular Nerf blasters for kids, be sure to check out the best Fortnite Nerf guns!