The Nerf Zombie Strike series is perfect for those who love unique Nerf blasters that stand out and are extra fun to use.

The zombie-themed Nerf blasters have unique hand-crafted looks like something you’d see in a movie or video game. They are popular because of their awesome designs and the extra features that many of them have specifically for defending against zombies. From shotguns to crossbows to blasters that look a crazy scientist created them, there is a Zombie Strike Nerf gun for everyone’s style.

Do you have your zombie blaster for when the outbreak hits?

There are 25 Zombie Strike Nerf blasters as of now, with more still being released because they are so popular.

We have reviewed these to find the best of the best and save you the time of going through them all yourself.

What is the best Zombie Strike blaster?

The best Nerf Zombie Strike gun currently in 2022 is the Nerf Zombie Strike Scravenger. It is a sweet lever-action blaster with loads of zombie-slaying attachments, including a backup mini Nerf gun. The scavenger can be fired quickly in slam fire mode and makes the top of the list because of all the stuff it includes.

We guarantee the Zombie NERF blasters on our list are the best available currently.

Here are the 10 Best Zombie Strike NerfGuns in 2022

The best part of the Scravenger is all the included extras and attachments that, when assembled, make it feel like a real all-in-one Zombie fighting machine.

It includes two 12-round magazines and 26 green Elite darts, which it fires at up to 70 FPS. Additionally, it includes a switch that enables it to be fired quickly with slam fire.

The barrel and stock are both detachable and easy to reattach or be replaced by others with N-strike compatibility.

A holster clip for the double-barrel version of the Nerf Jolt on the stock, which is a compact little 50 FPS shooting backup pistol.

The optic sight has ammo storage that will fit the extra clip and means pretty much everything included can be held on the gun itself.

Last but not least, the dim green tactical light can be attached to the lower tactical rail and is operated by 3 AAA batteries.

The Nerf Zombie Strike Revoltinator is a fantastic designed motorized blaster with different flashing features and sounds when you fire.

It alternates flashing between the orange circular light above the grip and the blue electric ones in the middle when pulling the trigger.

Besides the sounds and lights, the 4 AA battery-powered motor makes this super easy to fire and fun to shoot.

Batteries are included with an 18-round magazine and enough darts to fill it.

It shoots around the average 70 feet per second and flings about 3.2 darts a second reliably.

There is also some room for customization with an N-strike compatible lug to attach a barrel and lower tactical rail for an extra grip or light.

If you are looking for another capable of massive zombie destruction, I would check out the Rival Nemesis. It’s not zombie-themed, but it is the best automatic Nerf gun out today at a reasonable price for its monstrous 100-round capacity and 100 FPS velocity. 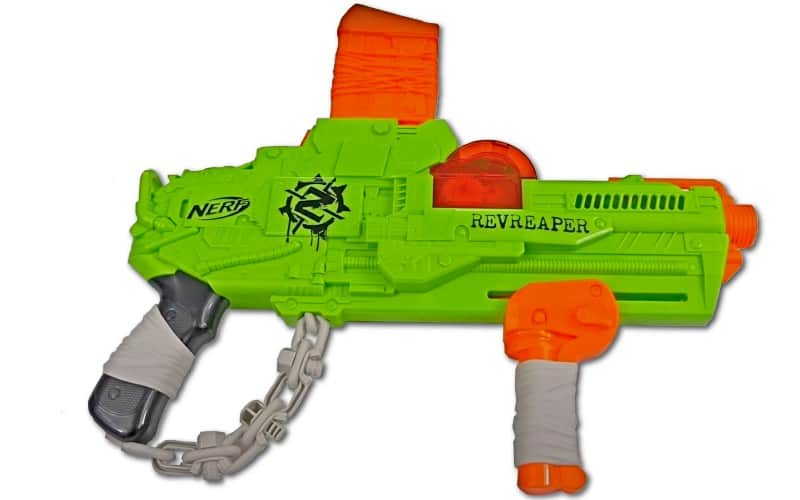 The Nerf Zombie Strike Revreaper is an interesting mechanically flywheel-powered blaster that has a revving noise when fired.

Most Nerf guns that are flywheel powered require batteries, but this flywheel is spun up with the pump-style priming handle.

The dart velocity at which this blaster fires depends on how hard you pump the handle.

The FPS can range from 50 to 90 FPS depending on the pump force and how fast it spins the flywheel inside.

The manual flywheel is fun as it allows you to choose how hard and fast you want to shoot at your opponent.

I feel like this is one of the coolest-looking guns with the upside-down top-loading 10-round magazine, red see-through gear chamber, and neat lower chain.

My only real complaint is that it has no real options for customization with no tactical rails or other attachment points.

Still, the revving noise, fast firing rate, and solid velocity, the Revreaper shoots make this my personal favorite to fire.

There are really other Nerf guns but if your looking for high-velocity blasters take a look at our list of the hardest-hitting Nerf guns.

The Nerf Zombie Strike Hammershot is always a great choice because it can be primed and fired one-handed.

The hammer action primer can be armed by most people with one finger, which helps make it a quick and easy-firing blaster. This way, you have twice the firing power by holding one in each hand and can shoot two different targets at once.

The Hammershot shoots straight at around 60 FPS which isn’t too bad for the easy prime. It also does have an N-strike tactical rail on top for a scope or other attachments.

Its ease of use, simple-to-load five-round barrel, and sweet design all help give the Hammershot a deserving place on the list of best Nerf pistols.

For an even closer look at its pros and cons, there is more info in our in-depth Nerf Hammershot review.

Besides the Flipfury that is already on this list, the Quadrot is another great zombie-themed choice. It has a slim design that makes it easy to conceal, with four barrels stacked on top of each other. 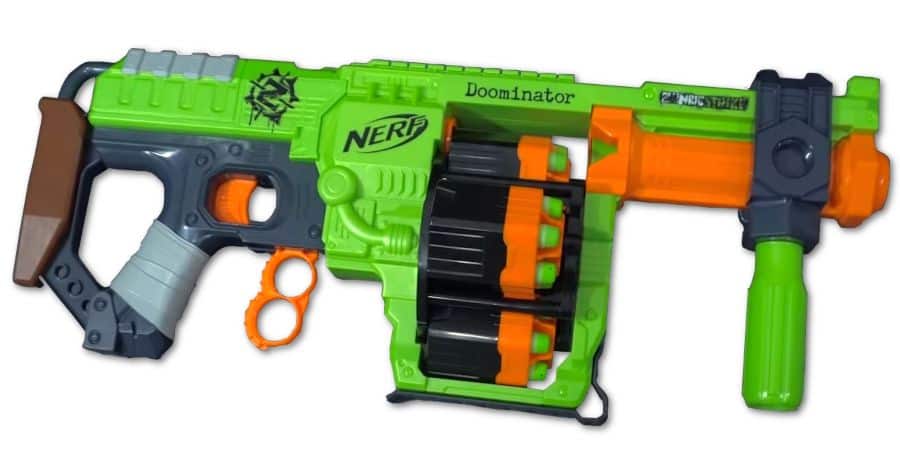 The Nerf Zombie Strike Doominator is a 24-dart capacity powerhouse of a blaster.

It has 4 six round drums that are easy to load and can be rotated through quickly with the double ring lever.

One really nice feature is the priming handle that can be removed and threaded on either side or the bottom.

The handle adjustment option will allow you to fire it comfortably with either hand, depending on your preference.

The 24 elite darts are included, and the blaster fires them at around 70 FPS.

It has one upper N-strike tactical rail for optics or other attachments.

The main con of the Doominator is the stock that is too small to shoulder comfortably.

The FlipFury is basically the Doominator in pistol form, and you will see it on the main list again because it is a smooth operating, high-capacity Nerf zombie pistol. 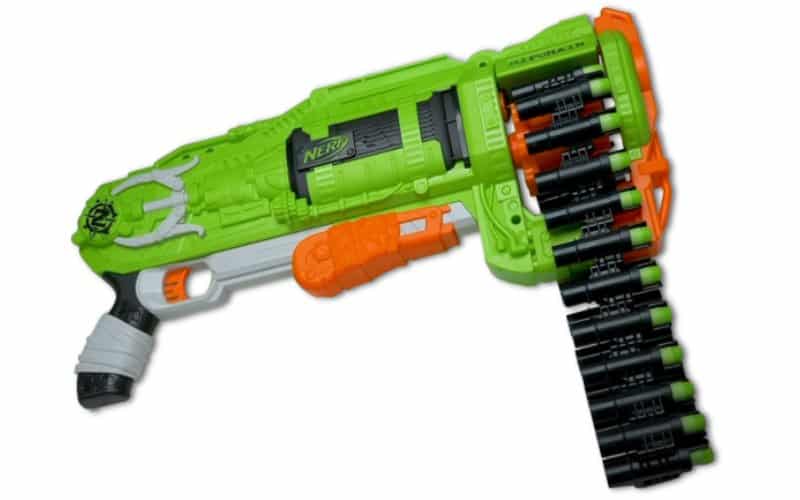 The Nerf Zombie Strike Ripchain is an intimidating chain-fed gun that can be fired fast with slam-fire.

This gun is sure to keep the zombies at bay with its highest ammo capacity of any zombie Strike Nerf gun at 25.

You can remove the chain to load the gun or just front load it while it’s in the gun.

There is no customizability option with the barrel, but it does have an upper N-strike tactical rail for an optic.

It can launch darts quickly with slam-fire, but the chain will likely have feeding issues when shooting it faster.

The Ripchain’s dart velocity will average close to the typical 70 FPS and includes the darts to fill the chain.

I put this blaster lower on the list because chain-fed guns are prone to occasional feeding or firing issues.

If you don’t mind an off-brand suggestion, the battery-powered DZ Super Commando Scorpion is a cheaper alternative with more stuff included. It comes with an extra 18-round chain, shoots at over 100 FPS, and has the same zombie coloring theme.

Nerf Zombie Strike Brainsaw is an eight-barrelled blaster featuring a foam chainsaw that revs up with a pull start string.

The main issue with this gun is that the smart air restricting system causes the lower barrels to shoot at a lower FPS velocity than the upper ones.

The Crosscut is the Brainsaw’s little brother in the form of a double-barrel pistol with a revving chainsaw attached as well. 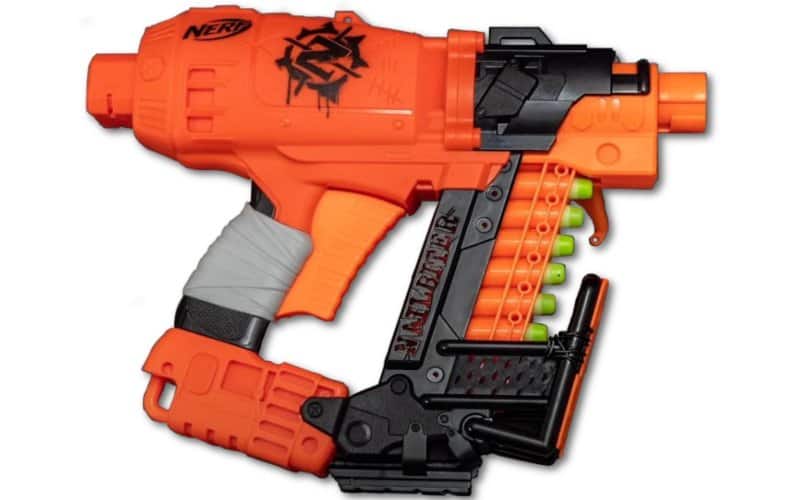 The Nerf Zombie Strike Nailbiter fires with a trigger pull without having to prime first and, as you can see, is designed to look like a nailgun.

This gun is front-loaded by pulling the clip up and then pushing it back down when done.

As you fire, the clip moves back up automatically so you can easily load it again.

Unfortunately, the clip is not removable, so you can’t have another clip ready to reload quickly.

The main issue with the Nailbiter is that that trigger is naturally stiffer because it does the priming and firing.

That means it is not easy to use for extended periods as your hand will likely get tired or cramp a bit.

With all that said, I think this is a fantastic idea for a zombie-themed gun, especially with the extra attachments you can purchase.

The attachments included an ammo holding stock and an adjustable zooming barrel.

You can purchase the Nailbiter Zoom and Doom version to get these included or just buy them separately. 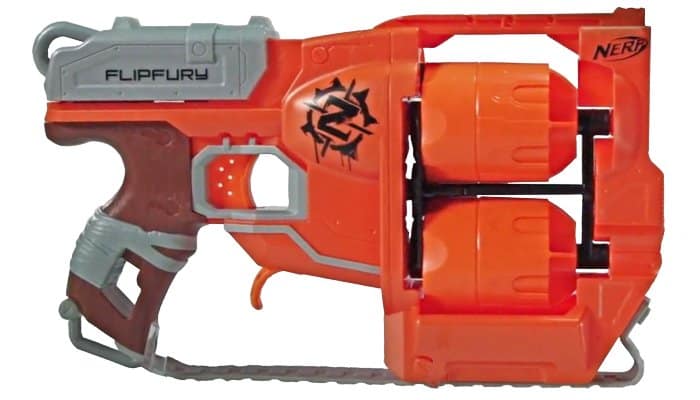 The Nerf Zombie Strike FlipFury has a quality-designed dual 6-round drum system that is smooth as butter. When fighting hordes of zombies, the quickly accessible second drum makes this a solid backup blaster.

It includes the 12 green Elite darts that it holds, and just a pull of the second trigger will flip change drums so you can keep on firing.

The upper tactical rail is compatible with N-strike attachments, and the priming is a smooth slide action on the upper rear.

This gun has slam-fire, which means it can be unloaded quickly by continually pulling back the priming handle and holding down the trigger.

The smooth rotating drum mechanism makes this a sweet Nerf Revolver and the Zombie pistol with the highest ammo capacity.

The Alternator is a newer pistol in the Zombie Strike series and gives you the option to shoot one, two, or three darts at a time for some extra blasting power.

The Nerf Zombie Strike Dreadbolt is a zombie-slaying crossbow with five whistling arrows.

While Nerf crossbows are different and fun, the main issue is that they are harder to find and, therefore, quite expensive.

The bowstring is drawn back with the wrench priming handle, making it easy to slide an arrow on before firing.

All the arrows can be held on the top of a gun in the five arrow holster notches for storage.

A scope is included, but is slightly bulky and doesn’t magnify.

You are either a Nerf crossbow fan or not, and I love them because they add another cool element to the zombie fighting experience.

A much cheaper but also much more powerful off-brand bow option, shooting at over 130 FPS, and can be found in the green and orange zombie-themed colors.

The Nerf Zombie Strike series has a ton of awesome guns to choose from, and the guns on this list are all fun options.

Once you have found the right gun you are looking for, the other things I would recommend considering is picking up some Zombie Strike darts and checking out the Nerf sword and melee weapons. More ammo will help you prepare for those surprise zombie attacks, and a foam weapon can add to the Zombie fighting experience.

Also, be sure to check out our Nerf gun game ideas for some creative suggestions on how to put these sweet blasters to good use!