Why Was Morse Code Invented?

In the early 1800s, Before Morse code and the invention of the telegraph, there was still no real way to communicate over long distances quickly. The problem with the telegraph is that it could only send electric pulse signals and not direct voice or text messages.

Morse code was invented to communicate the English language through electric pulse signals via the telegraph. It allowed the translation of combinations of short and long electric pulses into letters and words. Morse code made instant long-distance communication possible.

Each letter of the alphabet and number was assigned a combination of short and long electrical pulse signals known as dots and dashes. A telegraph was used to send and record the signals on a piece of paper so the message could then be translated from Morse code to English.

Before the invention of this telegraph and Morse code, messages took days or weeks to deliver by horses, stages coach, or train. Afterward, lines were laid for telegraphs, and Morse code messages could be sent and received within minutes.

Now that you know why Morse code was invented, let’s look at who invented it and how they did it!

There are a few people who helped create and modify Morse code into what it is today.

When Was Morse Code Invented?

The code was developed and improved over a number of years starting in the 1830s.

The original Morse code was developed in the United States by Samuel Morse in the 1830s and later improved with the help of Alfred Lewis Vail into the 1840s. The International version, or the Continental Morse code, was created by Friedrich Clemens Gerke in 1848. This version had a few changes before becoming the International Morse code and standard by 1865.

The first version of Morse code, later known as American Morse code, was actually more complex than the International version, but the complexity meant that errors were more common.

There are three main differences between American and International Morse code: 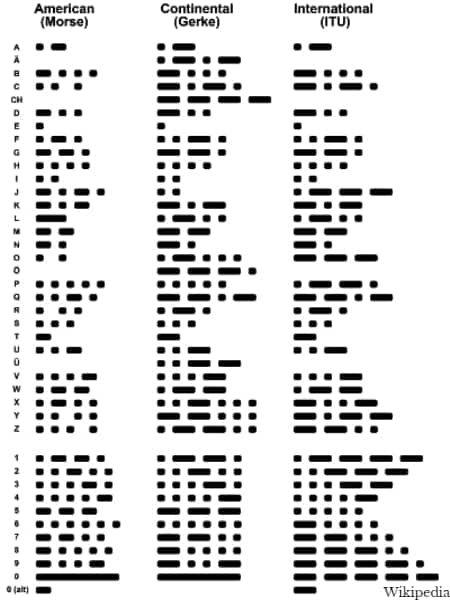 The multiple dashes within the American version actually made it more compressed, and it could be sent faster. However, the different lengths of dashes were harder to keep track of, and there were more dots to send, which meant more distortion for longer lines. This is the main reason why the International version became the standard for use across greater distances.

How was Morse Code Invented?

Some believe the motivation for creating a better, faster way to communicate came to Samuel Morse when tragedy struck his life in 1825. He was in Washington D.C when he received a letter informing him that his wife, Lucretia, was ill at their home in Connecticut. By the time he was able to get home, his wife had already passed away and was buried.

Morse was an artist by profession and an inventor who had already created a prototype of the telegraph before his wife’s death. There were many people around the world working on versions of telegraphs at the same time as the technology in them was pretty well understood. However, he was able to get his version of the recording telegraph working by 1838 and patented in 1844.

The invention of the recording telegraph by Samuel Morse, Alfred Vail, and Leonard Gale was a big deal that required the collaboration of all three of these great minds. However, it was of no real use if they did not have a code to use to make sense of the electric signals. 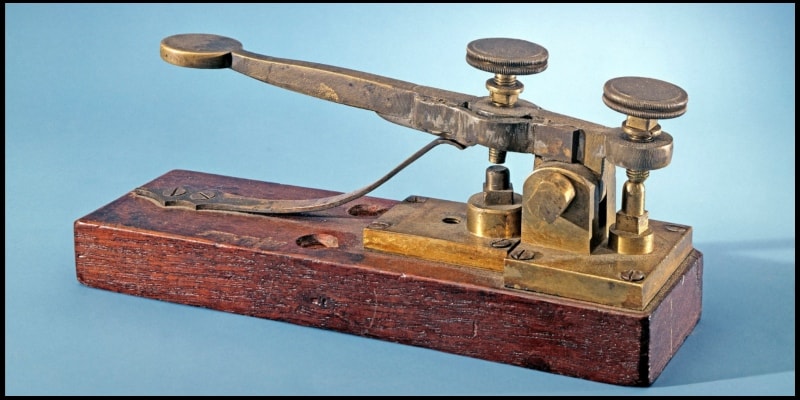 When the electric current hits the electromagnet on the receiving end, it spins a printing roller that prints the marks on paper. The sender can send a short dot by quickly tapping the key and a long dash by holding the key down longer.

All Samuel Morse really had to work with when trying to develop Morse code was differentiating the lengths of the signals he could send across the line. He started by assigning dot and dash combinations to just numbers but soon learned it was not enough to communicate how he wanted. It was Alfred Vail’s suggestion and work that helped Samuel complete the original Morse by helping with not only letters but also numbers and special characters.

Mr. Morse was then able to get government funding to build a telegraph line from Washington D.C. to Baltimore to test out his new invention and code.

Samuel F.B. Morse sent the first publicly recorded telegram in the US on May 24, 1844, which read “What Hath God Wrought?”. In front of members of congress, the message was sent from the US Capitol building to his partner Alfred Vail in Baltimore, Maryland, who received it and sent it back.

The telegraph took off from there with lines rapidly being built, and by 1961 the Western Union had completed the first transcontinental telegraph line across the US. Soon telegraph operators learned to recognize the code by ear and could send it by memory.

The code was eventually used wirelessly and played a critical role in history, even throughout the 1900s. People around the world have sent countless messages over land and sea using Morse code.

People still learn and use Morse code, but new technologies have made long-distance communication much easier and the telegraph obsolete over the years. The last official telegram was sent in 2013.